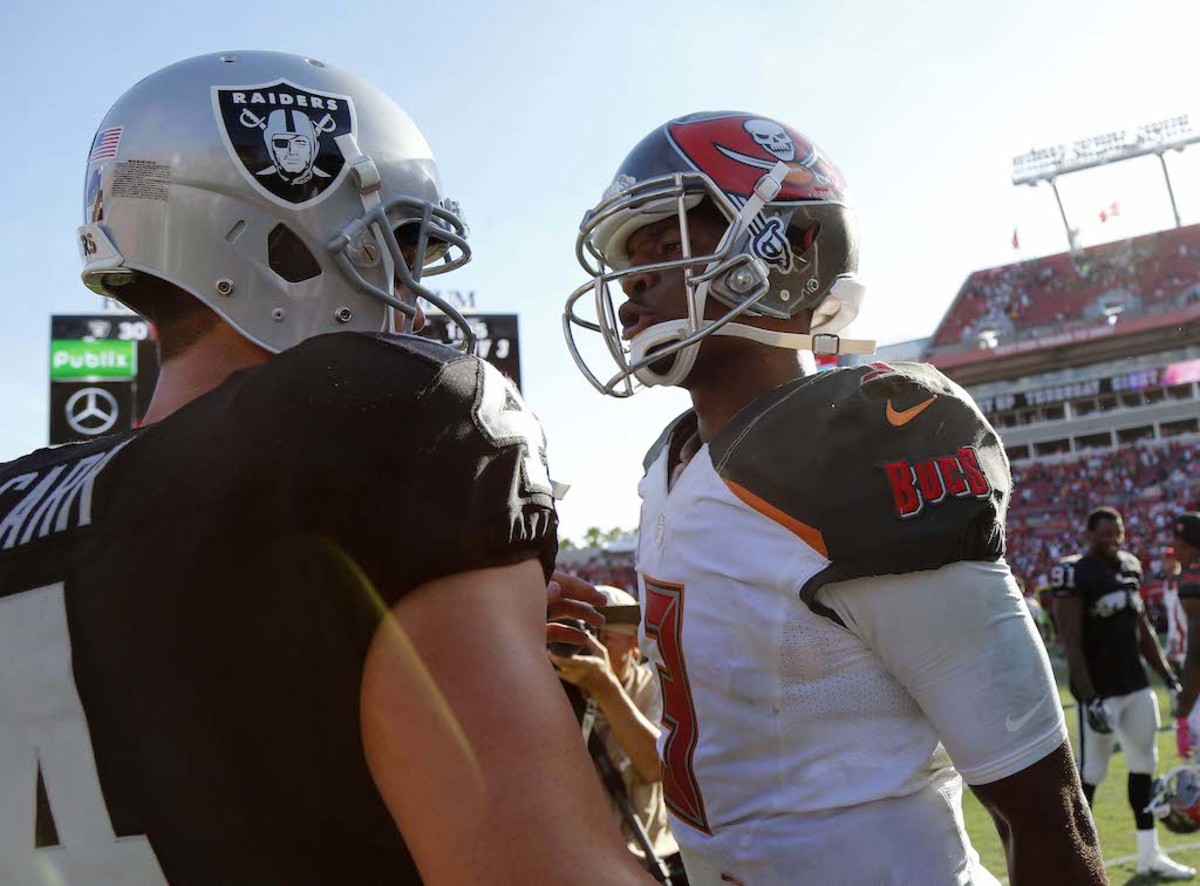 The NFL’s legal tampering period for pending free agents has been open for less than a day and there have already been a ton of announced signings and big trades. With so much movement happening in the NFL, it’s fair to wonder how many quarterback situations are going to change between now and the start of the 2020 season.

Let’s take a look at some starting quarterbacks from 2019 (at least at some point) and break down the odds that they’ll remain a starter with their current team or elsewhere in 2020. All odds courtesy of BetOnline.

As the Raiders franchise starts to barnstorm Las Vegas in 2020, a major question arises with the long-term viability of QB Derek Carr. Over six seasons in the NFL, Carr has 39-55 record with his best success coming in 2016 (12-3 with 3,937 passing yards and 28 TDs).

Under head coach Jon Gruden, Carr showed growth in his completion rate (68.9 and 70.4). Last year, he gained 8.0 yards per pass attempts (highest of his career), which ranked ninth in the league.

Now the question for the Raiders to answer is: can they win a Super Bowl with Carr as their quarterback?

In his career, Carr averages 1.5 TDs per game with a 2.3-to-1 TD-INT ratio. His value in passing touchdowns only beats half of the teams in the NFL, while his ability to minimize the damage in mistakes (0.66 INTs per game) does point to a winning game manager.

For Las Vegas to become a contender, they need better play by their defense, while hoping to build around a strong running game.

Josh Jacobs looked elite at running back despite playing through a shoulder injury. He should only be better this year with a chance to add many more catches to his resume.

Carr has a front-runner feel while being somewhat exposed when asked to run a one-dimensional offense. He can make all the throws, but his game does lose value in the red zone. In 2019, Carr completed 42 of 72 passes (58.3 percent) inside the 20-yard line with 15 TDs and two INTs. When moving inside the 10-yard line, his completion rate slipped to 50 percent.

In comparison, Brady had a 55.0 percent completion rate inside the 20 and 42.2 percent inside the 10-yard line.

The difference between a Derek Carr and say a Ben Roethlisberger, when he had Antonio Brown as his service, is trust. Carr would never throw the ball into tight coverage when Amari Cooper was on the team. Roethlisberger thrived when his best wide receiver looked covered, especially in the most significant moments of the game.

The bottom line here is the timetable for the Raiders to win. I don’t believe Tom Brady or Philip Rivers helps more than a couple of wins without upgrading the outside wide receiver talent.

Carr is a very good NFL quarterback. Will he ever win a Super Bowl? I believe that the answer comes from the overall strength of the team, which can be said for 75 percent of the teams in the NFL. In 2020, he’ll have another chance to show that he belongs behind center for the Las Vegas Raiders.

Jameis Winston looks to be headed out of Tampa with the Bucs gearing up for a big push toward Brady for the 2020 season.

This prop bet is a “no” for me. I expect Winston to find a new home, and I view him as the best replacement for Brady in New England.

The Bucs asked him to do a lot last year, which also led to a career-high in sacks (47). At times, he held the ball too long. Other times, he made some quick decisions without reading the defense correctly.

His completion rate (60.7) would go up dramatically with better usage of RBs in the passing game. It would also take some of the pressure off of him to make throws into tight coverage downfield.

I don’t envision Marcus Mariota earning a start in Week 1. He played his way into a backup role in 2019, and he’s had plenty of chances to prove his worth in the NFL. The improvement in points scored for the Titans with Ryan Tannehill under center should be enough for another NFL team to avoid placing a big bet on Mariota in 2020. I view him as a bench player that needs an injury to start going forward.

If Cam Newton is healthy, he’s starting in Week 1. Kyle Allen was fun for a few games, but his luster began to fade over the second half of the year.

The Nick Foles experiment looks to be over in Jacksonville, which gives Gardner Minshew a window to show he can be a starter in the NFL. He has a winning feel with some fight to his game, but that may not be enough to keep the job long-term. As the calendar rolls toward the NFL draft, it’s Minshew’s job to lose.

Jacksonville does pick ninth overall in this year’s draft, so a move toward a franchise QB should be in the discussion in the pre-draft war room. The problem for the Jaguars is the contact of Foles. If they can’t move him before draft day, Jacksonville will have to bring him back in 2020.

Dalton is a winning NFL QB (70-61-2) with four trips to the postseason. He should draw some value in free agency as a backup QB with a chance to bridge a team to a rookie QB.

The Bengals didn’t play well last year, which lessens his attraction to another NFL team after going 2-11. I would go with “no” as the choice for him starting in Week 1.

Who Will Start Season as Chargers’ Quarterback?