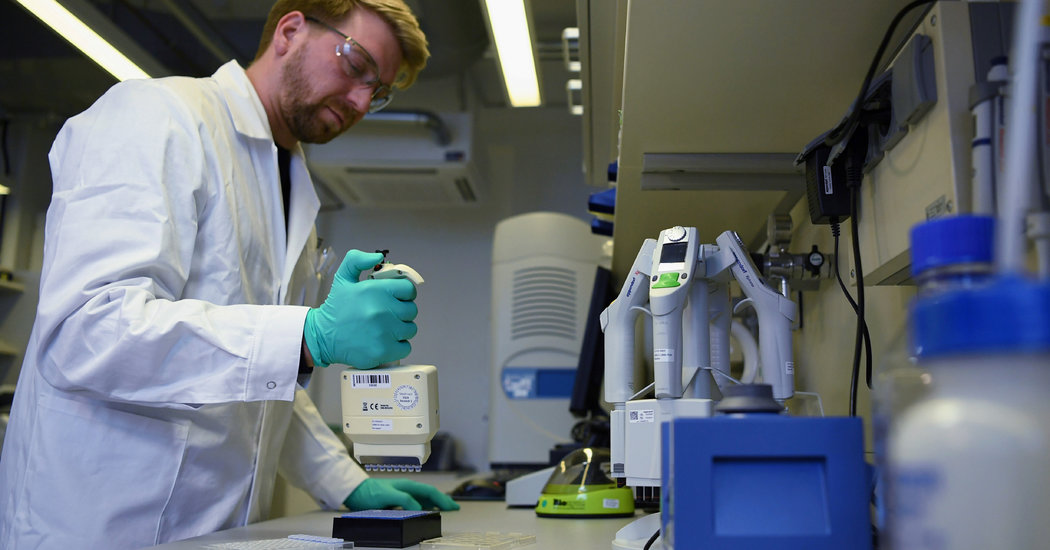 BERLIN — The Trump administration attempted to persuade a German firm developing a possible vaccine for coronavirus to move its research work to the United States, German officials said, raising fears in Berlin that President Trump was trying to assure that any inoculation would be available first, and perhaps exclusively, in the United States.

The offer arose from a March 2 meeting at the White House that included the chief executive of the German firm CureVac, Daniel Menichella. President Trump briefly attended the meeting and Vice President Mike Pence, who heads the White House coronavirus task force, was also there.

“We are very confident that we will be able to develop a potent vaccine candidate within a few months,” Mr. Menichella said in a statement on the day of the meeting.

But four days ago, CureVac announced that Mr. Menichella, an American, was leaving the biotechnology company, which he had headed for two years.

The announcement gave no reason for his sudden departure and said one of the firm’s founders, Ingmar Hoerr, would succeed him. It thanked Mr. Menichella for a variety of accomplishments, including “the recent start of our coronavirus vaccine program.”

On Sunday, the company issued a statement in Germany describing its vaccine work. “CureVac refrains from commenting on current media speculations and clearly rejects claims about the sale of the company or its technology,” it said.

White House officials did not immediately respond to requests for comment. But two senior American officials said that some of the German news accounts first reporting the story were overblown, particularly with regard to any effort by the United States to secure exclusive access to a vaccine.

The Trump administration has spoken with more than 25 companies that say they can help with a vaccine, one of the American officials said, and is open to speaking with others. Any solution, he said, would be shared with the world.

Nevertheless, Germany’s interior minister, Horst Seehofer, said that Chancellor Angela Merkel, who has a famously testy relationship with Mr. Trump, will lead a crisis meeting with ministers on Monday that will include discussion of a German defense strategy for the firm.

The coronavirus is no longer merely a health crisis, but “a question of national security,” Mr. Seehofer said Sunday. It is up to the government, he said, to ensure not only security of its borders and its food supply, but also “our medical products and our medicines.”

Asked by a reporter to confirm that the U.S. administration had tried to take over a German company researching vaccines, Mr. Seehofer responded that he had heard about the effort “from several members of the government and it will be discussed tomorrow in the crisis team.”

Another official, who asked not to be identified because he is not authorized to speak to the media, said the company was offered a “large sum” of money.

The privately held biotechnology firm has its headquarters in the southwestern city of Tübingen, Germany. It also has an office in Boston, where many of the nation’s leading biotech firms have operations around the Harvard and Massachusetts Institute of Technology campuses.

According to the German newspaper Die Welt am Sonntag, which first reported the story on Sunday, Mr. Trump offered CureVac roughly $1 billion in exchange for exclusive access to the vaccine. The newspaper quoted an unnamed German government source who said Mr. Trump wanted the resulting vaccine “only for the United States.”

But another German official, reached by The New York Times, said it was unclear whether the administration simply wanted the research work, and for any resulting production to be on American soil.

Mr. Menichella was one of several industry executives invited by the White House to meet Mr. Pence, members of the coronavirus task force and pharmaceutical executives and discuss strategies to quickly develop a vaccine, the company said on its website.

CureVac started research on a number of different vaccines and is now picking the two best prospects for clinical trials, the firm’s website indicates. The company hopes that by June or July it will have an experimental vaccine that could go into trials. Many other companies are also working on vaccines.

The Trump administration has been unusually aggressive in attempting to get American control of companies that deal in technology Mr. Trump views as central to American security.

In February, Attorney General William P. Barr suggested in a speech that the United States should find a way to take over two European telecommunications makers, Ericsson and Nokia, which are the main competitors of Huawei, the Chinese telecommunications giant that is wiring up nations around the world for 5G, or fifth generation, networks.

Mr. Pence later played down that suggestion. But the idea that the Trump administration was seeking to take control of a major European technological asset sent unsettling ripples across Europe.

And the move to secure the intellectual property of CureVac, whether for exclusive or general use, is bound to inflame that debate.

Die Welt reported that the German government was making counterbids to the company to persuade it to stay. German lawmakers began to issue statements on Sunday.

“The exclusive sale of a possible vaccine to the USA must be prevented by all means,” Karl Lauterbach, a German lawmaker who is also a professor of epidemiology, said on Twitter. “Capitalism has limits.”

Adding to the dismay in Germany was the fact that CureVac works closely with a taxpayer-funded government research organization, the Paul Ehrlich Institute for vaccines and biomedicines.

Peter Altmaier, Germany’s economy minister, praised the company for not being tempted by any American. offer. “It was a great decision,” he said in a television talk show on Sunday night. “Germany is not for sale.”

Mr. Altmaier said the government would “make sure that the necessary help is available” to the company in developing the vaccine. And he warned that if any hostile offer was attempted, Germany would step in.

“When it’s about important infrastructure and national and European interest,” he said, “we will also act if we have to.”

CureVac’s main investor ruled out giving exclusive access to a future vaccine to one country.

“We want to develop a vaccine for the whole world, and not for individual states,” Christof Hettich, chief executive of Dievini Hopp Biotech Holding, told the newspaper Mannheimer Morgen.

German officials sounded unsure about the reassurances that the United States would share a vaccine if it were developed.

A spokesman for the German health ministry said that German government officials were in regular contact with CureVac, confirming a quote in the original Die Welt article.

“The federal government is very interested in vaccines and antiviral agents against the novel coronavirus being developed in Germany and Europe,” the spokesman was quoted as saying in the original article. “In this regard the government is in an intensive exchange with the company CureVac.”