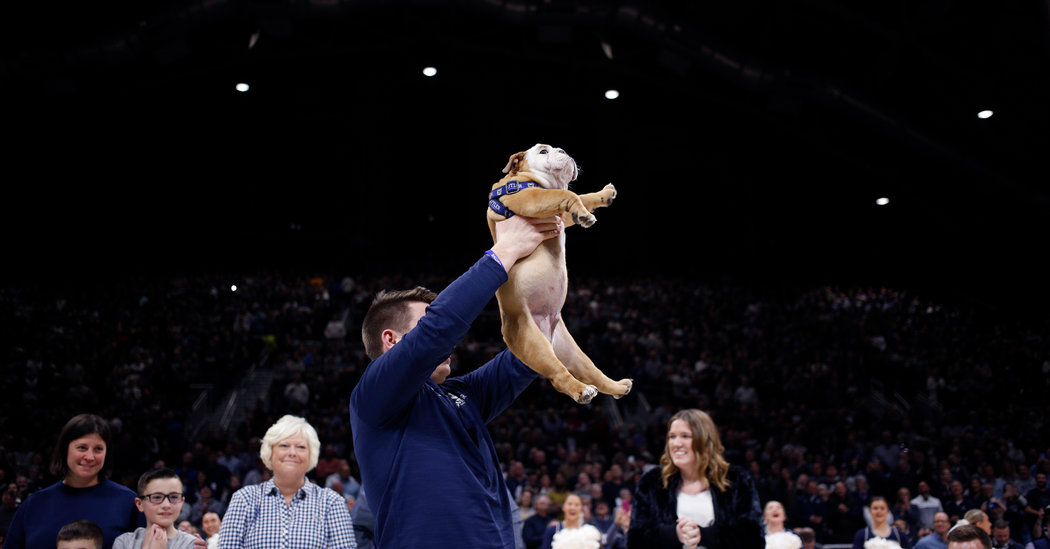 INDIANAPOLIS — The star-in-waiting could not exactly hustle to class at the strip mall.

“Is he asleep?” Evan Krauss, a mascot handler, asked his wife just before he answered his own question. “Of course he is.”

And so someone carried Butler’s next ambassador inside for his lessons under the bright lights of the Bark Tutor School for Dogs. It takes practice to perfect sitting and staying.

There are many displays of such skills to come for Blue IV, the English bulldog primed to spend much of this decade as the plodding, slobbering symbol of Butler University after a winter in school himself, learning the basics of puppyhood so he can meet the rigors of mascot life. He will take over in May after a process — of planning for his predecessor’s retirement, of evaluating, of selecting, of training — that will have lasted more than a year.

Now, the final stages of the transition are unfolding with Butler, like other universities confronting the coronavirus pandemic, in flux. The university has closed its dorms until at least April 4, athletics facilities have been shuttered and competitions canceled. Commencement, which was expected to be the last major public appearance for Blue’s predecessor, Trip, is “expected to proceed as planned as of now,” though that could change.

Once students and sports return, Blue will be waiting, Butler having spent more time choosing a mascot than the College of Cardinals does electing a pope. But there are plenty of reasons for being deliberate: In the age of social media and internet memes, picking the right animal — independent-minded, photogenic and hopefully not prone to biting — to be a university’s most public embodiment could be the difference between encouraging applications or inviting the kinds of encounters that would embarrass any pet owner.

“You want to try to find a dog who is fit for the role, and who would thrive in the role,” said Michael Kaltenmark, Trip’s handler. “They really bring our institutional brand to life quite physically: You can touch them and you can feel them and you can get a vibe from them — it’s usually very happy and fun and loving and warm — and that perception translates to the institution itself.”

At least that is the ambition. And so prompts Butler’s long transition from one dog to another, and the growth of a puppy into a TV-ready star.

Dogs (OK, their handlers) plan for retirement, too.

Butler first unveiled a live mascot about 20 years ago, but it was Blue II, who was born in 2004, who became what the university described as its “most decorated and beloved bulldog.”

You might remember him: He was the mascot for Butler when it reached the national championship game in two consecutive seasons. He became mascot emeritus in 2013 and made way for Trip, short for Triple, who came to like the bananas and popcorn at Hinkle Fieldhouse. The expected life span of English bulldogs, though, led Butler to begin deliberating over his replacement last year, looking past the sporadic complaints of animal rights groups that have sometimes condemned live mascot programs across the country.

“We wanted to retire the dog prior to him showing any massive changes in his age or his ability,” said Kurt Phillips, a Butler alumnus who is the veterinarian for the university’s mascot program. “We knew probably last summer that this would be Trip’s last basketball season.”

The word went out that Butler was seeking a new bulldog, and the calls and emails began. Phillips began to vet — no pun intended, he claimed — breeders and their dogs, conducting examinations and scouring medical records. He said he turned away more than a half-dozen hopefuls before settling on a dog who, he would soon learn, would have a litter of three. He had expected four to six.

“When we counted a small litter size, we all looked at each other and said, ‘Oh geez, let’s hope there’s a good one in here,’” he recalled recently.

The dogs arrived in late October with the new handler, Krauss, a canine-allergic Butler alumnus who had never had a dog himself, present for the delivery. The scrutiny was only beginning.

Krauss visited the puppies twice a week, testing their temperaments. Were they willing to be held? Were they open to spending time with people? And could they pose for cameras?

“We held many photo shoots with all three dogs before Blue was chosen,” Krauss said while the dog he favored early on in the process snored a few yards away. “Blue would sit for 20, 30 frames.”

The others, Krauss said, would pause for a picture or two and resume “puppy stuff.”

In December, the university settled on Blue because one of the other dogs had a respiratory condition and another one was “really kind of obnoxious,” as the veterinarian put it.

“He was proportional in his looks,” Phillips said as he rattled through Blue’s attributes. He added, “This is a dog that’s going to have millions of hands on him by the time he retires, and he’s got to be a dog who will allow that.”

There was also something about him having a great tail.

The ‘mascot-in-training’ learns the job.

It is not clear whether Blue knew what he was getting into. At Butler, the live mascot gig involves more than basketball games; it is also a regular cycle of off-campus appearances — for $100, the bulldog will show up at your wedding — and for university acceptance letter deliveries, like the ones Trip handled for more than 300 students in at least 21 states.

And so once he was officially deemed the “mascot-in-training,” Blue began to learn the job. Around the Krauss house and in the car headed to and from campus, the new handler would blast a playlist of music used at basketball games. He’d bang pots and pans, invite surprise visitors, ring the doorbell and let Blue be around children (as well as a St. Bernard).

Krauss added: “We had him in a very controlled environment where we knew we’d be setting him up for success.”

Butler announced Blue’s succession in January, thrusting the dog into the limelight. The training went on. Every weekday, and sometimes in the evenings, he’d visit Bark Tutor, just another dog enrolled in puppy school.

The priority, Krauss said, was having a dog who would not jump on humans. The second was teaching sitting and staying, “the bread and butter of a mascot.”

“From there, it’s the weird stuff: running on a basketball court to a rawhide bone,” Krauss said. He had already begun watching Trip during games; over the summer, though, Krauss and Blue will work together in a noiseless, empty arena. Then they’ll start trying to simulate games by pumping in music and adjusting the lights.

“He needs to have a much stronger ability to disengage from distractions since he’s going to be at places with a lot of noise, a lot of people, a lot of smells,” said Nick May, a Bark Tutor trainer. “Any dog can do a sit in a sterile environment with nothing going on; it’s difficult to have a reliable dog when there’s everything going on.”

Indeed, he is still a puppy for now. One evening over the winter, Blue meandered around the training floor at Bark Tutor. He sat. He stayed. He peered at his reflection in the window, and he peed on the floor. He posed for a picture before he was carried back into the night.

Trip was elsewhere, going through the waning months of his tenure and preparing for retirement. There were plans for another adventure to New York, another stop at Madison Square Garden for the Big East tournament, another opportunity for Trip to teach Blue.

Then the pandemic swept across the country. The trip was canceled.

“It was our chance to make one last splash this season,” Kaltenmark wrote in an email on Friday morning. “Instead, we watched from our desk chairs and couches as the season fell apart.”