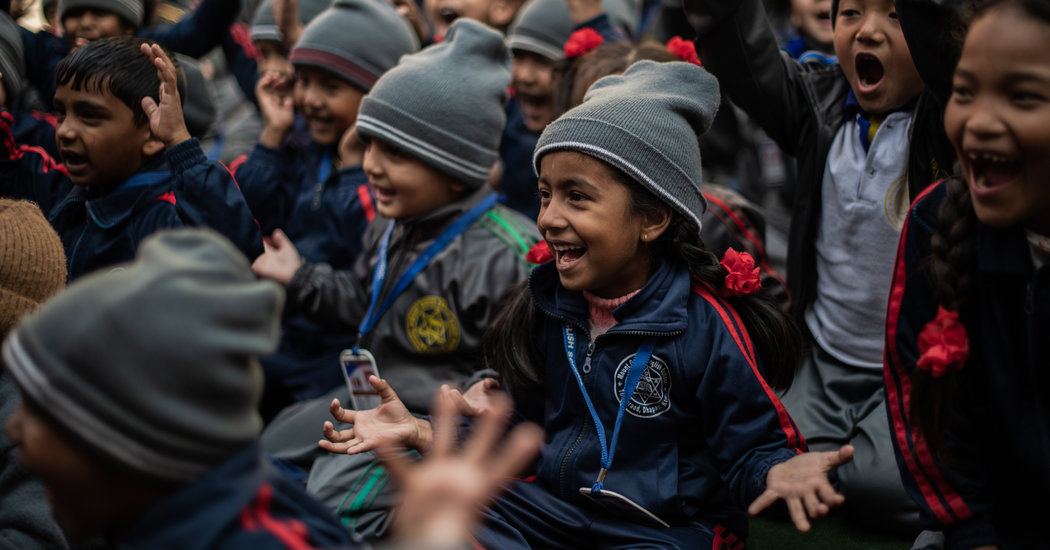 KATHMANDU, Nepal — A group of Nepali teenagers sat cross-legged at Bagmati Boarding School — palms up, eyes closed, sinking into the floor with each breath.

An instructor began walking the students through meditation and vigorous physical exercises, culminating in a series of head and shoulder stands.

“Yoga has really helped me care for myself,” said Abhiyan Bhatta, 15, who said he struggled with knee problems for years before enrolling in yoga lessons at the school in Kathmandu, Nepal’s capital. “I have healed my pain.”

That was an elective class, but yoga will soon be more than an extracurricular activity in Nepal. Next month, when the new academic term begins, this small Himalayan country will become the first in the world to make it a required subject nationwide.

Hundreds of thousands of elementary and junior high students will enroll in a new, weekly yoga course. Along with math, science, the Nepali language and English, the revised curriculum will teach students about the history of yogic thought, along with lessons on Ayurveda and naturopathy, a kind of alternative medicine that promotes self-healing.

“Yoga is our ancient science,” Giriraj Mani Pokhrel, Nepal’s education minister, said in an interview. “We want students to learn it, and we think this is the right time.”

School yoga programs have caught on around the world. In the United States, hundreds of public schools allot time for students to practice deep-breathing techniques and stress reduction exercises. In India, Nepal’s neighbor and a birthplace of yoga, some colleges and government schools already require students to take such courses, though it is not a national policy.

But the new yoga requirement in Nepal has invited criticism in a region where the exercises are seen as inscribed with religious and ideological meaning, and increasingly intertwined with the rise of Hindu nationalism.

Muslim groups have resisted chanting “Om,” a sacred sound in Hinduism, or performing the sun salutation, which they argue violates the monotheistic nature of Islam.

In India, where Prime Minister Narendra Modi’s government has pushed a Hindu-first agenda, sun salutations and Sanskrit chants are regular features of military-style drills performed by Hindu nationalist groups. The daily shakhas, as the drills are known, were designed to nurture a pan-Indian “national consciousness.”

The far right has yet to find the same foothold in Nepal, a secular democracy with a large Hindu majority. Nepal is caught between India and China, which are often at odds, and diplomacy is tricky.

Though Nepal has traditionally been close to India, in recent years, Chinese investors have pumped millions of dollars into the country. Under Prime Minister K.P. Sharma Oli, Nepal has moved away from dependence on India, despite close cultural and religious ties.

Still, Nepal’s Muslim activists said they would protest the mandatory yoga course if students were required to do the sun salutation, a sequence of 12 poses dedicated to the Hindu god Surya, which government officials said was part of the new curriculum. And school administrators said they were still trying to figure out how the course would work in practice.

The country is short on qualified yoga instructors, they said, and the government did not consult teachers before announcing the new class, which will replace physical activities and games like “hide the handkerchief.”

“Making anything mandatory that relates to one particular religion is against the spirit of the Constitution,” said Nazrul Hussein, a former president of the Nepal Muslim Federation. “We cannot do the sun salutation and they should not link religion with health.”

Nepali officials pointed that the government that changed the curriculum is led by the Nepal Communist Party, not by hard-line Hindus. They noted that only students in grades four through eight would be required to take the yoga class, and they said its focus was on promoting an active lifestyle. Older students can take the course as an elective.

Ganesh Bhattarai, the director of Nepal’s Curriculum Development Center, the government body that designed the class, said it was not meant to favor any particular religion. Chanting “Om” is not part of the course, and students can skip the sun salutation if they feel uncomfortable, he said.

“This course is for mass education,” he said. “Content against any religion is edited out.”

Some students said they were ready for the new addition to their school day.

As the yoga lesson ended at Bagmati Boarding School, the 30 or so students adjusted their uniforms, scribbled in notebooks and laced up their shoes.

“I am so excited for this class,” said Shristi Tamang, a 14-year-old student. “Yoga is the art of living.”