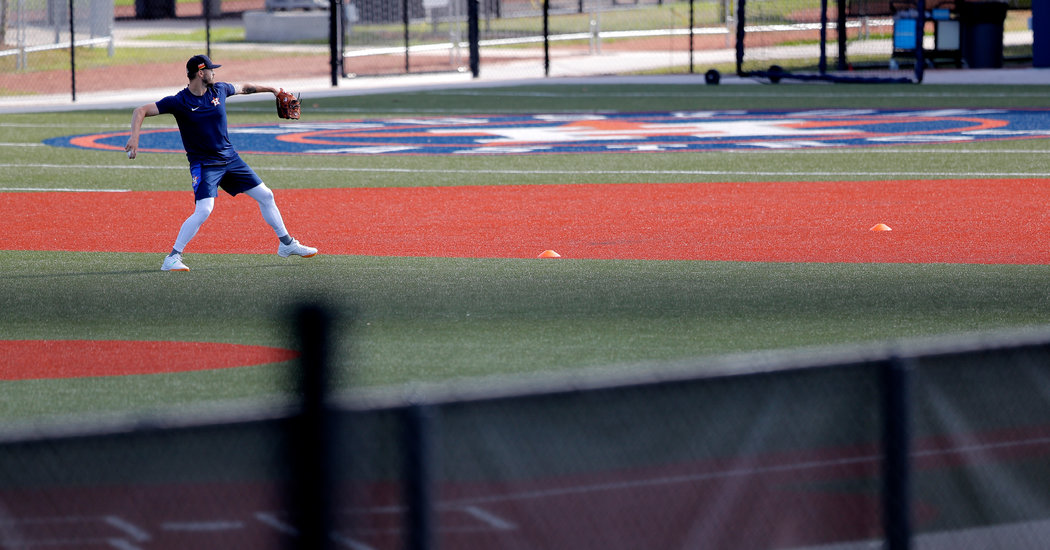 Major League Baseball officially acknowledged the obvious on Monday, pushing back opening day again — this time indefinitely — as it grappled with how to rearrange the season in response to the coronavirus pandemic.

Opening day, originally scheduled for March 26, was postponed last week to roughly an April 9 target. Now, M.L.B. is offering only a vague pledge to play as many games this year as possible.

Monday’s announcement came in response to Sunday’s recommendation from the Centers for Disease Control and Prevention to restrict events to no more than 50 people for the next eight weeks; that guideline is one of the reasons the league is trying to limit the number of players working out at spring training facilities.

League and union officials were scheduled to hold talks later on Monday to sort through several issues affecting player contracts, including adjustments for service time, incentive clauses and the likely implementation of a freeze on transactions. But everything hinges on an essential question that cannot be answered: Assuming there is a season, when will it begin and how long will it last?

M.L.B. has not officially eliminated the idea of playing a full 162-game schedule, but privately, officials acknowledge that will almost certainly not happen if the C.D.C. maintains the eight-week timetable. The league would essentially be on hold until early- to mid-May, and teams would then need two or three weeks of spring training — at their camps in Florida or Arizona, or perhaps at their home ballparks — before the regular season could start.

While some officials hold out hope of opening the season by the middle of May, starting around Memorial Day (May 25) or early June seems more likely, probably with rosters initially expanded beyond the usual 26 players. The regular season is scheduled to end on Sept. 27, and one scenario under consideration is to make up some games after that and extend the postseason into November.

“We’re not going to announce an alternate opening day at this point,” Commissioner Rob Manfred told The St. Louis Post-Dispatch at the Cardinals’ complex in Jupiter, Fla., where he conducted a conference call with owners. “We’re going to have to see how things develop. I think the commitment of the clubs is to play as many baseball games in 2020 as we can, consistent with the safety of our players and our fans.”

The N.H.L. seemed to acknowledge a similar rough estimate on Monday — that games won’t start again until May at the earliest. In a statement, the league said it hoped to soon provide guidance “on the potential of opening a training camp period roughly 45 days into the 60-day period covered by the C.D.C.’s directive.” In that best-case scenario, training camps would begin in early May, with a resumed regular season or playoffs to begin afterward.

On Sunday, M.L.B. instructed players who are not on a 40-man roster to leave spring training complexes and return home, though the Yankees are keeping their minor leaguers under a two-week quarantine in Tampa, Fla., because one player has tested positive for Covid-19, the disease caused by the coronavirus.

Players on 40-man rosters have also been encouraged to return to their off-season homes, but for now M.L.B. cannot deny access to facilities for those players. Some are rehabilitating from injuries and need access to team trainers, and others may live in areas where travel is impractical. But the league will try at least to limit the number of players working out at the same time.

Manfred said he “emphasized with the clubs that there should be no organized activities in the camps.”

“We did agree with the M.L.B.P.A. that spring training sites would remain open — but the thought there is with a skeleton crew,” he continued. “Really, to give players some place to use a gym as opposed to being forced out into a public gym and the like. We’re really encouraging players to make a decision where they want to be over an extended period of time and get to that location as soon as possible.”

The league and the union also announced that they were making a joint donation of $1 million to help fight hunger resulting from school closures and quarantines. The funds will be split evenly between Feeding America and Meals on Wheels America.