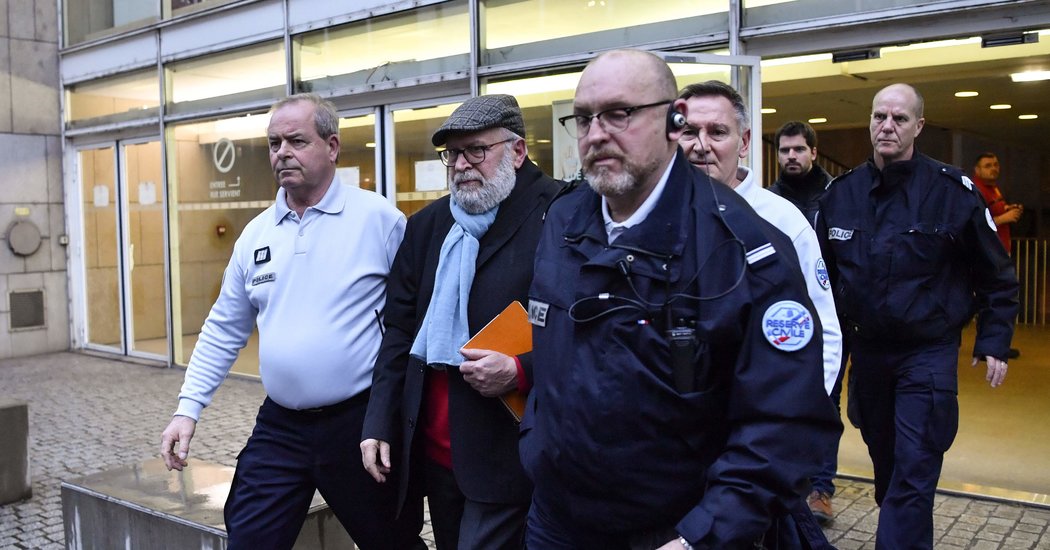 PARIS — A former Roman Catholic priest in France was convicted and sentenced on Monday to five years in prison for sexually assaulting dozens of Boy Scouts several decades ago, in a case that embroiled a top cardinal in the country’s growing reckoning with clerical sexual abuse.

The former priest, Bernard Preynat, 75, was found guilty by a court in Lyon, in central France, according to his lawyer, Frédéric Doyez. Prosecutors had asked for an eight-year sentence, slightly less than the maximum 10 years for such offenses.

The hearing for the verdict was held behind closed doors in Lyon after the French authorities enforced new restrictions on public gatherings because of the rapidly spreading coronavirus epidemic.

Pierre Emmanuel Germain-Thill, one of Mr. Preynat’s victims, told Agence France-Presse that the sentence was “correct” given the former priest’s age.

“I am very relieved by this ruling,” Mr. Germain-Thill said. “We want to turn the page of this affair and continue to build our lives.”

Mr. Doyez, the lawyer, said in an email that he was considering an appeal but that it was ultimately Mr. Preynat’s decision. Under French law, Mr. Preynat has 10 days to appeal the conviction.

Mr. Preynat was accused of using his position as a Boy Scout leader to sexually abuse dozens of boys from the 1970s to the 1990s. A church tribunal pronounced him guilty of the abuse last year and stripped him of his clerical status.

At the criminal trial, held in January, Mr. Preynat admitted to some of the abuse and asked for forgiveness, testifying that as a scout chaplain he had abused as many as two boys “almost every weekend” and as many as four or five a week on camp outings — although he said he did not remember some of the specific acts that the victims had accused him of.

“For me, at the time, I was not committing acts of sexual assault but caresses, cuddles,” Mr. Preynat said at trial, according to news reports. “I was wrong.”

Many of the accusations against Mr. Preynat were past the statute of limitations, and only a few of victims were plaintiffs. But the case against him, which first emerged in 2015, led to a much wider indictment in France of the Catholic Church’s culture of silence about sexual abuse allegations.

Attention quickly focused on Cardinal Philippe Barbarin, then the archbishop of Lyon — one of France’s highest-ranking clergymen.

Although the abuse occurred before Cardinal Barbarin was appointed to his post in the Lyon Diocese in 2002, some of Mr. Preynat’s victims accused the cardinal of having failed to report the allegations to the authorities when they were brought to his attention. During his trial, Mr. Preynat testified that senior church officials had been aware of the abuse but had done nothing to remove him from office.

Cardinal Barbarin later acknowledged that he had heard about the abuse as early as 2010, but he said that he had personally questioned Mr. Preynat at the time and had left him in office after receiving assurances that no abuse had occurred since 1991. Mr. Preynat was removed from office in August 2015.

Prosecutors dropped charges against Cardinal Barbarin in 2016 after an investigation, but some of Mr. Preynat’s accusers used a special procedure to force the cardinal to stand trial.

The cardinal was found guilty last year of failing to report the abuse, but was acquitted in January on appeal. His resignation was accepted by Pope Francis this month.

During his trial, Mr. Preynat said for the first time that he had himself been the victim of abuse by clergymen in his youth, though lawyers for some of the plaintiffs said that they were skeptical of that last-minute allegation, calling it yet another lie from a man who for years had evaded punishment for his crimes.

An independent commission created by the Bishops’ Conference of France to shed light on sexual abuse by the country’s clergy has already heard from thousands of people reporting such cases, and a report is expected in 2021.