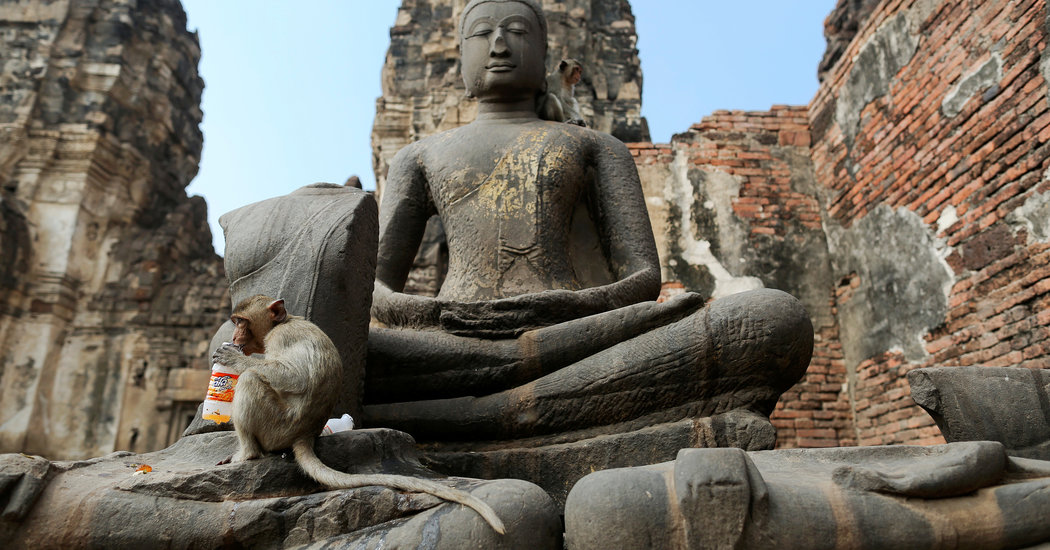 In a video posted last week, a mob of monkeys runs around a city plaza in Thailand. Something gets thrown in the macaques’ midst and they break into a giant brawl.

This horde of animals lives in Lopburi, home of the country’s Phra Prang Sam Yot monkey temple. The macaques, which are usually fed by tourists visiting the city, are finding a new scarcity because of the coronavirus. And they’re not alone. Large populations of wild animals are sustained almost entirely on treats handed out by tourists in a variety of Asian countries. But over the past few weeks, the flow of tourists has been reduced to a trickle as a result of quarantines, travel restrictions and a general reduction in visitors put in place to stop the spread of the illness.

Now, for better or worse, thousands of animals are being forced to fend for themselves.

Although fights between the macaques of Lopburi are not uncommon, a brawl of the magnitude shown in that video suggests that resources are scarce, said Asmita Sengupta, an ecologist at the Ashoka Trust for Research in Ecology and Environment in Bangalore, India, who studies the effects of humans feeding macaques, which remain wild animals even if they live in close quarters with people.

“The fall in tourist numbers because of Covid-19 may have indeed brought about a shortage of food supply for them,” she said. That shows that feeding the monkeys “can have detrimental effects. Once they get used to being fed by humans, they become habituated to humans and even display hyper-aggression if they are not given food.”

The number of tourists from China, Thailand’s biggest source of tourists, fell 85 percent last month, according to the Tourism Authority of Thailand. And it isn’t the only country where the steep reduction in visitors could be affecting some wildlife.

In Nara Park, a popular Japanese attraction, tourists line up year-round to feed and take selfies with the park’s large population of sika deer. For only $1.85, visitors can buy a stack of rice crackers to feed the deer, some of which have been trained to bow on command.

Over 1,000 deer currently occupy the 1,240-acre park, and they rarely venture outside of its boundaries. However, in the weeks since the Japanese government implemented travel restrictions and began quarantining visitors from China and South Korea, the park has become devoid of tourists and its deer have begun wandering into the city in search of food.

In photos and videos posted on Twitter and Weibo, herds of 10 to 15 deer can be seen trotting through city streets and subway stations, dodging traffic and eating people’s potted plants.

Although these deer are protected under Japanese law, they face myriad dangers when they roam outside of the park, including being struck by cars or dying from ingesting plastic bags.

While some residents of Nara might feel that they should start feeding the deer, that may not be prudent, said Christopher Schell, an urban ecologist at the University of Washington in Tacoma.

“The best thing we can do for these animals is to leave them alone,” Dr. Schell said. When people feed wildlife in urban environments, they inadvertently create high densities of animals in places that would otherwise be unable to support them.

Whether the recent decline in tourism across Asia will reduce the numbers of deer in Nara or macaques in Lopburi remains to be seen. But Dr. Schell remains optimistic.

“Most animals living in urban environments already have flexible diets, so chances are good that a lot of these animals are going to be OK,” he said.