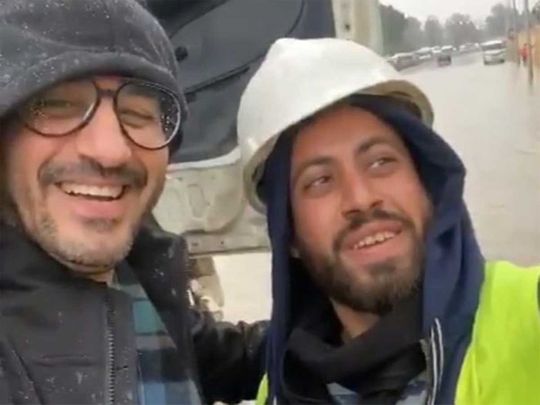 Ahmed Helmy took to the flooded streets of Egypts to thank relief workers for their efforts, seen in his latest Instagram video uploaded on Friday.

At least 20 have been killed due to the torrential ran that battered the country on Thursday and Friday.

The Egyptian actor, however, kept his spirits up despite the dire situation and tried to spread cheer on his social media account.

In a video, Helmy had his hood up as rain continued to fall. He was surrounded by muddy waters as he put his arm around what looked to be a relief worker, who was wearing a white hard hat and a neon green safety jacket.

“Come this way so that our background will be the sea,” joked Helmy, manoeuvring the man to one side. “Come, come, our background is the water. I swear, it’s a great view. Should I take a photo of us, or will you? Let’s both take a picture at the same time.”

After they snapped a selfie, Helmy told the man: “I swear to God, that’s the best picture. God be with you.”

The 50-year-old actor and ‘Arabs Got Talent’ judge, who has more than 11 million followers on Instagram, captioned the post: “God be with you and may he help you.”