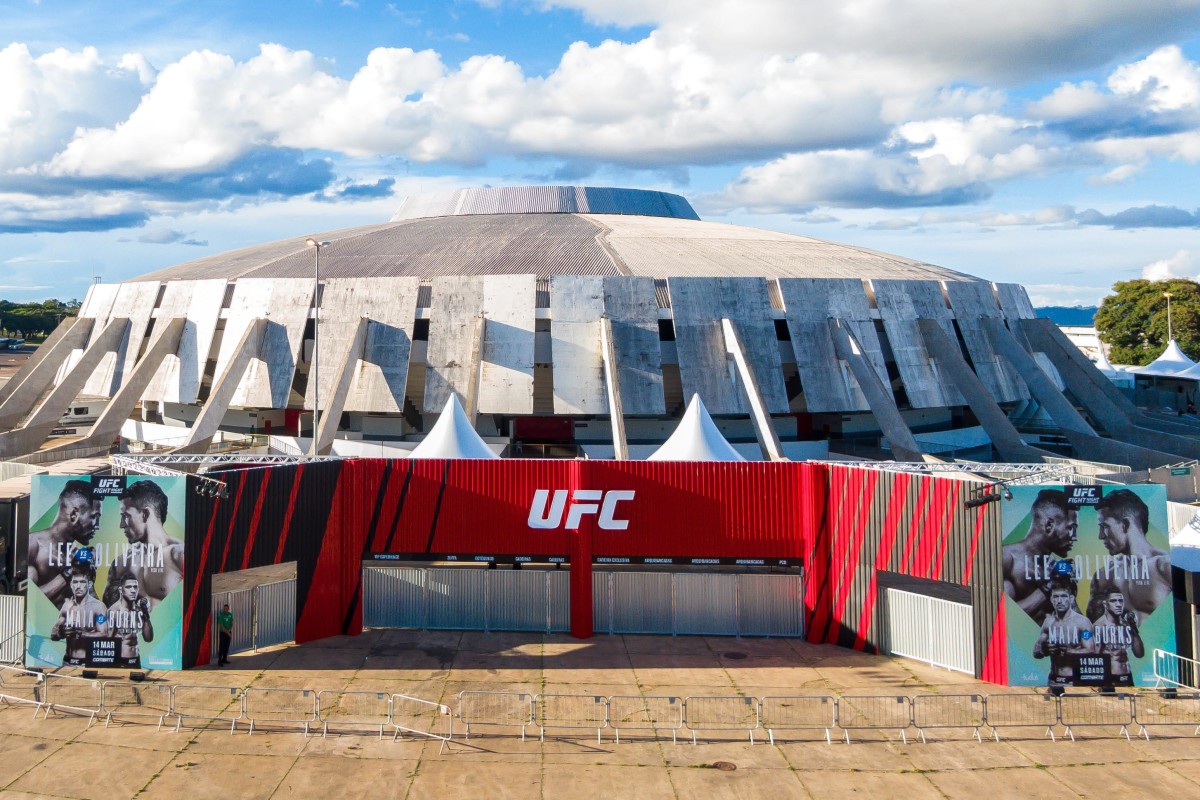 BRASILIA, Brazil (AP) — The UFC staged a full fight card in an empty arena Saturday night in Brazil’s capital city, sticking to its plan to keep fighting in the face of the coronavirus pandemic.

Charles Oliveira stopped lightweight Kevin Lee with a guillotine choke in the third round of the main event in the UFC’s first show since many other sports organizations around the world postponed and canceled competitions.

The world’s biggest mixed martial arts promotion held 12 bouts in Brasilia with only the fighters, their camps, the television production crew and a few dozen essential personnel inside Nilson Nelson Gymnasium.

“It was a bit weird not having any fans inside the arena,” said Bea Malecki, a Swedish bantamweight who won a decision over Veronica Macedo in the show’s opening bout. “But I was able to hear everything my coaches were saying, and it was good. Sometimes it is so loud out there. It was a crazy week. We didn’t know if the fight was going to happen or not, but we stuck to the plan. It was really emotional.”

The UFC also plans to stage a show with fans inside London’s O2 Arena next weekend, and it intends to hold fan-free shows in Las Vegas on March 28 and April 11. UFC President Dana White has claimed the sports world is “panicking” with its cancellations.

Oliveira (29-8) ended the show by finishing Lee (18-6), a former lightweight title contender who missed weight for the bout. Oliveira has won seven straight fights by stoppage, and the Brazilian veteran’s celebratory screams echoed through the empty arena.

In the show’s penultimate bout, Gilbert Burns knocked out Brazilian jiu-jitsu specialist Demian Maia, who hadn’t lost by stoppage in 25 fights since August 2009 at UFC 102.

The absence of fans led to a unique atmosphere. The UFC still played its fighters’ walk-in music as they walked to the cage, and ring announcer Joe Martinez declaimed the fighters’ names with no fans in attendance to hear it. After conducting an in-cage interview, UFC broadcaster Michael Bisping instinctively exhorted the absent crowd to “Make some noise!”

The absence of crowd energy perhaps played a role in the card’s first nine fights all going to decisions. Brazil’s Jussier Formiga lost a narrow unanimous decision to Mexican lightweight Brandon Moreno in the type of close bout that might have been influenced by thousands of fans cheering for the home fighter.

“I’m very frustrated because today I fought in my hometown, and I don’t see nobody,” Moicano said. “I didn’t see familiar faces. I didn’t see my family over here. I don’t know what to say.”

The atmosphere outside the arena was equally strange. The UFC had already erected signage and cordoned off gathering areas normally placed outside venues for fans, but the areas sat unused and empty.

The show was broadcast around the world, and it filled a yawning void of live sports during what’s usually one of the busiest weeks of the international sporting calendar. The fights were initially scheduled to be aired in the U.S. on the ESPN+ subscription service, but instead were shown live on ESPN.

Another touted Brazilian also lost: light heavyweight Johnny Walker lost a one-sided decision to Ukraine’s Nikita Krylov for his second straight defeat since a nine-fight winning streak that had moved him into contention for a title shot at Jon Jones.

The UFC has not canceled any events in the wake of the pandemic, going against the plans of nearly all major sports leagues and organizations. The promotion apparenlty doesn’t plan to ban fans from its event in London next week unless compelled by regulatory officials.

The UFC is also moving its following two events, scheduled for March 28 and April 11, to its UFC Apex training complex in Las Vegas, where they will be held without fans. The events were previously scheduled for Columbus, Ohio, and for Portland, Oregon.

The Nevada State Athletic Commission held an emergency meeting Saturday and suspended any scheduled combat sports competition through March 25, when it will meet again. The commission said nothing about whether it would allow the UFC to hold its events as planned.

The UFC also still hopes to hold its next pay-per-view event in Brooklyn on April 18, and the television broadcast included constant promotion of the event. UFC 249 would be headlined by lightweight champion Khabib Nurmagomedov against Tony Ferguson in a matchup that has been booked four previous times, but canceled each time due to injuries or other circumstances.