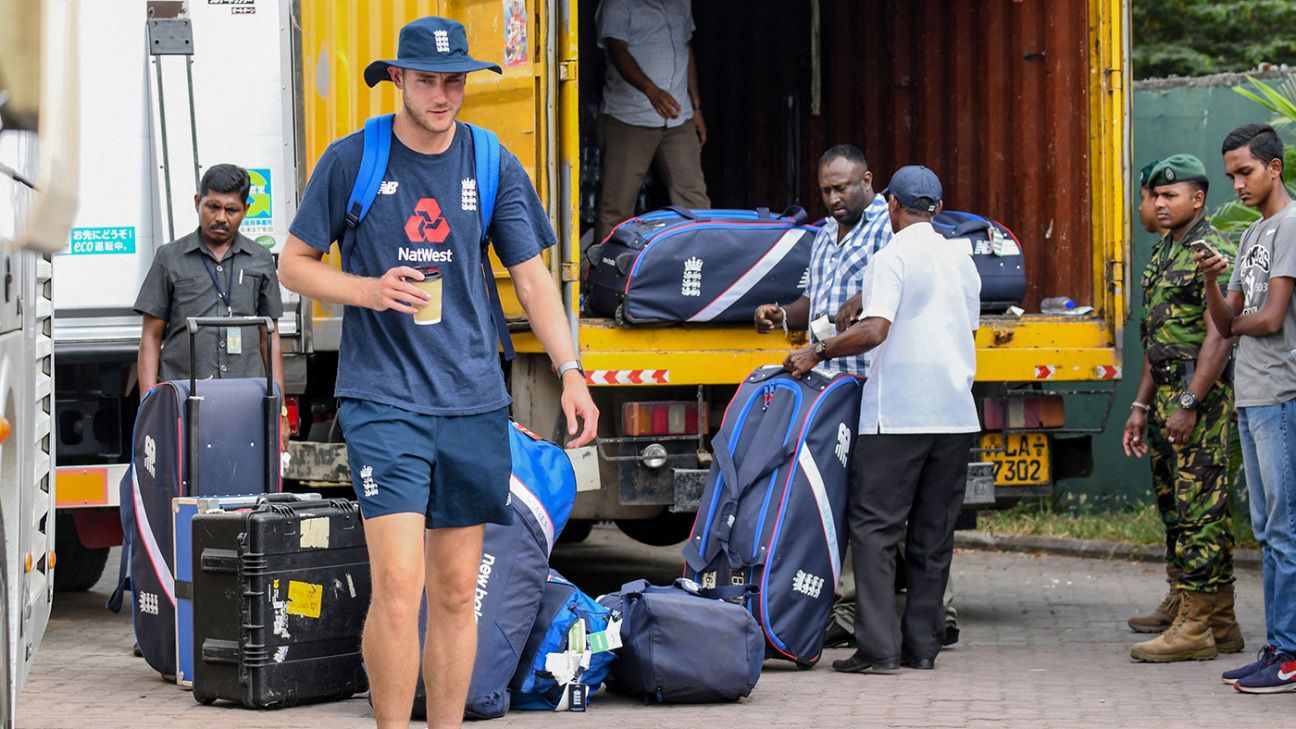 Stuart Broad has backed the “very tough, but necessary” decision made by the ECB to postpone England’s tour of Sri Lanka over fears about the COVID-19 pandemic.

The ECB announced on Friday that the two-Test series had been postponed indefinitely, stating that “the physical and mental wellbeing of our players and support teams is paramount”, and the touring party were due to fly home this weekend.

Writing in a Mail on Sunday column, Broad admitted that the players were “sad to be leaving”, but stressed that he supported the call to put the squad and the fans first.

“It was quite an eerie feeling on Friday when Joe Root addressed us as a squad to let us know that the tour of Sri Lanka was off,” Broad wrote. “Out there we felt quite a long way from the levels of worry in England.

“Obviously we had been kept up to date with what was happening back home via social media and it was quite surreal to see people fighting over loo roll in the supermarkets.

“The atmosphere has been quite different in Sri Lanka because there have not been as many cases of coronavirus, so although as a squad we have instigated social spacing, and have been very careful, we have not witnessed any of the changes in daily life that have perhaps occurred here.”

“It’s going to be very strange for a few weeks, as it affects a lot of people, but sometimes things are bigger than sports”

Broad said that there were several “what ifs” from the players’ perspective, with fears that if one member of the touring party tested positive for the illness then everyone else would have to go into self-isolation for two weeks.

“What would happen if a family member fell ill at home, and we had been in quarantine overseas? That would have meant no way of getting back to them.

“What would happen if one of our supporters got it and it then started spreading through the rest of the fans? There were an estimated 3,000 set to travel. Over the past couple of days it has almost been as if the world has started to realise how serious this really is, and started shutting down things.

“The call came from the top, whether from Tom Harrison, or Ashley Giles, or others in the hierarchy at the ECB. They made a very tough but necessary decision and credit to them for putting the players and the fans first.

“It can’t have been easy, with all the financial aspects of a tour like this, and ultimately we want to be playing cricket for England so we were sad to be leaving. Despite the disappointment, though, the right decision has been made and we all look forward to coming back and completing this series at some stage.”

As for when that is, Broad accepted that the busy nature of the Future Tours Programme seemed to leave very limited room for manoeuvre, but speculated that the planned two-Test series could be stuck onto the end of England’s tour to India in early 2021.

“Cricket schedules are already pretty densely populated with fixtures and squeezing it in somewhere will not be easy,” he wrote. “It might not be possible to return for a whole month to fit the two Tests in as we had planned at this time, but they could possibly be tagged onto the end of the tour of India in early 2021.

“Theoretically, they would need to be completed by around this time next year to count towards the final standings of the World Test Championship, the final of which is scheduled for June. Arguably, we could come back to play back-to-back matches. That would make seven huge Tests for England at the start of 2021.”

Broad wrote that he is anticipating a “very strange” few weeks in the UK, but agreed with the line used by the ECB in their statement regarding the postponement of the tour: that “decisions like this go beyond cricket”.

“Today we are flying back into a country that is quickly going to realise what life is like without sport,” he wrote.

“It’s going to be very strange for a few weeks, as it affects a lot of people, but sometimes things are bigger than sports. This is a worldwide pandemic that needs acting upon very quickly.”