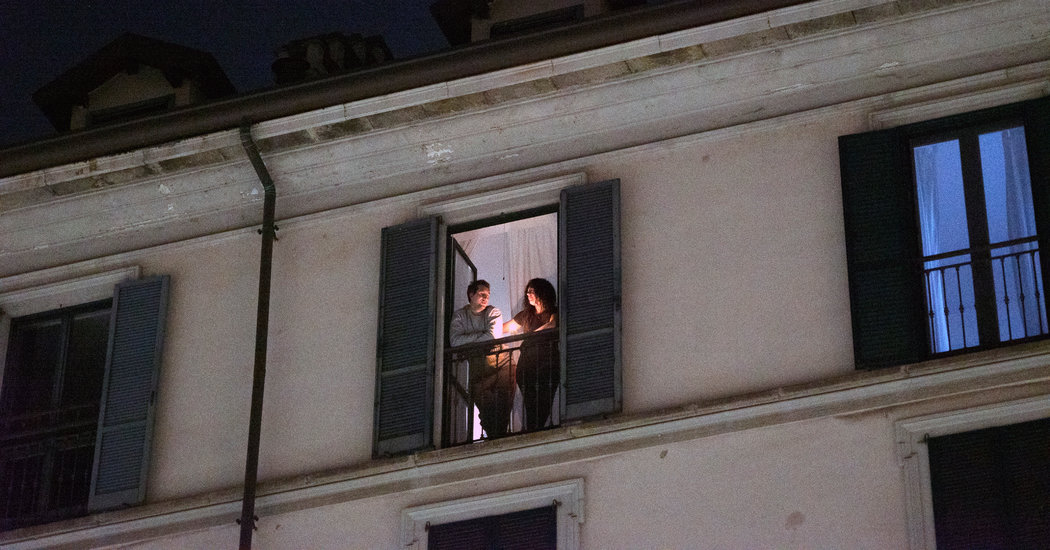 Faced with a virus that won’t slow down, the world itself moved Sunday to come to a near halt.

One after another, countries imposed extraordinary measures as they raced to contain the spread of the coronavirus. Schools were closed and restaurants shuttered. Quarantines were mandated and travel severely limited.

Austria banned gatherings of more than five people and imposed steep fines for those who disobeyed a far-reaching curfew.

And in France, after the government delivered a warning to the French to show more discipline — “We have seen too many people in cafes and restaurants,” Prime Minister Édouard Philippe said sternly on Saturday night — the message also seemed to be taking hold.

On Sunday, the cafes were abandoned.

In Spain, the streets emptied on Sunday, a day after Prime Minister Pedro Sánchez ordered all citizens to stay indoors, with exemptions only for exceptional circumstances.

“The majority of the Spanish population wants to overcome this virus as soon as possible,” Mr. Sánchez said, “so I’m convinced the majority will comply.”

Globally, there are almost 150,000 confirmed cases of infection, according to the World Health Organization. More than 5,000 people have died.

Europe, the W.H.O. said, is the new epicenter of an epidemic that began in China. On Sunday, Italian officials reported that the number of deaths there had risen to 1,809, a 25 percent increase over the day before and the largest one-day rise yet seen in any country.

Throughout Europe, the squares and stadiums were empty, the churches unpopulated. Even the Vatican was forced to abandon a long and venerated tradition, announcing that its services during the week before Easter, which usually draw tens of thousands of people, would not be open to the public next month.

The restrictions were hardly limited to Europe.

As Americans were warned that they may need to “hunker down” in the weeks ahead, South Africa declared a national state of disaster, closing schools, shutting down ports and banning gatherings of more than 100 people. South African citizens returning from some high-risk countries will be tested and face quarantines.

And China is toughening its rules for international arrivals, requiring that all people coming to Beijng from overseas spend the mandatory 14-day isolation at a quarantine site that they will be required to pay for.

In the Philippines, the densely populated capital, Manila, went under lockdown on Sunday, raising fears about the government’s intentions. The authorities sought to assure citizens that the heavy presence of security forces did not herald a return to martial law.

Elsewhere, some governments were taking a less drastic approach — drawing some criticism that they were being lackadaisical.

While large gatherings are being suspended in much of the world to reduce the speed of the coronavirus’s spread, in Mexico, the government of Andrés Manuel López Obrador has declined to follow suit, saying it does not want to act prematurely.

Last week, a Mexican health official pointed out that his country was preparing for a tourism season coinciding with Easter vacations and spring break.

“Restricting international travel to Mexico is not planned, nor is it being considered,” he said.

The government of Britain’s Prime Minister Boris Johnson, too, has come under fire for its relatively relaxed attitude to the epidemic. But on Sunday, it appeared that Britain would align itself with other countries’ approach.

Under pressure to impose tougher restrictions, the authorities said they would ask Britons over age 70 to self-isolate for up to four months. The government is also expected to ban large gatherings starting next week.

Much of the world’s focus has remained on Italy, the hardest hit country outside China. Despite stringent restrictions on movement, Italy is still reeling.

China’s highest daily toll was on Feb. 13, when the country reported 254 new deaths, according to the World Health Organization.

The cases of infected in Italy now tops 24,700, even with the entire country locked down for a week.

In the center of Madrid, the police patrolled the streets, with few cars passing along its main artery, Castellana Avenue. In Barcelona, the Gothic Quarter was empty, and private security kept anyone from entering the main cathedral.

With governments following their own playbooks — or, it sometimes appeared, improvising in the face on an assault the likes of which virtually no one alive has ever seen — the restrictions on citizens varied greatly, even when only a barrier-free border separated them.

And many people remained confused about what was still allowed.

In Spain, while bakeries and small supermarkets stayed open — deemed providers of essential food supplies — some shopkeepers were uncertain where they stood.

“Is jamón a primary need?” asked Pol Aranda, a seller of Spanish ham at a gourmet store in Barcelona. On Sunday, the police ordered him to close.

In Paris, at a bakery near Place de la Nation, several dozen customers were jammed in, oblivious to any social-distancing rules.

“We can’t live without bread here,” said Bruno Lanterne, 55, a hairdresser, as he left the bakery, two baguettes tucked under his arm. “You can’t take that away from the French.”

France announced on Saturday the closing of all nonessential businesses, including restaurants, bars and movie theaters, after a sharp uptick in infections. The number of cases there passed 5,420 on Sunday, with 127 deaths. On Saturday, 300 coronavirus patients there were in critical condition — half of them under 60 years of age.

LVMH, the French company known for luxury items like Louis Vuitton bags, said Sunday that it would start producing mass quantities of hand sanitizer and give it to the French health authorities. The company said in a statement that it would use the facilities where it produces fragrances under the Christian Dior, Givenchy and Guerlain labels.

And in the Netherlands, the government announced a lockdown that will last until April 6. Schools and child care facilities will be closed. So will restaurants, cafes, gyms and sporting clubs.

As the coronavirus has spread, it has infected not just people but whole societies, leaving them with a sense of insecurity, fear and fragmentation. Modern Europe has long prided itself on erasing borders, but now Europeans are back to building them.

They are being told to hide away and to place, in effect, borders between themselves and their fellow citizens, even as actual barriers go up between countries.

Germany will close its borders with Austria, Denmark, France, Luxembourg and Switzerland in an effort to slow the spread of the coronavirus, the country’s interior minister said on Sunday. The move follows those of several other European Union member states in restricting freedom of movement across the Continent.