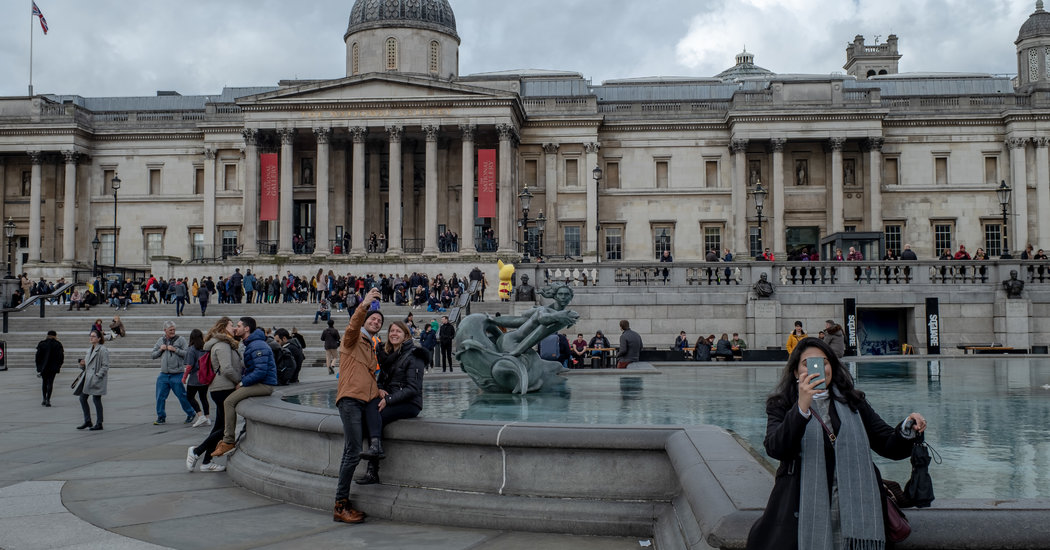 LONDON — When Prime Minister Boris Johnson last spoke to the British public about the coronavirus pandemic, four days ago, he was flanked by his chief medical and science advisers and issued a stark warning that “many more families are going to lose loved ones before their time.”

Even then, the comparatively relaxed measures Mr. Johnson announced seemed at odds with the gravity of the crisis he said was bearing down on the country. The dissonance has only deepened in the days since, as British officials have offered mixed messages about their strategy for fighting the virus and leaked details of more rigorous measures to come in a piecemeal, selective manner.

This muddled approach has left many in Britain confused, especially since France, Spain and other European countries have taken far harsher measures to shut down their countries. Britain, in the age of coronavirus, is a strangely ambivalent society: Pubs in London continued to hop on Saturday night, even as nervous shoppers crowded grocery stores on Sunday morning.

“Communications is absolutely essential to retaining the public’s trust,” said Devi Sridhar, director of the global health governance program at Edinburgh University. “It is frustrating that Westminster has been so cagey on why it is pursuing these policies and not transparent on the underlying evidence and models.”

At the heart of Britain’s problem is that it has diverged sharply from other Western countries in how it is responding to the virus: putting off school closings and the banning of public gatherings for as long as possible, so that the public will go along with such measures when the need for isolation becomes more desperate.

The approach is based on medical and behavioral science, as well as a belief that Britain’s early success in testing patients and tracking down their contacts has staved off the kind of surge in cases that would quickly overwhelm hospitals. But as infections shot up to 1,372 on Sunday, and the Trump administration imposed a travel ban on many visitors from Britain, the policy has become increasingly hard to defend.

In an open letter, nearly 350 scientists warned that the British approach was putting lives at risk. “Additional and more restrictive measures should be taken immediately, as it is already happening in other countries across the world,” said the letter, which was also signed by 33 experts outside Britain, including from Harvard and Cornell universities.

There are signs that Britain may harden its measures in the coming week. But the government’s signaling has been haphazard and opaque.

Plans to isolate people over the age of 70 in their homes for as long as four months — a radical tightening of Britain’s response — first leaked out in a blog posted Saturday by a well-connected TV reporter, Robert Peston. He called it a “wartime style” mobilization, citing a “senior government source.”

Britain’s health minister, Matt Hancock, confirmed the plan in a column in The Sunday Telegraph, a newspaper favored by Mr. Johnson’s Conservative Party. But he offered few details or a timetable, and his column was kept behind a paywall on the paper’s site for several hours before it became generally available.

Mr. Johnson has not spoken publicly about the crisis since Thursday, prompting some on Twitter to ask #WhereIsBoris. Critics are calling for a daily televised briefing, not necessarily with the prime minister himself, but perhaps with the chief science adviser, Sir Patrick Vallance, and the chief medical adviser, Chris Whitty.

The two doctors have become overnight celebrities in Britain, much as Dr. Anthony S. Fauci, director of the National Institute of Allergy and Infectious Diseases, has become the face of the response in the United States. But their efforts to explain the science of coronavirus have not always gone smoothly.

On Friday, Dr. Vallance rattled nerves when he said there was merit in building up “herd immunity” in the British population, since it would make Britain more resilient to a second wave of outbreaks, which are often characteristic of influenza epidemics.

That could involve 60 percent of Britons becoming infected, something like 40 million people. That could mean hundreds of thousands of deaths, particularly among the older Britons who make up a disproportionate percentage of Mr. Johnson’s party.

“If you suppress something very, very hard,” Dr. Vallance said to the BBC, “when you release those measures it bounces back, and it bounces back at the wrong time.”

In their letter, scientists sharply criticized Dr. Vallance’s promotion of “herd immunity” because they said it would impose an undue burden on Britain’s public health system and risk even more lives. Mr. Hancock, the heath minister, quickly clarified that encouraging mass infections was a “scientific concept,” not part of the government’s strategy for dealing with the outbreak.

The government, scientists said, also erred in describing herd immunity as part of a strategy rather than simply as a possible byproduct of the inevitable spread. They said it was not clear how quickly people might develop immunity to the virus or, crucially, for how long it would last. Huge numbers of older and more vulnerable people could die as younger people built up immunity.

“They conjured up this fantasy idea about letting the virus rip to build up herd immunity as a post-hoc explanation for their failure,” said John Ashton, a former regional director of public health for the northwest of England. “And that got hammered over a 24-hour period for it being unethical to say, ‘We’re prepared to let people die rather than try to contain the thing.’”

Epidemiologists said the strategy of delaying widespread shutdowns became more difficult to sustain once the country’s testing program fell behind the spread of the virus. That left Mr. Johnson’s scientific advisers in the dark about whether there were more localized outbreaks and how many undetected cases existed.

“There was a false sense of security that everything was being done well,” said Roy Anderson, a professor of infectious disease epidemiology at Imperial College London. “And it was — full marks to the N.H.S. and Public Health England. But it has slightly run away from them in the last week.”

Once the number of cases exploded, the timeline suddenly shrank for keeping older people inside and steering everyone else out of crowded trains and pubs, experts said. Private companies also took matters into their own hands, halting soccer matches and emptying office buildings.

Britain, Mr. Ashton said, was not testing enough people to know whether its models of the epidemic’s growth were correct. Mr. Johnson declared Thursday that the country was restricting testing to hospital cases; people experiencing milder symptoms should assume they would not be tested and stay home.

That made it difficult for Britain to crack down more strictly on the movements of people with mild cases and develop an accurate picture of its outbreak, said Martin Hibberd, a professor of infectious diseases at the London School of Hygiene and Tropical Medicine.

Britain has shown signs of increasing its testing capacity, administering roughly 5,000 tests between Friday and Saturday, an increase of several thousand from earlier daily totals. But experts said more testing was needed to determine what areas were most affected, and whether nonessential travel should be restricted.

Even as public anger at the government response mounted, scientists said there was no unanimity about the right course of action. “It’s a very difficult and uncertain science,” said Helen Ward, a professor of public health at Imperial College London.

Some said the government was right to consider the economic consequences of mass shutdowns: Broad layoffs could have terrible consequences for people’s health, too. Before older people are told to isolate themselves, people need to make plans get them food, medication and basic care.

In the absence of government guidance about avoiding crowded places or extra trips to the shops, Mr. Ashton said people would have to practice social distancing, organize to look after older people and take care of sick people at home.

The paradox of Mr. Johnson’s approach, critics said, is that in trying not to be what they called a nanny state, Britain may end up taking more authoritarian measures than if the government had acted sooner.

“There’s no trust with the government, and that’s a terrible situation to be in,” Mr. Ashton said. “They need to rebuild trust very quickly.”