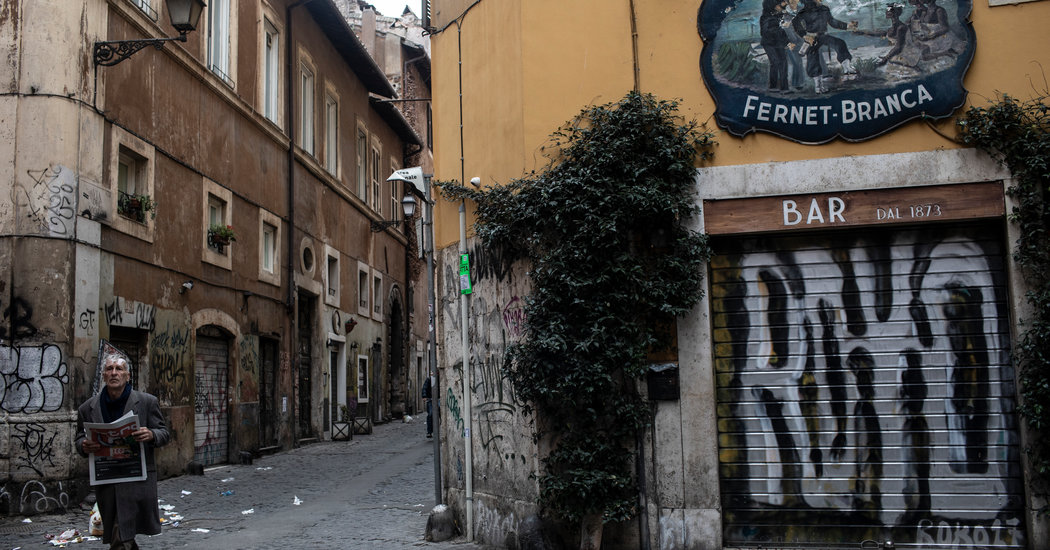 BRUSSELS — The “gilded museum” of Europe is hollow and echoing. The great squares and stadiums are empty, the museums shut, the churches hesitant about services, the fine restaurants and cool bars shuttered.

The coronavirus is not only spreading, but also infecting societies with a sense of insecurity, fear and fragmentation. Above all, it has severed humanity from its conceit of control and of the invincibility of its institutions, science, technology and democracies.

If that is true nearly everywhere the virus goes, it is all the more so in Europe, with its history of Enlightenment, where life is lived, ordinarily, on an intimate scale, bumping shoulders on the street or in the cafe, greeting friends with kisses on the cheeks.

No more. Today, Europeans are told to hide away, erecting borders between countries, inside their cities and neighborhoods, around their homes — to protect themselves from their neighbors, even from their grandchildren.

Confronting a virus that respects no borders, this modern Europe without borders is building them everywhere. But different states have different answers, and each discrete and disparate step has increased the sense of the coming apart, and the feeling that the problem is someone else’s creation.

“The paradox of a virus that knows no borders is that the solution requires borders, not just between countries but within them,” said Nathalie Tocci, an adviser to the European Union. “But putting them up in an uncoordinated way doesn’t help.”

Putting them up at all, in fact, may not make much difference. The invisible threat is already within.

Even so, there is inevitably a turn back to the state for expertise, control and reassurance. As the pandemic spreads from Italy to Spain, France, Germany and beyond, there is a growing sense of the need for harsh, even authoritarian methods, many of them taken from China.

THE LATEST Read our live global coverage of the coronavirus outbreak.

After watching the epidemic in China with extraordinary indifference, Europe has been terrified by Italy. Suddenly, many of the continent’s countries are trying to lock down, to protect themselves and their citizens. The idea of European solidarity, and of a borderless Europe where citizens are free to travel and work, seems very far away.

If the pandemic has the logic of war, requiring strong action, the enemy may be the person standing next to you.

“It’s not anymore a question of borders between states, but between individuals,” said Ivan Krastev, who directs the Center for Liberal Strategies in Sofia, Bulgaria, and is a permanent fellow at the Institute of Human Sciences in Vienna.

“It is now the individual you fear,” Mr. Krastev said. “Everyone around you may be a danger, carrying the virus. The person may not know he’s a danger to you, and the only one who isn’t a danger is the one you never meet, the one who stays at home.”

The welcoming kiss, “la bise,” is suddenly dangerous, as is the hug of happiness or condolence.

Mr. Krastev has written tellingly about Europe’s migration crisis, calling it as big a shock as the fall of Communism. But now no one is talking of opening borders, he said. “Now it’s not migrants you fear, but everyone.”

The narrative of the migrant crisis included metaphors of hordes, invasion and even insects, and claims that migrants were bringing disease. They wanted to come from their wretched lives to a Europe that they considered safe and rich. But it is no longer safe.

Now, migrants will wonder, “Is the plague worse than the war?” Mr. Krastev said. “You cannot negotiate with the plague or flee it.”

A decade ago, Dominique Moïsi, a French political scientist married to an Italian, wrote a book called “The Geopolitics of Emotion,” explaining the strains caused by globalization in terms of humiliation, hope and fear. “Today,” he said, “the dominating emotion is fear.”

“The crisis of Covid-19 is adding uncertainty to uncertainty, fear upon fear, accelerating a process of anxiety about a world that is moving too fast,” Mr. Moïsi said, referring to the disease caused by the new coronavirus.

With terrorism, economic panic, strategic uncertainty, climate change and migration, he said, “the fundamentals seem uncertain and the future unknowable.”

Now comes an enemy unseen. “You can put your hand on a door handle and get the virus — that’s the maximum of fear,” he said. He misses touching and kissing his grandchildren, he said, and begins to think of death.

Yet mobilization of society is “even more difficult and necessary because the enemy is invisible,” he said. Paris has lived through terrorism and saw 150 killed in one night in 2015, he noted. “It was brutal but visible,” he said, whereas “in the end, the number of dead from the virus will be much more numerous, but it’s invisible, and we’ve never lived through that.”

So it is difficult for governments who learned to urge calm on their populations in times of terrorism to now learn how to frighten them into acting for the common good.

During the great Black Death of the 14th century, which took so many lives, people believed that God had condemned those who died and chose whom to spare. But in a secular society “it’s harder to find the morality in who is dying,” Mr. Krastev said. “Instead you have all these conspiracy theories,” with talk of the “foreign virus” and even a Chinese spokesman suggesting that the American military was to blame.

In 2003, George Steiner, the European philosopher who died last month at 90, wrote a famous essay for the Nexus Institute called “The Idea of Europe.” But that idea is under threat.

In Europe, it is a culture of coffee houses and cafes, where people meet, read, write and plot. They are places, Mr. Steiner said, “for assignation and conspiracy, for intellectual debate and gossip, for the flâneur and the poet or metaphysician at his notebook,” open to all.

Europe’s is also a pedestrian culture, founded on squares and small streets, usually named after scholars and statesmen, famous for their works and their massacres. Europe “is walked,” he wrote, and “distances are on a human scale.”

In this plague time, with cafes closed and squares empty of residents and tourists, both of those characteristics are destroyed, leading to isolation and loneliness, Mr. Krastev said.

But perhaps most important, Mr. Steiner wrote, is the European sense of death and decay, which he called “an eschatological self-awareness which, I believe, may well be unique to European consciousness.”

Deep in Christianity and European philosophy was “a more or less tragic finality,” he wrote, adding: “It is as if Europe, unlike other civilizations, had intuited that it would one day collapse under the paradoxical weight of its achievements and the unparalleled wealth and complication of its history.”

These are hardly the end of days, but the mood is grim. Still, it is sometimes broken by surprising acts of common humanity and solidarity, Ms. Tocci noted.

An Italian, she is staying at home in Rome with her husband and children, filling out a police form when she ventures out into the street, even to go to the grocery store, and trying to concentrate on the nicer aspects of quarantine.

“You rediscover some small things, spending time with the children and the family,” keeping up with her father by Skype, noting that for once, social media is proving to be more beneficial than meretricious.

Italians have been singing together from their segregated balconies and displaying a united appreciation for their exhausted medical workers, she noted.

“What’s beautiful about it, so far, is that it hasn’t led to alienation,” Ms. Tocci said. “People are afraid but mostly showing responsibility and solidarity. There are so many messages going around, some of them full of hilarity and a shared community.”

Even on my dreary and empty Brussels street, someone has hung an Italian flag from an apartment window. And there are still, in the grocery stores, where people move silently and carefully around one another, moments of shared emotion. A woman with a full shopping cart was trying to balance a package of toilet paper and dropped her phone. I picked it up and gave it to her, then thought how foolish I had been, but she thanked me and smiled ruefully, understanding the ambivalence.

Mr. Krastev is trying to decide whether to stay in Vienna or uproot his family for a month to Bulgaria, where medical facilities are weaker but the virus seems less prevalent, and where he has a more traditional network of family and friends.

Where is the place of greater safety, a question for all refugees, he wondered. His daughter had just returned from Spain and didn’t understand why she couldn’t stay there. “But I told her, ‘The Spain you like will disappear in 48 hours.’”

Many noted “La Peste,” or “The Plague,” an allegorical novel published in 1947 by Albert Camus, seeing it as a lesson not just in how people behave in pandemics, but in how nature bursts forth to mock our pretenses.

When the bubonic plague finally lifts in his joyous city, the main character, Dr. Bernard Rieux, remembers that the illness “never dies or disappears,” but bides its time. “Perhaps the day would come,” he thinks, “when, for the misfortune and instruction of men, the plague would rouse its rats and send them to die in a happy city.”