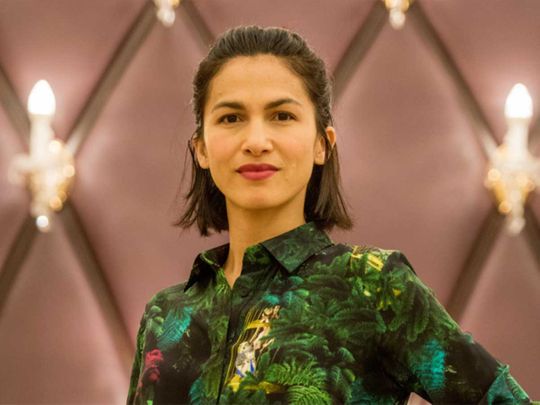 For hard-core comic book fans, Disney’s Marvel/Netflix shows represented some of the best adaptations of its smaller but equally, if not more, hard-hitting stories and characters. Leading the charge on Netflix was ‘Daredevil’ and in its second season, we met one of its most intriguing anti-heroes, Elektra Natchios, played by French actress Elodie Yung.

On-screen, Yung’s Elektra is defiant, power hungry, rebellious — almost “sociopathic”, as the actress puts it. From Yung’s earliest roles like her 2004 French debut film ‘Les fils du vent’ (‘The Sons of the Wind’) and 2009’s ‘District 13: Ultimatum’, to her later Hollywood films such as ‘The Hitman’s Bodyguard’ (featuring Ryan Reynolds and Samuel L Jackson, the 39-year-old has always played tough, no-nonsense characters — not least because she’s an accomplished martial arts practitioner, having started of with karate at the age of nine.

All of this changes with her upcoming Disney Plus film, ‘Secret Society of Second Born Royals’, to be released in November this year, where she plays a mother to a 14-year-old girl.

Gulf News tabloid sat down with Yung at the Middle East Film and Comic Con last weekend to talk about ‘Secret Society’ and also look back on the character that brought her international success. Excerpts follow:

So let’s go back to the very beginning of ‘Daredevil’. Did you have to audition for the role? How did that process go?

Yes, it was an audition. It was like a multiple rounds of auditions, actually. And if I remember, I didn’t know at the beginning what I was auditioning for. It was like a blind audition. They sent like two scenes, and they were very well written. And I was like, ‘Oh, I’m excited by that’. So that’s how it started. And then I ended up with Charlie Cox [actor who played Daredevil] to do the test with him. And that was it.

At that point, had you heard of or were you watching any of the Marvel shows on Netflix? Because you were auditioning for season two of ‘Daredevil’.

Just ‘Daredevil’, randomly because a friend of mine was like, ‘Oh you should check this out’. Because I’m not really into superhero, you know, series or movies. So, yeah, that’s what I was watching, actually. Lucky!

What about your character Elektra appealed to you?

Well, the showrunners, they described her as this sociopath. That was very appealing to me. And then I did my research and checked out the comic books. And it just happened to be like this crazy, interesting, multifaceted character. So I was very excited by that.

Did you ever end up watching the 2005 movie, ‘Elektra’, as part of your research? Jennifer Garner played Elektra in that movie.

No, no, no. I never watched it. I should now. I really should. At the time, I didn’t want to because, you know, when you are on the project, just when you do your own research, I wanted to go only to the comics. Be a purist [laughs]!

You worked very closely with Charlie Cox, both on ‘Daredevil’ and then ‘Defenders’. What was it like working with him?

He’s amazing. … And you often hear that. Like I always think, ‘Are you lying when you say your partner is so generous?’ But Charlie is a wonderful human being. And we’re not close friends. But every time we’re on set, it was just like pure chemistry. And it started like this [snaps fingers] from the test [audition] and we always had this thing. So I was always very excited to work with him.

Last year, Marvel pulled the plug on most of the shows. How did the cast and you react to that? Did you end up talking to all of them after that?

Yeah, I was in touch. You know, it’s the end of a chapter. Who knows? You know, what’s gonna come next? I think we were all very grateful to have been part of this adventure. So, yeah, we’re a bit sad, of course. But also, you know, content and grateful that we’ve done that already. And, you know, that’s also just good in itself.

Now that Disney has its own streaming platform, do you think Elektra could come back in some form?

I have no idea. I would love to because I think she’s such an interesting female character. And now everyone’s always talking about strong female characters. I think she’s also someone who’s just out of the norm and broken and very complex. So it’ll be very interesting to see that character develop again. I’ve been very lucky to have so much to play with and to see her evolve. I’ve been finding different parts of myself every time as she was evolving. It was such a great journey.

It was also a very physical role. And in previous interviews, you’ve talked about your stunt double in such glowing terms. But how much did you have to prepare for this role?

I had to do everything, basically. And it’s so funny because when we did ‘Daredevil’, they thought I was a ninja. So we didn’t rehearse. And it was like these guys don’t know what they’re doing. They got lucky that I’m a black belt in karate. I’ve always done like a lot of martial arts and trained for different projects. So they were lucky. But when ‘Defenders’ arrived, I was like, ‘Okay guys, you’re telling me I’m going to be doing twice as much [action] as I’ve done in ‘Daredevil’. We need to train.’ So then I had a proper training like I would have had on a movie set, like a month before. And, yes, Lauren Mary Kim, my stunt double. She’s the best. And she would do all the crazy kicks and the wiring work and stuff like that. But I would still have to go through all the choreography. So yeah, I trained a lot.

We’re going to see you next in a Disney Plus movie. It’s called, ‘Secret Society of Second Born Royals’.

Yes. You said it right! Please don’t ask me to say the name again. [Laughs.] So I play the queen of this imaginary land where my daughter is the princess and she is kind of a rebel and she doesn’t want a monarchy anymore. She thinks it’s not democratic. And I’m like, ‘okay, okay’. And I send her to a camp because she’s a bit of a rebel. But if it happens that she is a superhero and we have a purpose here, which is protect our people and our land. So it’s about the conflict that, you know, teenagers can have with their parents at some point. And it’s a really fun world.

That sounds like a departure for you from your other roles.

Yes, very much. It’s funny how things happen in life. Like I became a mother in the last two years. But my baby is of 19 months and I’ve just been given on-screen like a 14-year-old. So, I’ve learnt that, you know, in the teenage years of my daughter, they’re all gonna be potentially a bit hard. So I’m prepared now.