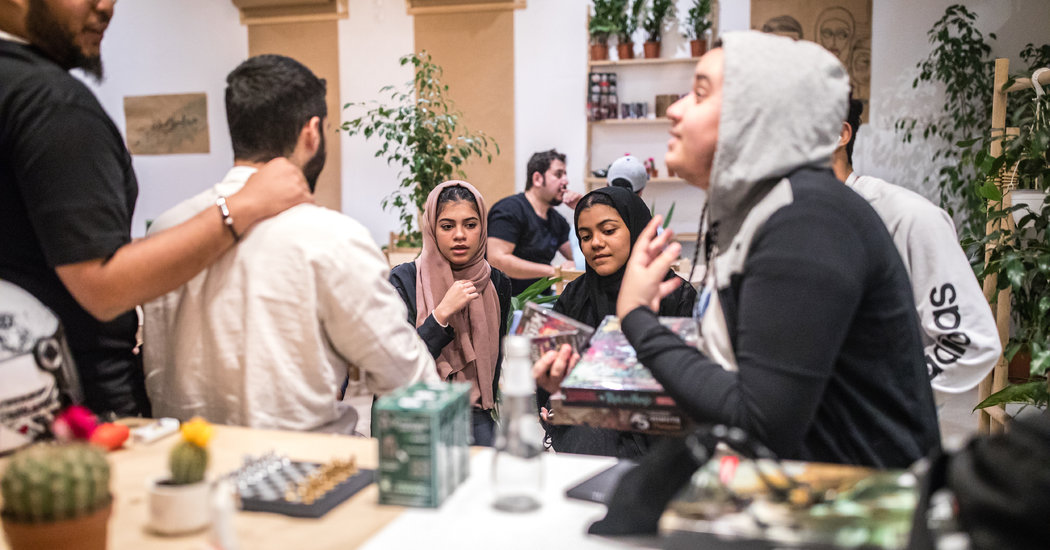 MEDINA, Saudi Arabia — On the question of women working, the law of the land was crystal clear. Raghda and Rafaa Abuazzah’s parents had ruled otherwise.

“What will people say? You’ll be in public!” their father said after the sisters scandalized their parents by announcing that they wanted jobs at a coffee shop in Medina, the second-holiest city in Islam, where the Prophet Muhammad was said to have been born. “It’s fine to work in an office because no one can see you there. But how can you work with men?”

Two years and much ado later, Raghda serves lattes filigreed with milk art at a strip-mall coffee shop and Rafaa hosts community gatherings at an event space across the way. Their co-workers and customers include men and women. Though their hair remains covered, their faces are bare. And their parents, to everyone’s surprise, are coming around. Kind of.

“My parents are against me working here. But it’s so good to finally be myself,” said Raghda, 21. “Now, I’m free. I can finally talk to people without covering my face.”

For Westerners, squinting at Saudi Arabia across a vast landscape of stories about oppressed women, ultraconservative Islam and human rights abuses, the desert kingdom often leaves a single, damning impression: Here is a country that women are desperate to flee.

But the changes driven by Crown Prince Mohammed bin Salman, the kingdom’s de facto ruler, have complicated that image over the last few years, codifying for women the right to drive, attend sporting events and travel without a man’s permission, among others. As the social codes that long governed their lives relax their grip, more women are wearing their hair uncovered and mingling openly with men — at least in larger cities.

But whether reality lives up to the law depends on the dice roll of birth. Day by day, it still falls to women in many households to negotiate their freedoms with the fathers, husbands, brothers and sons who serve as their legal guardians.

Even before the legal changes, Saudi women from tolerant families rarely had to chafe under requirements that a male guardian approve plans to get jobs or travel abroad. For them, permission was nearly always granted.

Though Prince Mohammed has spoken of dismantling the guardianship system, women remain legal minors when it comes to marrying, living on their own and other matters. Those from more traditional families are still yoked to male guardians for whom fear of God, change or what the neighbors will think often outweighs the letter of the law.

For a long time, Raghda and Rafaa seemed fated to retrace the path of their five older sisters: arranged marriages while still young; children soon thereafter; faces covered with the niqab, the black veil that reveals only the eyes. The sisters who worked did so in the seclusion of offices, segregated from male co-workers.

The younger siblings were not looking forward to it.

“Me and Raghda were so depressed,” said Rafaa, who is younger but more forceful. “We thought: We can’t do anything. We don’t have choices. This isn’t the life we want to live.”

Compared with girls they had seen in Jeddah, the Saudi port city where looser social customs allowed women to go unveiled, wear their all-covering robes open over jeans and mingle with men in public, the sisters felt anonymous, forgettable.

“We had no self-esteem,” Raghda said, “because we all looked the same.”

Triumphs that might seem trivial outside the kingdom loom huge within it, especially in the small cities and villages where most Saudis live, far from cosmopolitan Riyadh and Jeddah.

Female baristas were nonexistent in Medina when the sisters first got hired at a coffee shop whose owner had decided to brave it. Skittish about their uncovered faces and flustered about their friendly interactions with boys, he fired them soon after.

By then, however, other cafes had opened with both male and female staff. Raghda and Rafaa found new jobs, Raghda at Dasoqa, a coffee shop whose name means “ladybug,” and Rafaa at Blink, a community gathering space nearby.

Their parents have caved a little, but fretted a lot. They feared for the family’s reputation as much as for their daughters’ souls.

“Our dad says, ‘What if my family came and saw you here working, making coffee and drinks?’” said Raghda. “‘They’ll see your face!’”

To the sisters, that was the point. Raghda’s hair remains neatly tucked under a lilac head scarf, Rafaa’s under a black one. But their faces — sometimes people still do a double-take when they see them — are bare.

“My face is my identity,” said Rafaa.

It was not only their parents who objected. When they waited for Ubers after work, the young men hanging around the mall often heckled them, suspicious of their uncovered faces and light makeup.

“What are you doing with those guys?” they demanded as the sisters chatted with male friends.

The lack of reliable public polling and free speech makes it difficult to gauge how Saudis view women’s changing status. But one study, from 2018, suggested that fear of social stigma may drive opposition more than personal resistance.

It found that a majority of Saudi husbands approve of their wives working outside the home, yet underestimate how many other men also support it. Telling them that more men actually favored it was enough encouragement for them to register their wives for a job-recruitment service.

The problem is persuading individual legal guardians that attitudes are changing.

By December, Raghda and Rafaa had turned to their next project: persuading their father to let them go to an electronic music festival in Riyadh, a 90-minute flight away, with a group of friends, male and female.

Rafaa told him they were going to “a festival,” omitting the part about the music. But he had already read all about it.

As she spoke, her phone buzzed. She held it up, wide-eyed. “Yes,” his text message read. “You can go.”

Their parents’ easing up has mirrored a general loosening of Saudi society, much of it owing to the legal changes set in motion by the crown prince, who has erased many social restrictions and defanged the once-feared religious police.

Though Crown Prince Mohammed remains a volatile and internationally controversial ruler — this month, he delivered back-to-back surprises by detaining at least four royal relatives and rocking global markets with a sudden oil price war — he appears committed to his social agenda.

Not all the changes have been hard sells in Saudi Arabia.

Many Saudis, having traveled and lived abroad or seen the world through the internet, were already ready for a more permissive way of life. Others, like Rafaa and Raghda, were pushing for it from below.

“I think it’s a huge wave that our parents can’t stand in front of,” Rafaa said. “Even if they wanted to, they can’t.”

In Riyadh, the capital, it was not only respectability but religion that troubled Revan Moha’s parents. Ms. Moha, a baby-faced 18-year-old with round, wire-rimmed glasses and close-cropped hair, had not dared tell her father that she had a job, let alone that she worked at a coffee shop where clientele and baristas mixed freely, male and female.

“Here in Saudi Arabia, it’s always, ‘What are people going to say?’” she said. “I really don’t care what people say, but my parents do.”

For all the government reforms, she said, “If your family is traditional, it wouldn’t help at all.”

The gulf between strict and tolerant families can be vast. Women whose families raise no objections, like Joumana Alshaikh, 20, Ms. Moha’s co-worker and friend, often assert that the crown prince has granted women all the rights they need.

When she lived for a time with her strict, pious father after her parents’ divorce, cutting her hair short was forbidden. So were talking to boys and outings with friends. So was playing music, as she dreamed of doing, or even listening to it.

She coped with an old iPod, a phone and a keyboard hidden in her room. When she heard her father coming home, her fingers flew to silence the music and close the social media apps where she chatted with male friends. After her father confiscated her phone, she would message friends from her laptop, wheedling them into ordering her Ubers so she could sneak out.

Ms. Alshaikh, who never had to sneak around her parents, sees the place of women differently.

“The new thing is, women have more rights than men,” she said. “Men do things for women. He does whatever you want. You’re the princess of the house.”

“What are you talking about?” Ms. Moha sputtered. Things might be changing but she could not think of a single arena in which Saudi women’s rights outstripped men’s.

Her father eventually gave up and sent her to live with her mother, under whose more permissive roof Ms. Moha cut her hair, uncovered her head, started wearing her abaya open over jeans and T-shirts and bought a piano and an electric guitar.

She has even told her mother that she has a job. Revealing where she works, though, will have to wait.