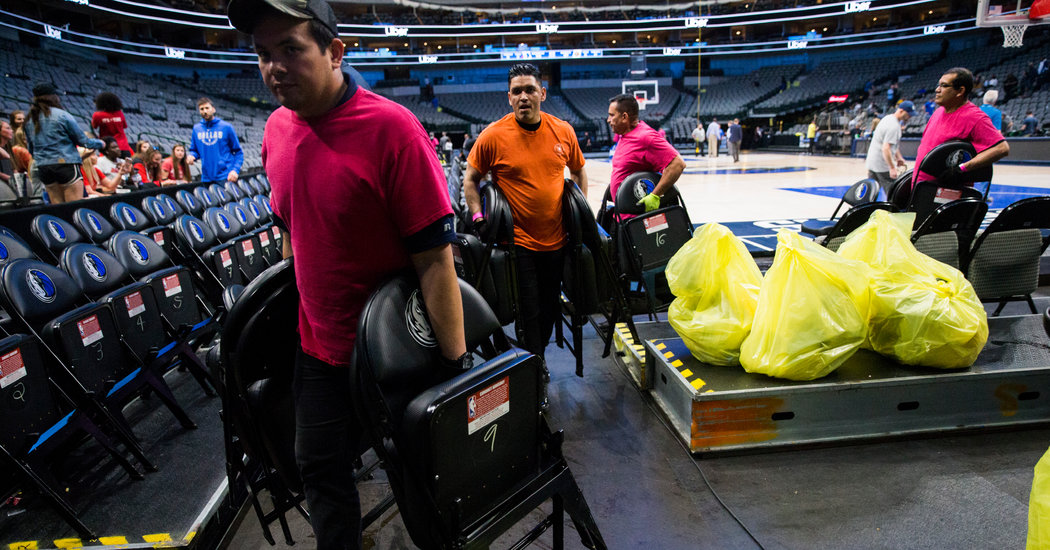 Some of the N.B.A.’s biggest stars — including Zion Williamson and Giannis Antetokounmpo — and several team owners said they would help cover the lost income of everyday arena employees while the league goes dark for at least 30 days because of the coronavirus outbreak.

The announcements have come in fits and starts as the 30-team league grapples with the abrupt pause of its season, and have turned a critical spotlight on the disparate circumstances of the billionaire team owners and the hourly workers they depend on to host games.

“N.B.A. teams, arena owners and players are working together in partnership to support arena employees impacted by our season hiatus,” N.B.A. spokesman Mike Bass said in a statement. “Within the last day, many have already announced their plans while others are in the process of formulating them.”

As of Friday night, roughly half of N.B.A. teams had announced or said they were finalizing plans to reimburse workers for lost wages. The employees range from ushers, concession vendors and ticket-takers who work for the arenas, to part-time employees like game-night performers.

Williamson, the Pelicans’ star rookie, said in an Instagram post on Friday that he would cover the salaries of the workers at the team’s home arena in New Orleans, the Smoothie King Center, for the next 30 days.

“These are the folks who make our games possible, creating the perfect environment for our fans and everyone involved in the organization,” Williamson said, adding, “This is a small way for me to express my support and appreciation for these wonderful people who have been so great to me and my teammates.”

A Pelicans spokesman said that team employees would continue to receive full pay.

Antetokounmpo, the star of the Bucks, announced on Friday that he would donate $100,000 to the staff at the Fiserv Forum, the team’s home arena in Milwaukee. Soon after, the Bucks said they would match his contribution.

Mark Cuban, the owner of the Dallas Mavericks, was one of the first N.B.A. owners to say that part-time workers would be taken care of in some way. In a phone interview on Friday, Cuban said that all affected arena employees would be paid as if the Mavericks games were being played. Cuban owns half of the American Airlines Center, where the Mavericks play. He said that for him, there was no issue with any red tape, but for owners, there could be tax considerations.

Exactly how to take care of affected workers is often not as simple as the team’s owners writing a check. The process is complicated by whether the team owns and operates the arenas it plays in, creating uncertainty about how teams who want to pay those employees should go about it.

In Philadelphia, the home arena for the 76ers is owned by Comcast Spectacor. A spokesman for the team said on Friday that team employees would be compensated for the missed time; separately, Comcast Spectacor said that arena employees would be paid through March. In Sacramento, the Kings co-own the Golden 1 Center with the city and said earlier in the week that its part-timers would be fully compensated through March.

Not all owners have the same financial considerations. Ted Leonsis, who owns the Washington Wizards, also owns the Washington Capitals of the N.H.L., and the Washington Mystics of the W.N.B.A., among other teams. In March, the Capital One Arena, which is owned by Leonsis, was slated to have about 500 part-time employees to service 16 events, between games played by various teams and concerts. A spokeswoman said the Wizards would continue to pay the part-time employees as if they had worked those events through the end of March. The schedules for these workers had not been set beyond this month.

Some teams, like the Atlanta Hawks and Cleveland Cavaliers, do not own their arenas but operate them. Both the Hawks and Cavaliers announced plans to pay part-time employees even if games weren’t going on.

Like Williamson and Antetokounmpo, some other N.B.A. players pledged to cover costs. Kevin Love of the Cavaliers was the first to announce that he intended to chip in $100,000. Blake Griffin, the forward for the Detroit Pistons, signaled his intent to donate $100,000 on Friday. The Pistons had already announced their plan to pay part-timers for their lost work, but they do not own their home, Little Caesars Arena.

“While we cannot speak directly for other companies that employ staff in the arena, we are hopeful of reaching accommodation protecting them as well,” a team statement said.

On Friday evening, the Golden State Warriors announced that their players, coaches and owners would donate $1 million to a disaster relief fund set up for arena workers by the franchise’s community foundation. The team said it employs more than 1,000 part-time workers for each game.

Some other teams, like the Houston Rockets, said that they were working on plans but had not finalized them yet. Dianna Boyce, a vice president with the Indiana Pacers, said in an email that the franchise was “doing what we can to lessen the impact on our employees,” but was not more specific.

There is also the matter of concessions staffers — employees who sell food and beverages for various chains at the arenas. Their fate remains unclear. They are often managed separately from the arena and the teams. Representatives for Aramark, the food and beverage company that, according to its website, services dozens of professional teams across multiple leagues, did not respond to a request for comment.

After Spencer Dinwiddie, the Nets guard, posted a tweet on Thursday, saying, “Gotta take care of the non salary arena staff etc,” Nets owner Joe Tsai responded, “Hear hear,” and added that the Nets were working on a plan.