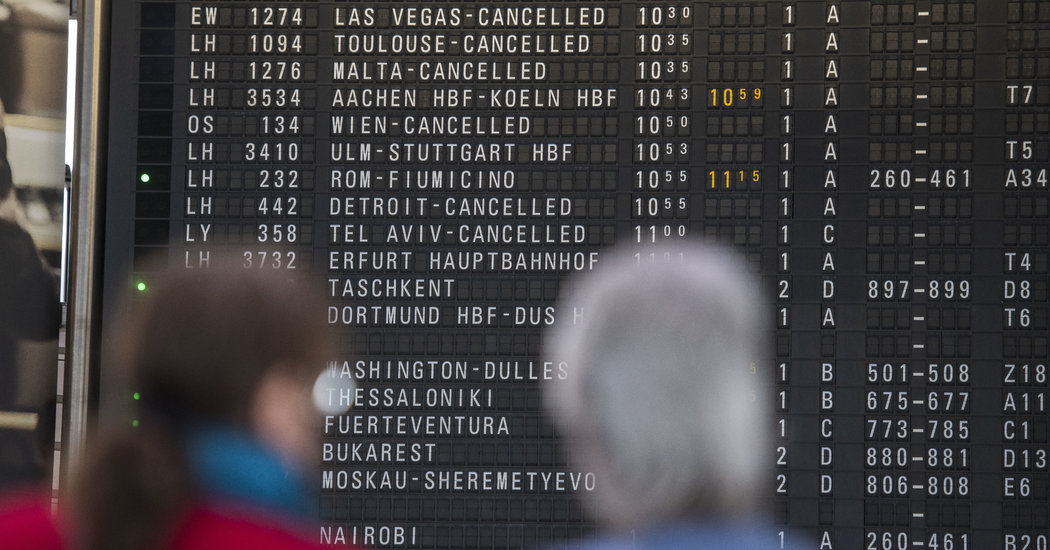 Markets on both sides of the Atlantic had their worst day in decades on Thursday, ahead of an American ban on most travel from Europe that takes effect tonight and despite the U.S. Federal Reserve’s $1.5 trillion offer to banks.

The prospect of the 30-day ban is already sowing chaos across the Continent and hammering the airline industry.

European leaders, whose own cohesion is under strain, said it had been issued “unilaterally and without consultation.”

And in the U.S., our White House correspondents write, a president who presents himself as the nation’s commanding figure has failed to offer clear guidance to the local officials who are busy shutting down much of American life.

Here are the latest updates on the virus and the markets, maps of where the pandemic has spread and a primer on the travel ban.

What to know: The Times is providing free access to our most important updates and guidance on the outbreak. And our Coronavirus Briefing, like all our newsletters, remains free.

Who should live or die? Doctors in the Lombardy region of northern Italy are confronting that excruciating question as the coronavirus outbreak overwhelms a wealthy and sophisticated health care system.

The struggles in Lombardy, the European region hardest hit by the pandemic, are a terrifying glimpse of what other countries may soon face — and a reminder that decisive action is needed before case numbers even appear to reach crisis levels.

Quotable: “The outbreak has put hospitals under a stress that has no precedents since the Second World War,” said Massimo Galli, the director of infectious diseases at Sacco University hospital in Milan, the capital of Lombardy. “If the tide continues to rise, attempts to build dams to retain it will become increasingly difficult.”

By the numbers: Italy has more than 15,000 infections and at least 1,000 deaths. Both figures are the highest in Europe by far.

Looking ahead: Experts say that if northern Italy’s health care system cannot bear the brunt of the outbreak, it’s highly unlikely that the poorer south would fare any better if the virus spreads there.

The W.H.O. has a plan. Countries aren’t listening.

The World Health Organization has served as a central coordinating body for outbreaks since the aftermath of the 2002-2003 SARS coronavirus epidemic.

But as the new coronavirus spreads, dozens of countries — the W.H.O. won’t say which — are flouting its legally binding reporting requirements. In that sense, our investigative reporter in London writes, the agency’s recent declaration of a pandemic reflects its underlying weaknesses.

“W.H.O. is at the mercy of its member states,” said Ashish Jha, a director of Harvard Global Health Institute. “Countries don’t have to listen.”

If you have some time, this is worth it

Now for some good news: The Times Magazine’s annual music issue is here. The featured artists include Lil Nas X, above, whose song “Old Town Road” — with a twangy rap beat that he bought from a Dutch stranger on the Internet — has become a cultural phenomenon.

The music in this collection ranges from the overwhelmingly popular to the fairly obscure. Listen for yourself.

Airstrikes: U.S. warplanes struck targets in southern Iraq on Thursday, officials said, hitting back at an Iraqi militia with ties to Iran that is believed to have been part of a rocket attack a day earlier that killed three servicemembers, two American and one British.

Snapshot: Above, Almere Oosterwold, a Dutch community that encourages residents to design their own houses. We covered it as part of our latest Design special report.

What we’re reading: This New Yorker essay by Colin Jost, a head writer for “Saturday Night Live,” about his taxing high school commute between the New York City boroughs of Manhattan and Staten Island. Lara Takenaga, a staff editor, called it “an earnest look at how his teenage years helped shape his future career.”

Cook: Huevos rotos — a one-pan meal “good with a cup of coffee or a beer” — and these other weekend breakfasts.

Read: “Young Heroes of the Soviet Union,” by Alex Halberstadt, is a moving and often funny memoir about the author’s family and its history.

Smarter Living: There is way too much misinformation out there about boosting your immune system. Here’s what actually works, and what doesn’t.

How did jurors decide on the conviction of Harvey Weinstein, who was sentenced on Wednesday to 23 years in prison? Our Metro desk wanted to answer this critical question. Emily Palmer, a regular Times contributor, explains how our reporters did it.

The goal was to get in touch with the jurors to reconstruct their mind-set during deliberations.

In Mr. Weinstein’s case, few jurors initially spoke to reporters. After the verdict, my role was to gather color, or descriptions of the scene, from the courthouse and to contact and interview jurors at their homes.

I went to the East Village neighborhood in Manhattan. For 12 hours, I knocked on the doors of three jurors, left notes with door attendants, ate at least one bag of salt and vinegar potato chips and waited in the lobby of another juror’s building — to no effect.

Another reporter, Nicole Hong, reached one juror by text. He wanted a few days to process the trial.

Laura Dimon, who worked as a stringer, a type of freelance reporter, spent five days trying to reach one juror. She went to three possible addresses for the person in Manhattan, left one handwritten message and sent three emails. Then, while walking her dog, she received a call from an unknown number. It was the juror, ready to talk.

Our reporters eventually reached three jurors who agreed to speak anonymously about what had happened in the closed jury room. Those interviews offered a revealing look at the deliberations and showed a jury that took its responsibility seriously.

“They largely had a civil discussion,” said Jan Ransom, a Metro reporter who covered the trial daily. “They were able to put away what one called ‘the noise’ of the ‘movement’ outside the courtroom to focus on the evidence from each woman and what they believed really happened.”

That’s it for this briefing. Have a good (and safe) weekend.

P.S.
• We’re listening to “The Daily.” Our latest episode is about the global response to the coronavirus outbreak.
• Here’s today’s Mini Crossword puzzle, and a clue: Bit of a dying fire (five letters). You can find all our puzzles here.
• Print readers of The New York Times Magazine will be able to use Google Lens, a visual search tool, to find additional content by pointing their smartphone camera at the magazine cover and throughout the pages of the print magazine.