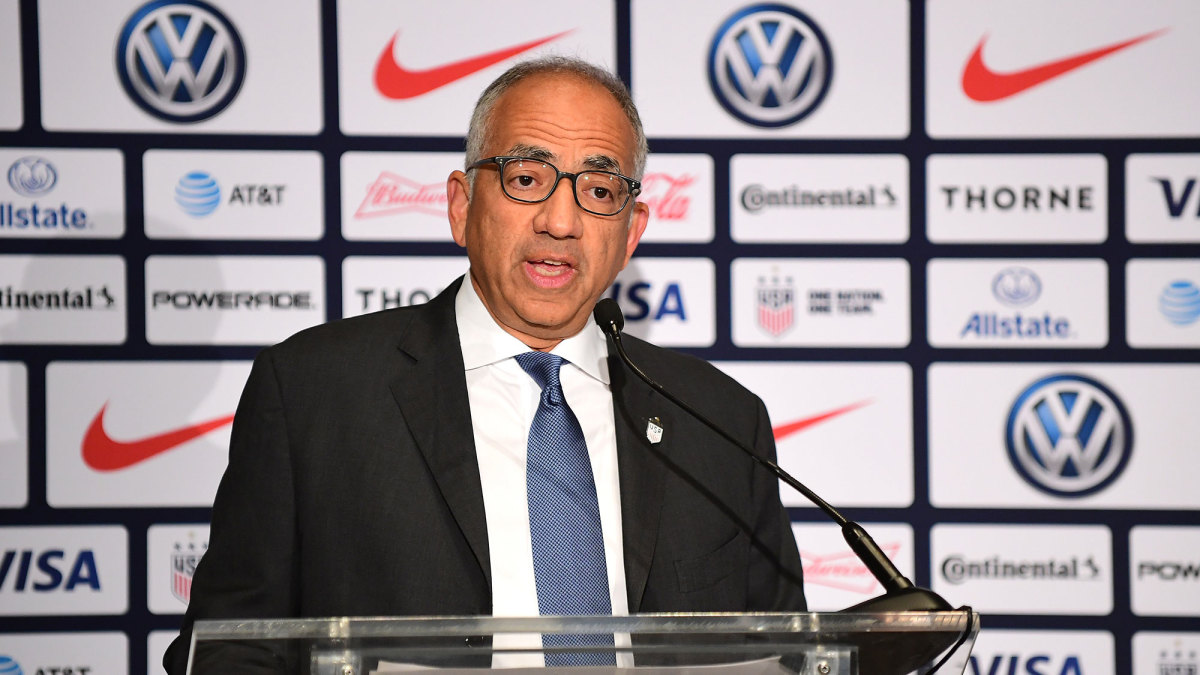 Major changes at U.S. Soccer have altered the likely trajectory of the U.S. women’s national team’s pay equity lawsuit. Simply put, the prospect of the two sides reaching a settlement and averting what would be a historic trial have increased.

U.S. Soccer’s leadership, and the lead attorneys defending the Chicago-based not-for-profit, are different today than they were at the start of the week. While this has been a tumultuous week for the American sports industry and for the country as a whole due to the outbreak of the coronavirus disease, U.S. Soccer has experienced an additional type of crisis.

On Monday, U.S. Soccer, through its attorneys from the law firm Seyfarth Shaw, filed a series of legal documents in Los Angeles federal court. The documents were submitted to Judge Gary Klausner, who is presiding over the players’ class action. Among them was a memorandum of points and authorities. The memorandum attempts to debunk the players’ claim that U.S. Soccer has violated the Equal Pay Act and Title VII of the Civil Rights Act of 1964. Both of those laws make it illegal for employers to discriminate employees’ pay on the basis of gender, among other demographic characteristics. The content of some of U.S. Soccer’s arguments was essentially discriminatory and misogynistic against the very same players the federation is claiming is treated fairly, and therein lies the impetus for a week that included sponsor, player and public backlash and president Carlos Cordeiro’s abrupt resignation Thursday night.

Here’s a closer look at how all of it may change the calculus as it relates to the gender discrimination lawsuit:

A legal defense that has caused offense

U.S. Soccer’s legal defense features several components. One is not especially controversial and, in fact, is fairly persuasive. The players have a union that negotiated the terms of pay that the women contend are unlawfully low when compared to U.S. Soccer’s pay to the men. Basically, U.S. Soccer argues that the women should blame their own union for negotiating terms through 2021 that they now regret. This type of defense isn’t about one’s gender or whether he or she excels at soccer or whether he or she generates revenue. Instead, it simply highlights that the women’s players negotiated their pay. If they don’t like it, U.S. Soccer maintains they should blame their union, not management.

U.S. Soccer’s other legal defenses are quite different. Some of them seem gender insensitive and rely on disputed assertions. U.S. Soccer’s memorandum tries to claim that the women occupy inferior jobs—and thus inequivalent occupations for purposes of wage comparison—to those held by the men. The memorandum asserts that the men compete in more tournaments that are watched by more people worldwide. It also depicts the men as playing in more hostile road environments and as having more responsibilities in their jobs. The memorandum further contends that “indisputable science” makes clear that the men rely on more speed and strength than the women.

The memorandum is aimed at achieving litigation goals for U.S. Soccer—namely, to undermine the women’s legal claims. The memorandum is accessible to the public, for a fee, through the electronic public access service PACER. However, the public is not the intended readership. There is one main intended reader, and his name is Judge Klausner. In theory, it shouldn’t matter if the memorandum offends segments of the public and media; what matters (again, in theory) is whether it persuades Judge Klausner as to its legal analysis. Attorneys are in the business of advocating for clients. They aren’t politicians or entertainers whose success depends in part on favorable public opinion.

Theory and reality are different creatures. In reality, U.S. Soccer was institutionally damaged by the memorandum. The memorandum advocated viewpoints that sparked intense outrage from various sectors of the soccer community.

Megan Rapinoe, who along with teammates Alex Morgan, Becky Sauerbrunn and Carli Lloyd serves as a class action representative, repudiated the memorandum as full of “blatant misogyny and sexism.” MLS commissioner Don Garber, who is on U.S. Soccer’s board of directors, opined that the memorandum is “offensive” and “unacceptable.”

The industry impact of the memorandum escalated when U.S. Soccer’s major sponsors—companies that pay U.S. Soccer millions of dollars a year for the right to be associated with it—denounced the memorandum. To wit, a spokesperson for Volkswagen said the automaker was “disgusted” while a spokesperson for Coca-Cola called it “unacceptable and offensive.”

This very public reaction by sponsors sent a powerful message, suggesting that they might attempt to walk away from their contractual arrangements barring any significant changes.

Keep in mind, sponsorship contracts almost always contain “morals clauses.” These clauses say, in so many words, that if the sponsored company (or athlete) engaged in conduct that offends the community or damaged its brand, the sponsor can exit the contract and extinguish its remaining obligations to pay. The threat of sponsors invoking moral clauses would mean a threat to U.S. Soccer that it could lose millions of dollars in projected revenues.

First, Cordeiro, still the U.S. Soccer president at the time, announced that the law firm Latham & Watkins would “join” the legal team. Cordeiro said the move reflected a need for U.S. Soccer’s legal arguments to exhibit “the utmost respect not only for our women’s national team players but for all female athletes around the world.”

Second, Cordeiro abruptly stepped down as president, and U.S. Soccer vice president Cindy Parlow Cone was elevated to president. Cone, a former U.S. women’s national team player, will remain as president at least until there is an election next February, at which point U.S. Soccer will decide who finishes the final year of Cordeiro’s four-year term.

These moves set the table for U.S. Soccer to reach a settlement with the women before their trial is set to begin on May 5.

First, assuming that Latham & Watkins now leads U.S. Soccer’s legal strategy, the law firm will bring a fresh perspective to the case and won’t be burdened by the baggage of controversial statements made in prior court filings and in failed mediation sessions. Any bad blood between the lead attorneys for both sides should be a thing of the past.

Second, Latham & Watkins attorneys know that U.S. Soccer wants a resolution to the litigation that doesn’t necessitate the drafting of legal arguments that will outrage the public. To argue that women players are inferior to men players strikes many as both sexist and objectively false. Both sets of players compete at the highest level. The most glaring difference between them reflects merit and achievement. The women have been dramatically more successful, given that they haven’t lost a match in 14 months and have won four of the eight FIFA Women’s World Cup championships. By contract, the men have never appeared in a FIFA World Cup final and have been looking to win back American soccer fans after failing to qualify for the 2018 World Cup.

Third, U.S. Soccer presumably wants closure. It has heard from its sponsors. If those sponsors dropped U.S. Soccer, then the federation might lose more money than it would have to spend by paying higher wages to the women. Along those lines, U.S. Soccer likely realizes that its brand is tarnished when it or its attorneys advocate offensive positions about women’s players.

Fourth, this changing dynamic will impact U.S. Soccer’s legal strategy and push it toward prioritizing a settlement. If U.S. Soccer directs its attorneys to avoid raising any legal arguments that could offend the public—even if those same arguments might persuade Judge Klausner—those attorneys are playing with a much smaller playbook. This could make it harder for the attorneys to win at trial. Fear of losing would bother U.S. Soccer’s attorneys, particularly since the trial would be a defining case in their careers. They also know that some of the public will identify them as villains for arguing in court against the women’s players. A pretrial settlement would thus make sense from the standpoint of U.S. Soccer’s attorneys.

None of these developments is happening in a vacuum. If U.S. Soccer agrees to pay the women’s players higher wages, then the men’s players could then demand higher wages, too. The CBA between the men and U.S. Soccer expired in 2018. The two sides have operated under the terms of the expired CBA, but a change in payment structure for the women could give the men reason to demand better pay, too.

The union representing the men’s players, prior to Cordeiro’s resignation, released a statement of solidarity with the women, concluding by saying, “We continue to wait for U.S. Soccer to respond to our January 2019 proposal for equal pay and equal working conditions for USMNT and USWNT players, so we can work towards a new collective bargaining agreement for the men’s national team and a fair deal for equal compensation and working conditions for the U.S. Women’s National Team.”

Also, the May 5 trial date is subject to change in light of the coronavirus pandemic. Federal courts in multiple states have postponed trials for a period of weeks. More postponements are expected in the days ahead. These postponements will likely impact the timing of trials and hearings that are scheduled over the next several months. There has been no change yet to this case’s date; however, depending on the trajectory of the pandemic, U.S. Soccer and and the women’s players might have more time to strike a deal before their trial would begin.