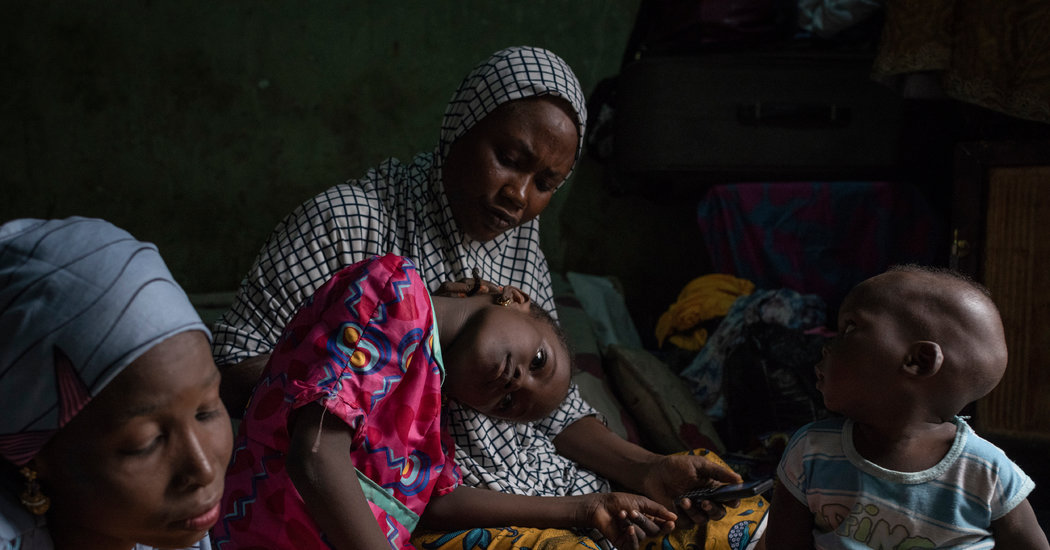 MAIDUGURI, Nigeria — The six young women set down their bombs and stood around the well, staring into the dark void.

As captives of Boko Haram, one of the deadliest terror groups on earth, the women had been dispatched for the grimmest of missions: go blow up a mosque and everyone inside.

The women wanted to get rid of their bombs without killing anyone, including themselves. One of them, Balaraba Mohammed, then a 19-year-old who had been blindfolded and kidnapped by Boko Haram a few months earlier, came up with a plan: They removed their headscarves and tied them into a long rope. Ms. Mohammed attached the bombs and gingerly lowered them into the well, praying it was filled with water.

“We ran for our lives,” Ms. Mohammed said.

In the decade-long war with Boko Haram that has coursed through northeast Nigeria and spread to three neighboring countries, more than 500 women have been deployed as suicide bombers or apprehended before they carried out their deadly missions — a number that terrorism experts say exceeds any other conflict in history.

Some, like Ms. Mohammed and the women at the well, have bravely resisted, foiling the extremists’ plans in quiet and often unheralded ways.

But most women who broke away from Boko Haram keep their abductions secret, knowing they would be stigmatized as terrorist sympathizers even though they were held against their wills and defied the militants. They walk the streets of Maiduguri in the shadow of billboards celebrating the heroism of Malala Yousafzai, who was shot for standing up to the Taliban.

The women are often forgotten, not unlike the more than 100 schoolgirls kidnapped from the village of Chibok who remain missing — nearly six years after their abduction caused such global alarm.

Dozens of women interviewed by The New York Times have said that Boko Haram gave them a terrible choice: “marry” the group’s fighters or be deployed as bombers. Captives have said some women chose instead to blow up only themselves.

But some survived and want to tell their stories. Ms. Mohammed is one.

Ms. Mohammed said she arrived at the Boko Haram camp in a daze in 2012. Boko Haram had murdered her husband in front of her after he criticized the group. Days later they came back for Ms. Mohammed, throwing her baby to the ground and abducting her. She thought her daughter was dead.

At the camp, Ms. Mohammed said she listened as two women began discussing ways to kill themselves so they would no longer have to suffer there.

A militant overheard them and became angry.

“What is so difficult about killing yourselves?” he asked.

He shot them both to death.

“I was so scared,” Ms. Mohammed recalled.

She considered suicide, but she thought of her ailing grandmother who needed her as caretaker. To get out of being married off to a fighter, she said she feigned sickness. To get out of weapons training, she faked mental illness.

When fighters gave her a bomb, she said, “I felt as if I was dead.” She knew she would have to go, or be shot too.

Which is how she found herself with five others at the edge of that well.

The bombs didn’t detonate and the young women, scared and unsure what to do, ran back to the Boko Haram camp, Ms. Mohammed said. They swore on a Quran to their captors they had accomplished their mission, and that they ran so fast to escape that they lost their hijabs on the way.

Cheers went up, and the fighters convened a feast to celebrate the women they thought had become killers.

The six women, two of them barely teenagers, had outsmarted Islamist extremists.

But the women’s relief was short-lived.

Fighters soon decided they were ruthless enough to be ready for weapons training, she said, handing them guns and lining up other captives for live target practice.

One of the girls who had thrown her bomb into the well was so distraught that she ran into the hail of bullets in the firing squad, killing herself, Ms. Mohammed said.

For women trying to escape Boko Haram’s clutches, all the options are bad. Those trying to surrender to the authorities are sometimes killed by nervous soldiers, according to UNICEF . Members of a civilian vigilante force said they had shot one woman last year who approached their outpost on the edge of Maiduguri, and her bomb exploded.

One teenager, whose name was withheld for security reasons, was 16 when she said she was drugged and strapped with a suicide belt and sent out with two other women who also carried bombs to blow up soldiers at a checkpoint. One of the women had an infant strapped to her back. The three decided they would turn themselves in.

As the group approached the checkpoint to surrender, one of the women stopped behind a tree to urinate, the teenager said. When the woman squatted, her bomb accidentally detonated. Soldiers heard the blast and ran toward the group. Terrified, the woman with the infant ran off, untying the baby, who dropped to the ground. The baby girl sat on the ground crying, and the teenager thought of her own baby, who had died of starvation a month earlier in the Boko Haram camp where they were held hostage.

The teenager, her bomb still attached, said she picked up the child and soothed her until soldiers removed her explosives. She still cares for the girl, now age 3, and plans to never tell her that she is adopted.

After the trick at the well, fighters sent Ms. Mohammed and the other women on a second suicide mission, replacing the girl who had died by running into the firing squad with a new captive. She said their target was to be a market in Banki, a once-bustling town. One of the fighters planned to escort the women. But the new captive assured the militants she was from Banki and knew her way through the countryside.

Again, the women collected their bombs and used their hijabs to lower them into the well. They sprinted back to the fighters’ camp expecting the same joyous reception.

But fighters were shocked to see them arrive so soon.

Just then, the radio crackled with news: a bombing had been reported in Banki — but in a small village outside the main town, not in the market. The fighters turned on the new captive, thinking she had led the women to the wrong place.

They shot her to death.

Days went by and fighters came and went, engaging in fierce battles that claimed some of their lives. They wanted revenge. They prepared Ms. Mohammed and other women for a major operation, to blow up the Monday Market, the biggest in northeast Nigeria.

They loaded some 20 cars, motorbikes and stolen military trucks with bombers and fighters and drove to the market. Ms. Mohammed said she was sick, and too weak to even get out of the car. She sat inside as bombs exploded and the vehicle sped away.

Ms. Mohammed was driven back to the camp and remained ill for several days, locked in a tin shack with other captives as they listened to fighters preparing for vigilante forces to invade the camp.

“I was saying in my heart that ‘Oh God, even if I would die, let my relatives find my corpse,’” she said.

She heard gun shots and a loud noise. She lost consciousness.

Hadiza Musa, who had joined the local vigilante force to avenge the Boko Haram capture of her sister, arrived to find a horrific scene: the entire camp was on fire and there was carnage everywhere. In an attempt to distract the vigilantes, Ms. Musa said, it appeared that Boko Haram had blown up their own camp and their captives, and fled.

Ms. Musa said she sifted through the dead and came across Ms. Mohammed, who was unconscious with burns covering her body and blood pouring from what looked like a bullet wound to her leg. Ms. Musa cried as she helped ferry Ms. Mohammed to a hospital.

Ms. Musa stayed by Ms. Mohammed, caring for her until she was conscious. She tracked down her grandmother and told Ms. Mohammed the first good news she had heard in months: her baby, Hairat, was alive.

Boko Haram is still plaguing Maiduguri, where their movement began. Last month, militants attacked vehicles lined up at a checkpoint outside the city, killing at least 30 people, some who burned to death while sleeping in their cars, local officials said.

When President Muhammadu Buhari arrived in Maiduguri to console mourners, he was jeered. The Nigerian military has struggled to gain the upper hand against fighters now armed with drones, machinery and weapons they have stolen from raiding military encampments and convoys.

Recently, the numbers of suicide bombings have declined as Boko Haram and its factions have focused on targeting military forces. Yet the incidents persist. In January in nearby Chad, a woman bomber killed nine people, and in Maiduguri, two female bombers blew up a market, killing two people.

In all, more than 540 women and girls have been deployed or arrested as bombers since June 2014, according to an estimate by Elizabeth Pearson, a lecturer at Cyber Threats Research Center and at Swansea University in Wales who reviewed years of media and United Nations reports.

Ms. Musa and Ms. Mohammed now consider themselves sisters. Ms. Mohammed still bears scars from burns to her face, arms and legs. In Maiduguri where she lives with Hairat, who is now in first grade, some neighbors who know she was abducted are suspicious and think she might be loyal to Boko Haram.

“The best thing is for you to be killed,” a neighbor told Ms. Mohammed.

She tries to ignore those kinds of comments. After all, she knows none of the ordeal was her fault. She pays for Hairat’s schooling by knitting caps and selling soft drinks from a rented mini-refrigerator. She makes regular trips to the morgue to search for her brother’s body; he disappeared after he dropped out of college to join the vigilantes to avenge Ms. Mohammed’s capture.

Ms. Mohammed has started training to become a nurse. She wants to give back. But she couldn’t afford fees for recent exams after an uncle kicked her out of his house, still suspicious of her time with militants.

Until she can save up money for the exam, she keeps a first aid kit with her, in case she comes across anyone needing help.