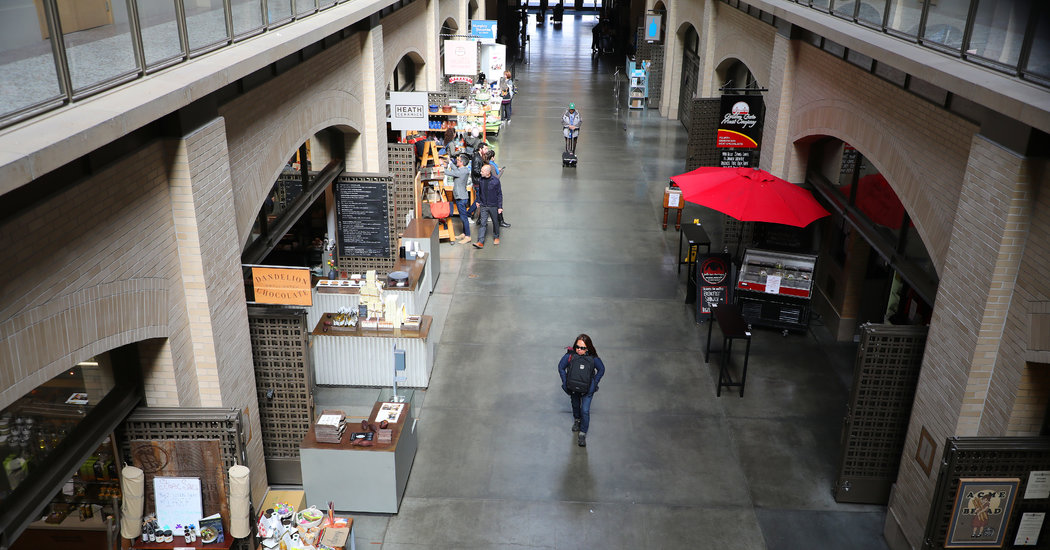 Each week, we review the week’s news, offering analysis about the most important developments in the tech industry.

Hello from our new market-melting, social-distancing, work-from-home reality. This is Erin Griffith, a start-ups and venture capital reporter in San Francisco. I hope you are staying sane while staying inside.

I’m calling this past week The Tom Hanks Awakening. Seemingly from the moment news broke Wednesday evening that Mr. Hanks, our American treasure, had tested positive for the coronavirus, conversations about the virus shifted from half-measures and are-we-overreacting Twitter debates to blanket cancellations and true fear. A number of prominent tech companies, like Twitter, shifted from recommending that employees work from home to issuing mandatory policies.

(Not to diminish the power of Mr. Hanks, but the rapid spread of the virus across the country and the World Health Organization’s declaration of a pandemic may have also nudged things along.)

For the tech industry, that means more fallout and some opportunity. Every business, from small start-ups to the largest tech companies in the world, is preparing for a challenging year.

For many large, unprofitable start-ups, this will be the first true test of whether their businesses can withstand a downturn. Many of the industry’s most prominent start-up “unicorns,” including Uber, Airbnb and WeWork, have long boasted that they were born in the recession of 2008-09. They capitalized on the moment by giving people who were laid off in the downturn flexible “gig economy” work and office space. Therefore, the thinking goes, they can survive the next one.

But their businesses are now global, with tens of thousands of employees and delicate networks of millions of customers, drivers, home-rental operators — and, in WeWork’s case, potentially germ-laden office spaces. This is a whole new kind of test for their business models.

For example, many Airbnb hosts have seen their bookings fall off a cliff as the company grapples with travel cancellations. This past week, the company made its refund policy more flexible to encourage people to book travel. It even set up a small fund to keep Chinese hosts afloat during the outbreak. Tracey Northcott, a full-time Airbnb host in Japan whom I interviewed for an article, said she had lost $40,000 worth of bookings for April. She is trying to stay upbeat, joking that she may need to start selling off her supplies of toilet paper to make ends meet.

The newly announced ban on European travel to the United States only adds to the blow.

Drivers for Uber, Lyft, DoorDash, Instacart and Postmates petitioned those gig-economy companies for better protections for those affected by the virus. The companies responded by proposing a fund that would pay drivers who have been quarantined or infected. It’s a small gesture of support for the workers, many of whom have no other safety net. But it further strains these money-losing businesses when they’re already under pressure to show investors they can turn a profit.

Some companies are set up to thrive in this moment. Digital-learning services are in demand as schools close. The stock prices of remote-working tools like Zoom surged. Telemedicine is growing. Fitness fanatics are flocking to at-home workout systems like Peloton. Teenagers are turning to Instagram memes to get their virus news. Streaming and video-game companies like Netflix and Activision Blizzard and delivery services like Amazon and GrubHub have been added to stock-picker lists.

Some stories you shouldn’t miss

We’d love your feedback on this newsletter. Please email thoughts and suggestions to bits_newsletter@nytimes.com.