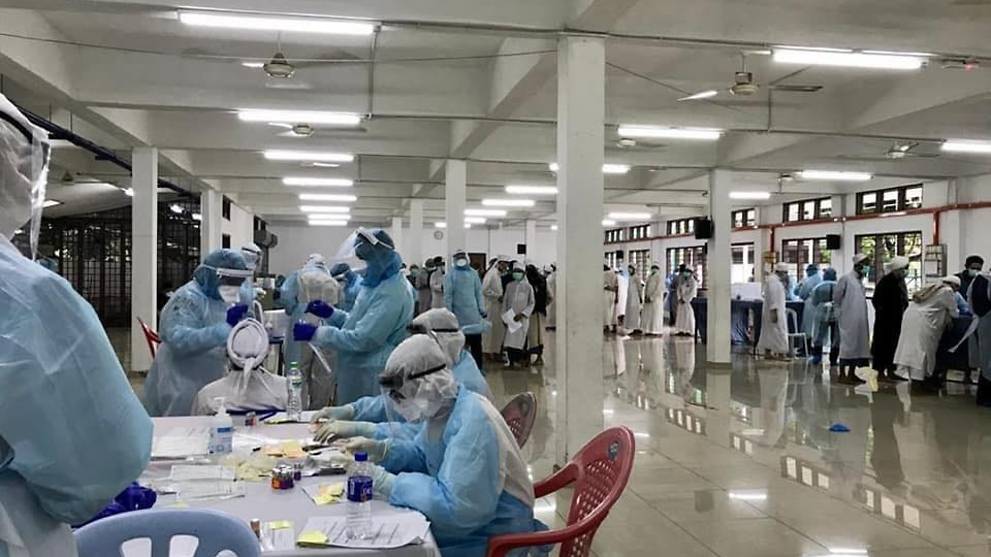 KUALA LUMPUR: Malaysia’s health officials have been working round the clock to conduct mass COVID-19 screenings at Masjid Jamek Sri Petaling, as the health ministry confirmed on Friday (Mar 13) that a tabligh (religious) rally held at the venue was earlier attended by about 16,000 people.

“Our health officers from Lembah Pantai are supported by staff deployed from other states to trace and track all participants.

“It’s indeed a mammoth and daunting task. However, we need to prepare to share the responsibility as everyone can help to protect themselves and their communities,” he said in a Facebook post.

In a separate post, Dr Noor Hisham shared a chart that stated that about 14,500 out of some 16,000 participants were Malaysians.

The mass religious event has sparked fear of new cluster transmission following the report of Brunei’s first COVID-19 patient, who was a participant at the mosque gathering, and the positive diagnosis of six Malaysian cases linked to the event.

The six originated from Negri Sembilan, Johor, Pahang and Sabah, while on Friday, Sarawak reported its first three COVID-19 cases traced to the same event.

Health Minister Adham Baba had said on Thursday that the mosque would be temporarily closed for disinfection.

He also urged those who attended the event to get tested immediately if they begin to experience symptoms of COVID-19.

Dr Zulkifli Mohamad Al-Bakri, the minister in-charge of religious affairs, called for Friday prayers to go on as usual with some adjustments put in place, such as shortening the sermon and encouraging Muslims to make ablutions at home.

However, earlier on Friday, there were questions on whether the prayers would be called off, after Perlis Islamic authorities directed Muslims in the state not to perform Friday prayers at mosques.

Dr Zulkifli issued a statement later to state that Friday prayers at federal territories would still be held for the day.

Separately, the Selangor Islamic Religious Department decided to impose a temporary ban on tabligh events in all mosques and surau in the state.

Malaysia has a total of 158 cases as of Thursday.

Meanwhile, in Singapore, two of the 82 Singaporeans who have attended the tabligh event tested positive, prompting the Islamic Religious Council of Singapore to close all mosques for at least five days.