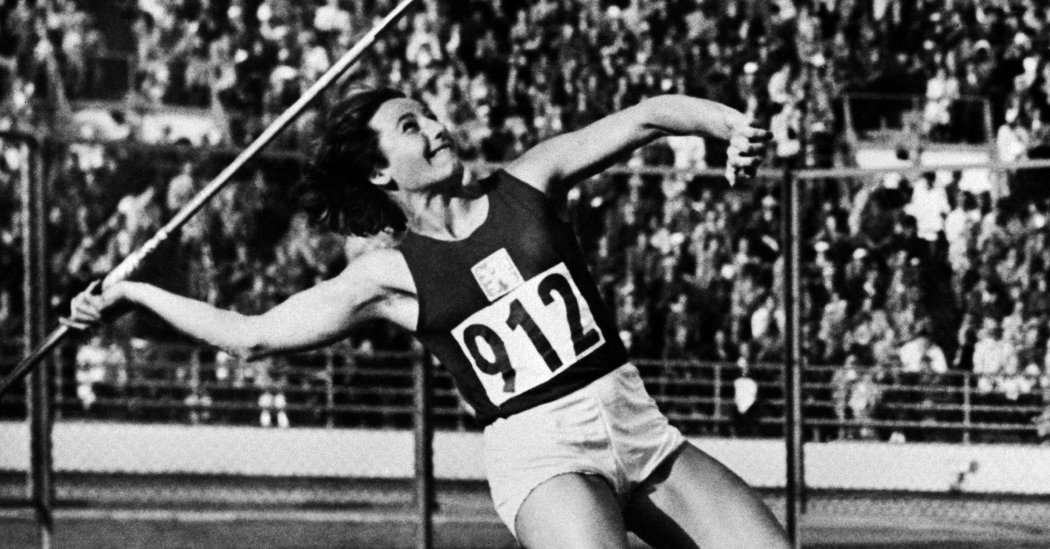 Dana Ingrova was born on Sept. 19, 1922 — the same day, month and year as Zatopek — in southern Moravia. (Zatopek was born in northern Moravia.) She was an outstanding team handball player until college, when she was said to have thrown a javelin 34 meters (111 feet 6 inches) the first time she picked one up. A week later, she was said to have won the Czechoslovak javelin championship.

In 1948, when she threw the javelin far enough to make the Czechoslovak Olympic team, Zatopek congratulated her, and a relationship began. In London, before the Olympics, they were in a lime tree picking a blossom for her mother when, as she recalled, Zatopek said, “I think that it could be quite fine for us to get married.”

They did, two months after the London games, and the marriage lasted 52 years, until Zatopek’s death in 2000. They had no children.

In 1956, in the midst of the Cold War, the Zatopeks were the official witnesses at the storybook wedding in Prague of Harold Connolly, an American hammer thrower, and Olga Fikotova, the Czechoslovak discus thrower.

During Zatopkova’s career, she won the European championships in 1954 and 1958 and broke the Czechoslovak javelin record 17 times, paving the way for such Czech Republic javelin throwers as Jan Zelezny and Barbora Spotakova, the current world record holders. In 1988 she was honored with the Olympic Order for distinguished contributions to the Olympic movement.

Zatopkova retired after the 1960 Olympics and went on to coach and serve in track-and-field administrative positions. Her husband became a high-ranking Army officer but was stripped of his rank by the Communist government of Czechoslovakia and made a manual laborer in 1968, when he opposed the Soviet-led invasion of Czechoslovakia. Seven years later, the government said he had been rehabilitated and more or less forgave him.