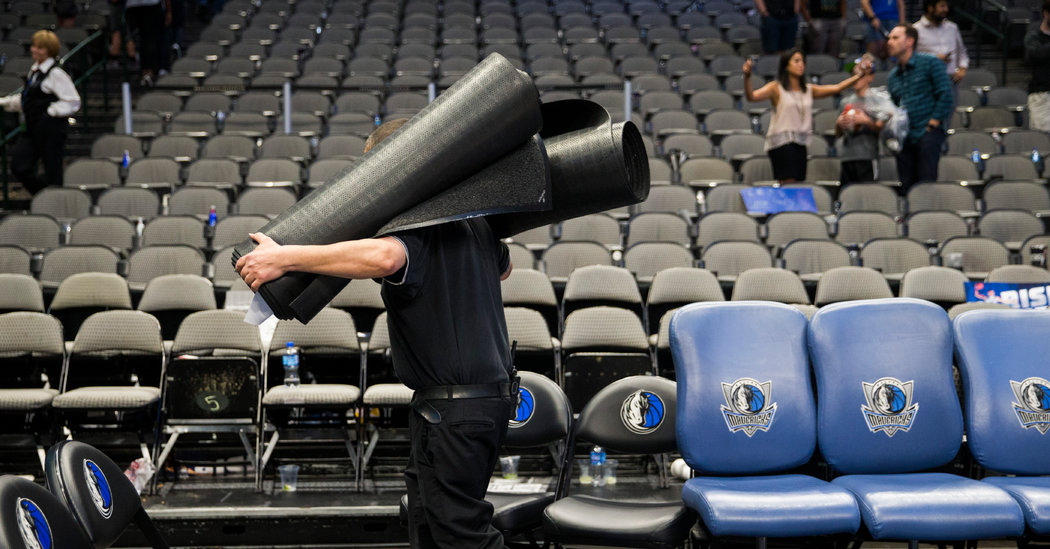 One by one, beginning Wednesday night and all through Thursday, the pillars of the American athletic landscape toppled, unceremoniously, to the ground, marking one of the most astonishing nights and days in United States sports history.

Before Thursday, Americans could have held some hope that the country’s traditional sports leagues would, in the coming weeks, supply moments of needed respite and emotional escape from the weighty concerns of the coronavirus pandemic.

Instead, within a matter of hours, a sudden, stunning void opened upon the sports scene, as it became clear that no subsection of society — even seemingly shatterproof, multibillion-dollar sports leagues populated by so many of the nation’s larger-than-life public figures — would go untouched by the outbreak.

The disruptions and postponements and cancellations, which had started last week at a drip-drop pace, a game here and there, swelled on Thursday into large, devastating waves that seemed poised to cause far-reaching competitive and financial repercussions for nearly everyone associated with these games and this business for years.

The N.H.L. paused play in the final stretch of its regular season, vowing to resume “as soon as it is appropriate and prudent” to crown a champion for the 2019-2020 season.

Major League Baseball canceled its spring training schedule midswing and delayed its opening day, scheduled for the end of March, by at least two weeks.

Major League Soccer postponed all of its matches for 30 days, and the national soccer teams declared they would not step on a field at least through April.

And late in the afternoon, the N.C.A.A.’s national basketball tournaments, among the most anticipated sporting events of the season, were canceled, planting a dramatic exclamation point onto a relentlessly depressing day.

“I don’t think in my lifetime I’ve seen a reaction anything like this,” said Fay Vincent, who was born three years before World War II and served as commissioner of baseball from 1989 to 1992. “It’s really a health and business crisis.”

The leagues were following in the wake of the N.B.A., which had put its own season on hold late Wednesday night. Two of its players have tested positive for the virus.

It was almost unreal to see the sports leagues buckle under the pressure of an unseen, outside force. These institutions are more often seen throwing around their considerable financial might and cultural capital, and are frequently viewed as secure in their near-religious place in American society. And for a time, it even seemed they might resist the coronavirus, too: various half-measures — like locker rooms closed to the news media, arenas closed to fans, games transferred to neutral sites in areas less affected by the virus — were pursued in recent days as solutions to keep athletes safe and sports afloat through the pandemic.

But little by little, over the course of the week, the decision to play on seemed to be clawed from their hands. The pressure came from all over.

Local and state governments increasingly took actions that left the leagues with little to no wiggle room. Gov. Mike DeWine of Ohio on Thursday announced a ban on public gatherings of more than 100 people. In New York, a similar restriction was placed on gatherings of 500, which effectively forced the closing not only of sports arenas in the city but also its theaters and museums.

A solemn address on Wednesday night from the Oval Office by President Trump, who had previously played down the severity of the coronavirus, seemed to settle, once and for all, the severity of the moment, as if the roiling of the world’s financial markets hadn’t already.

And once one of the professional leagues decided to shut down operations, it appeared inevitable that others would follow like tumbling dominoes.

“There is an enormous concern in the sports world not to be left out there to be criticized,” Vincent said. “One thing about a herd is if it all merges together, there’s some safety in it. That’s why it exists.”

Such swift, dramatic actions produced a series of sometimes bizarre vignettes around the country’s sports arenas, and even some overseas.

The Baltimore Orioles were aboard their team bus, headed to Fort Myers, Fla., for a spring training baseball game against the Minnesota Twins when it was halted and turned around.

St. John’s and Creighton had played a half of basketball in the Big East tournament quarterfinals at Madison Square Garden before their game was called off and everyone was sent home.

The N.B.A. player Rudy Gobert, the first athlete on a major American professional team to test positive for the virus, apologized on a social media account about a widely circulated video that showed him jokingly touching microphones with his hands during a news conference earlier in the week, before his positive diagnosis.

In Joensuu, Finland, members of the United States biathlon team preparing for a tournament there this weekend were awakened in their hotel rooms by staff members at 3 a.m. — just after Mr. Trump announced a travel ban from Europe — and told to gather their belongings. Less than three hours later, they were on a series of flights arranged by the team’s leadership — to Helsinki, then Munich, then to the United States — to bring them home.

“They packed their bags quick,” said Max Cobb, president of the biathlon federation, who made the decision to recall the athletes. “We didn’t ask them. There wasn’t time. We felt like if we were going to get these guys out today we needed to make the decision and go for it. And we did.

“This is something way bigger than sport,” Cobb said.

That notion — that sports should take a back seat to graver concerns at a time like this — was commonly espoused on Thursday.

But it remained to be seen what affect the disappearance of sports from American stadiums and television sets would have on the nation.

Vincent noted that baseball continued to be played during other national crises, including World War II, filling an important role in asserting the identity of the country and steadying morale through periods of public anxiety.

In recent days, as recommendations of “social distancing” put more strains on the connective fabric of American society, the collective act of watching sports seemed to have had the potential to help hold it together, if only through screens and social media feeds.

A deadly pandemic demanded a different sort of action. And the American sports landscape, in period of less than 24 hours, was left utterly denuded.