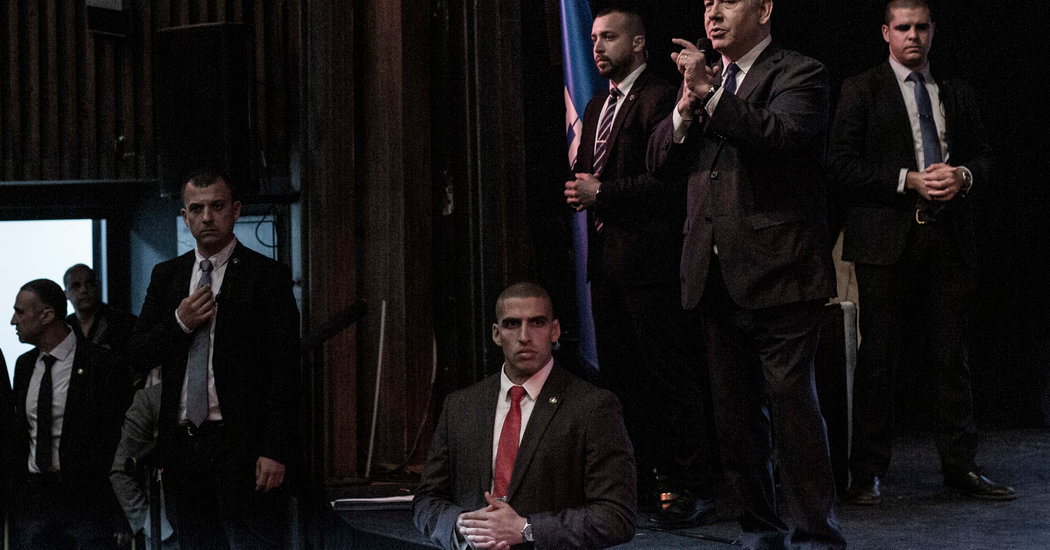 But one thing has kept them from uniting to send him packing: A sizable chunk of the anti-Netanyahu majority consists of Arab lawmakers, and the Jewish ones cannot agree on whether to consider them partners or the enemy.

His opponents, led by the former army chief Benny Gantz, who held coalition talks with Arab party leaders on Monday, say a vote is a vote, and that Mr. Netanyahu is happy to rely on those same lawmakers when it suits him.

But even some of Mr. Gantz’s supporters balk at teaming up with Arab politicians, saying that a state established to protect the Jewish people, and still in conflict with the Palestinians, cannot entrust weighty policy decisions to people whose sympathies may be with the other side.

The roiling debate, which has set back the effort to depose Mr. Netanyahu and could force Israel to hold a record fourth election, turns on a question at the heart of the country’s existence as a democratic and Jewish state:

Are the votes of Arab citizens worth as much as those of Jews?

Arab citizens make up a fifth of Israel’s population and for the first time have come close to proportional representation in Parliament. The predominantly Arab Joint List won nearly 582,000 votes and a record 15 parliamentary seats, enough to be decisive in an election in which neither Mr. Netanyahu’s bloc nor Mr. Gantz’s won a majority.

But Mr. Netanyahu declared those votes “not part of the equation.” The Joint List, he said, “attacks our soldiers and opposes the State of Israel.”

Critics said his dismissal of the Arab vote was not only self-serving — the 15 seats combined with Mr. Gantz’s coalition would boot Mr. Netanyahu from office — but also racist and antidemocratic.

“Dismissing more than half a million citizens by rendering the 15 members of the Joint List illegitimate, coupled with incitement against anyone who engages with them, crosses a red line,” Yuval Diskin, a former head of the internal security agency, wrote Wednesday in Yediot Ahronot.

“He’s appealing to racists,” Dan Meridor, a former minister from Mr. Netanyahu’s Likud party, said in an interview. “And it goes against a basic tenet of Zionism: We strove for a Jewish majority in the land. The assumption was, Arabs vote. Otherwise why would you need a majority?”

But Jewish reluctance to rely on Arab support in forming a government is so widely felt that three lawmakers backing the centrist Mr. Gantz have now said they would not go along with such a coalition.

In the parliamentary math obsessing the country this week, the loss of three seats would deny Mr. Gantz a majority even if he joined forces with the Arab members.

That equation leaves Israel mired in the political standoff that has paralyzed the government for more than a year, with Mr. Netanyahu clinging to power even as he faces trial on corruption charges starting next week, and Mr. Gantz refusing to join a coalition that leaves Mr. Netanyahu in charge.

But the dilemma cuts deeper than who leads the next government. Throughout its history, Israel has held its Jewish essence and its democratic system in an often uneasy balance. It could now wind up giving one primacy over the other.

“They are saying that our votes don’t count exactly because this time we are able to change the game,” said Aida Touma-Suleiman, a lawmaker from the Joint List’s far-left Hadash party.

In the past, when Arabs have complained about the lack of democracy, she said, Israeli politicians have pointed to the fact that Arabs have the right to vote and hold office. And some do, including in Parliament and on the Supreme Court.

“Today, when our power is gradually increasing, they’re showing their real belief, that we shouldn’t be able to have any real influence,” she continued.

But even Jewish critics of Mr. Netanyahu who accuse him of exploiting racist sentiment say that the issue is more complicated than that.

“When you’re taking cardinal decisions that affect existential aspects of Israel, there’s an argument to be made that there must be a Jewish majority behind those decisions,” said David Horovitz, editor of The Times of Israel. “It is not a simple dilemma.”

Israel, says Itamar Radai, an expert on Arab-Jewish relations at Tel Aviv University, is not “one nation under God,” like the United States, but rather two nations still locked in conflict over a single territory.

“Both have heroes who actually have killed people on the other side,” he said. “The question is not only about equal rights.”

The most common argument against allowing Arab lawmakers to play a decisive role in forming a government is a hypothetical: If rockets from Gaza rained down on Israel, would Mr. Gantz hesitate to respond forcefully out of fear that his government could fall?

Mr. Gantz’s defenders say Arab lawmakers would have no sway over such security decisions and would be unable to do much more than protest, as they do now.

Others say that in a democracy, worse things could happen.

“So it will fall,” said Itamar Rabinovich, a former Israeli ambassador to the United States. “But if it’s a different government, maybe there will be no shooting from Gaza. You could go much further than this government in making life in Gaza better.”

Those who say it is legitimate to delegitimize Arab politicians often cite the more extremist backgrounds of some Joint List members, particularly from the nationalist party Balad: One lawmaker, Heba Yazbak, had praised the convicted killer of a Jewish family of four and expressed support for an Israeli accused of spying for Hezbollah.

But extremists exist on both sides: Before the election, Mr. Netanyahu wooed a right-wing lawmaker known for keeping a portrait in his home of Baruch Goldstein, who massacred 29 Palestinians while they prayed at a mosque in 1994.

Mr. Netanyahu has long used Arab lawmakers like Ahmad Tibi, a onetime adviser to Yasir Arafat, as political foils to stoke right-wing anger. And on election day in 2015, he notoriously revved up his base by saying Arabs were going to the polls “in droves.”

But the question has come to a head because Arab citizens have never held as much power as they do now.

Until the March 2 ballot, they had generally shown up to vote at lower rates than Jews, or split their votes among several parties. This time, the Joint List captured nearly 9 out of every 10 Arab votes cast.

And with Arab citizens eager to get back at Mr. Netanyahu over a host of matters — including the 2018 adoption of a law declaring that only Jews have a national right of self-determination in Israel — they really did come out in droves.

Under military rule until 1966, Arab citizens — described by Israel’s first prime minister, David Ben-Gurion, as a potential “enemy within” — were a captive political audience, their lawmakers confined to satellites of Jewish political parties. The first independent Arab party emerged in 1988, but most Arab citizens continued to vote for Jewish parties.

Their political influence arguably peaked in 1992, when two Arab parties with a total of five seats supported Prime Minister Yitzhak Rabin, bolstering him during the land-for-peace Oslo process.

In return, Mr. Rabin delivered a host of reforms, said Mohammed Dawarshe, an activist and expert on Arab-Jewish relations: bigger budgets for Arab areas, equality in welfare benefits for families with children, and overdue infrastructure work in neglected Arab villages. “In my town of 7,000 people, there were probably less than five phones in 1992,” he said.

But after Mr. Rabin’s assassination by a right-wing extremist in 1995, Mr. Netanyahu’s election in 1996, under the slogan “Bibi is good for the Jews,” ended what Mr. Dawarshe said had been “the golden age of Arab citizens in Israel.”

In the 1970s, Arab citizens demanding their rights waved Israeli flags to demonstrate their loyalty, he said. But by the time the Second Intifada erupted in 2000, stirring nationalist feelings and sympathetic protests inside Israel, the flags were Palestinian.

“Many Jews saw those clashes as proof that Arab citizens are a fifth column,” Mr. Dawarshe said.

Regardless of what comes of Mr. Gantz’s effort to dislodge Mr. Netanyahu, Israeli Jews now need to find a new way of forging common cause with a galvanized, stronger and more confident Arab minority, Mr. Rabinovich said.

“If you’re a mainstream Israeli, you say, ‘OK, they don’t accept our claim to the land, we have different narratives, but we now both live in the same country, they’re equal citizens, and they’ve discovered their political might,’” he said. “If you have your head screwed on, you find a way of living with them.”