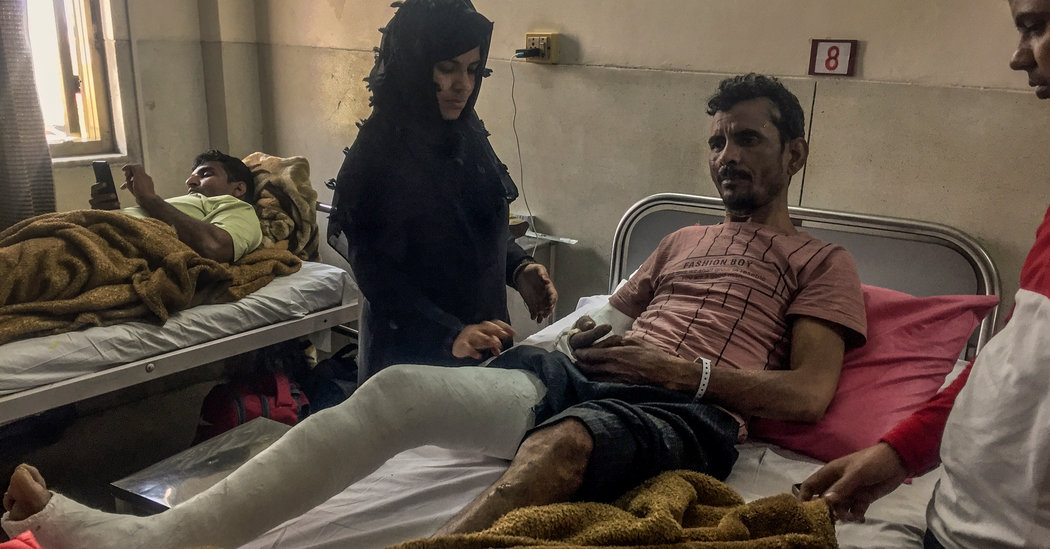 NEW DELHI — Kaushar Ali, a house painter, was trying to get home when he ran into a battle.

Hindu and Muslim mobs were hurling rocks at each other, blocking a street he needed to cross to get to his children. Mr. Ali, who is Muslim, said that he turned to some police officers for help. That was his mistake.

The officers threw him onto the ground, he said, and cracked him on the head. They started beating him and several other Muslims. As the men lay bleeding, begging for mercy — one of them died two days later from internal injuries — the officers laughed, jabbed them with their sticks and made them sing the national anthem. That abuse, on Feb. 24, was captured on video.

“The police were toying with us,” Mr. Ali said. He recalled them saying, “Even if we kill you, nothing will happen to us.”

So far, they have been right.

India has suffered its worst sectarian bloodshed in years, in what many here see as the inevitable result of Hindu extremism that has flourished under the government of Prime Minister Narendra Modi. His party has embraced a militant brand of Hindu nationalism and its leaders have openly vilified Indian Muslims. In recent months Mr. Modi has presided over a raft of policies widely seen as anti-Muslim, such as erasing the statehood of what had been India’s only Muslim-majority state, Jammu and Kashmir.

Now, more evidence is emerging that the Delhi police, who are under the direct command of Mr. Modi’s government and have very few Muslim officers, concertedly moved against Muslims and at times actively helped the Hindu mobs that rampaged in New Delhi in late February, burning down Muslim homes and targeting Muslim families.

India’s policing culture has long been brutal, biased, anti-minority and almost colonial in character, a holdover from the days of British rule when the police had no illusions of serving the public but were used to suppress a restive population.

But what seems to be different now, observers contend, is how profoundly India’s law enforcement machinery has been politicized by the Bharatiya Janata Party, Prime Minister Narendra Modi’s Hindu-nationalist governing bloc.

Police officials, especially in states controlled by Mr. Modi’s party, have been highly selective in their targets, like a Muslim school principal in Karnataka who was jailed for more than two weeks on sedition charges after her students performed a play about a new immigration law that police officials said was critical of Mr. Modi.

Some judges have also seemed to be caught up — or pushed out — by a Hindu-nationalist wave.

A Delhi judge who expressed disbelief that the police had yet to investigate members of Mr. Modi’s party who have been widely accused of instigating the recent violence in Delhi was taken off the case and transferred to another state. And at the same time that the Supreme Court has made a string of rulings in the government’s favor, one of the judges, Arun Mishra, publicly praised Mr. Modi as a “visionary genius.”

All of this is emboldening Hindu extremists on the street.

The religiously mixed and extremely crowded neighborhoods in northeastern Delhi that were on fire in late February have cooled. But some Hindu politicians continue to lead so-called peace marches, trotting out casualties of the violence with their heads wrapped in white medical tape, trying to upend the narrative and make Hindus seem like the victims, which is stoking more anti-Muslim hatred.

Some Muslims are leaving their neighborhoods, having lost all faith in the police. More than 1,000 have piled into a camp for internally displaced people that is rising on Delhi’s outskirts.

Muslim leaders see the violence as a state-sanctioned campaign to teach them a lesson. After years of staying quiet as Hindu lynch mobs killed Muslims with impunity and Mr. Modi’s government chipped away at their political power, India’s Muslim population awoke in December and poured into the streets, along with many other Indians, to protest the new immigration law, which favors migrants belonging to every major religion in South Asia — except for Muslims.

“You can read it in their books,” he said, referring to foundational texts by Hindu nationalists. “They believe India’s Muslims should live in perpetual fear.”

Mr. Modi has said little since the bloodshed erupted, except for a few anodyne tweets urging peace. Delhi police officials deny an anti-Muslim bias and said they “acted swiftly to control law and order,” which both Muslims and Hindus in those neighborhoods have said was not true. The police responded “without favoring any person on religious lines or otherwise,” according to a written reply to questions, provided by M.S. Randhawa, a police spokesman.

Police officials said that Mr. Ali and the other Muslim men were hurt by protesters and rescued by the police — though videos clearly show them being hit by police officers. Police officials also pointed out that one officer was killed and more than 80 injured; videos show a huge crowd of Muslim protesters attacking outnumbered officers.

The violence in New Delhi fits a pattern, experts say, of chaos being allowed to rage for a few days — with minorities being killed — before the government brings it under control.

In 1984, under the Congress party, which often bills itself as representing the interests of minorities, the police in New Delhi stood back for several days as mobs massacred 3,000 Sikhs.

In 1993, again under a Congress government, riots swept Mumbai and hundreds of Muslims were killed.

In 2002 in Gujarat, when Mr. Modi was the state’s chief minister, Hindu mobs massacred hundreds of Muslims. Mr. Modi was accused of complicity, though he was cleared by a court.

Several retired Indian police commanders said that the rule in quelling communal violence was to deploy maximum force and make many arrests, neither of which happened in Delhi.

Ajai Raj Sharma, a former commissioner, called the performance “unexplainable.” “It can’t be forgiven,” he said.

When the violence started on Feb. 23 — as Hindu men gathered to forcibly eject a peaceful Muslim protest near their neighborhood — much of it became two-sided. By day’s end, both Muslims and Hindus had been attacked, and dozens had been shot, apparently with small-bore homemade guns.

But by Feb. 25 the direction had changed. Hindu mobs fanned out and targeted Muslim families. Violence crackled in the air.

Police officers watched as mobs of Hindus, their foreheads marked by saffron stripes, prowled the streets with baseball bats and rusty bars, looking for Muslims to kill. The sky was filled with smoke. Muslim homes, shops and mosques were burned down.

When a reporter for The New York Times tried to speak to residents standing near police officers that day, a mob of men with darting eyes surrounded him and ripped the notebook out of his hands. When the reporter asked police officers for help, one said: “I can’t. These young men are very volatile.”

The home ministry, which controls Delhi’s police force and is led by Amit Shah, one of the most combative Hindu nationalists in the B.J.P., has come under heavy criticism for the policing failures. Delhi police officials denied being instructed by the central government to go easy on the troublemakers. The home ministry did not respond to repeated requests for comment.

And then there’s the composition of the police. The Delhi force, numbering around 80,000, has fewer than 2,000 Muslim officers and just a handful of Muslim commanders, according to an analysis done in 2017 by the Commonwealth Human Rights Initiative. Delhi police officials did not deny this, and Muslim leaders said that police behavior was biased across India.

“Indian police are extremely colonial and caste-ist,” said Shahid Siddiqui, a former member of Parliament. Police behavior, he said, is always “more violent and aggressive toward the weak.”

India’s population is about 80 percent Hindu, and gangs of Hindus are now threatening Muslims in several Delhi neighborhoods to leave before the Hindu holiday Holi this week.

One Muslim woman, who goes by the name Baby, opened her door a few days ago to find 50 men outside with a notebook in their hands, listing the addresses of Muslims. She packed up. She may be leaving soon.

“O, Allah, why didn’t you make me a Hindu?” she said, her voice quavering. “Is it my fault that I was born a Muslim?”