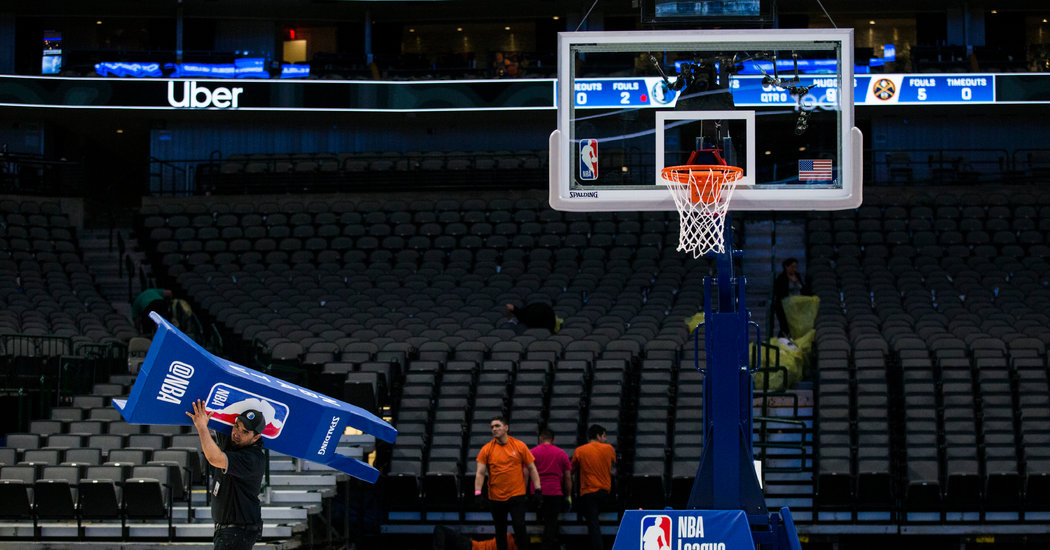 Sports around the world continued to be disrupted, and even halted, by the spread of the coronavirus.

The major development in the United States on Thursday morning was the cancellation of several major conference basketball tournaments, in some cases after they had already begun.

The Atlantic Coast, Big Ten, Big 12, Pac-12 and Southeastern Conferences all canceled their tournaments. Other leagues followed suit. The first game of the Big East tournament quarterfinals tipped off as scheduled at noon Thursday at Madison Square Garden, but the tournament was canceled at halftime, with St. John’s leading Creighton, 38-35.

The main events in college basketball, the N.C.A.A. tournaments for men and women, were still expected to be played, but without spectators.

The N.B.A. season was suspended on Wednesday night after Rudy Gobert of the Utah Jazz tested positive for the virus. A second Jazz player, Donovan Mitchell, later tested positive as well.

And Major League Soccer suspended its season for 30 days on Thursday.

Here’s where things stand as of Thursday:

Donovan Mitchell of the Jazz is now the second N.B.A. player known to have tested positive for the coronavirus, according to a person with knowledge of the situation who was not publicly authorized to discuss it.

The N.B.A. suspended its season after another Jazz player, Rudy Gobert, tested positive for the virus shortly before tipoff of a game against the Oklahoma City Thunder. Players for both teams were called back into the locker room and the game was canceled.

“As a follow-up to yesterday’s positive Covid-19 test, Oklahoma health officials tested all members of the Utah Jazz traveling party, confirming one additional positive outcome for a Jazz player,” the Jazz said in a statement. Mitchell’s diagnosis was first reported by ESPN.

Neither the N.B.A. nor the Jazz have identified the two players, though they have confirmed that two players have tested positive.

The N.C.A.A. will allow only essential staff and family at its national tournament games, normally the highlight of the college basketball season.

The 16-team team College Basketball Invitational, another postseason tournament, will not be played this year because of the outbreak.

The top European basketball competition, Euroleague, suspended all games in Italy until April 11 after several teams expressed a reluctance to play there.

The Miami Open, one of the top tennis tournaments in the country, was canceled on Thursday as the city’s mayor announced a suspension of large events, including a NASCAR race and major events at American Airlines Arena, the home of the N.B.A.’s Miami Heat.

The Miami Open was scheduled to run March 23 to April 5, with top players including Serena Williams, Novak Djokovic and the Australian Open champion Sofia Kenin. Its cancellation comes after the BNP Paribas Open, one of the world’s leading tennis tournaments, was also canceled because of the spread of coronavirus.

Soon after, the governing body of men’s tennis suspended tour events for six weeks, until April 27.

The Fed Cup finals, scheduled for Budapest in April, have been postponed.

Besides the suspension of M.L.S., United States men’s and women’s team friendlies in March and April have been canceled.

Games across Europe and other parts of the world are being played without spectators or postponed to help prevent the spread of the virus.

The Manchester City-Arsenal match on Wednesday became the first Premier League game postponed. Arsenal had played Olympiakos two weeks ago and some players and staff members had contact with Evangelos Marinakis, the Greek owner of Olympiakos, who has tested positive for the virus.

Spain suspended its top two divisions for at least two weeks. The star-studded Real Madrid team is in quarantine after a player for the club’s basketball team tested positive.

France will bar spectators at all games in the top two divisions until April 15. The League Cup final between P.S.G. and Lyon, originally scheduled for April 4, has been postponed indefinitely.

Portugal will play league games without fans for at least two weeks and Belgium for a week. All weekend games in the Bundesliga in Germany will be played without fans, a first for the league.

In Japan, J League games have been postponed. In China, the Super League schedule has not yet begun, with no date for a return set, as much of the country is under virtual lockdown.

All World Cup qualifying games in Asia were postponed until the fall. The Slovakia-Ireland playoff for Euro 2020 will be played without fans.

The PGA Tour will proceed, but will do so without fans at any event. An event set for the Dominican Republic later this month will be postponed.

President Trump added his voice to the conversation on Thursday, suggesting that the Games in Tokyo should be postponed for a year rather than being held without spectators. Thomas Bach, president of the International Olympic Committee, has insisted that the Games are on schedule to begin in late July, though a member of Japan’s Olympic organizing committee said Tuesday that postponing the Games would be discussed.

Mr. Trump’s comments came during a news briefing at the White House, where he discussed numerous measures his administration and others were taking to combat the spread of the coronavirus. “Maybe they postpone it for a year,” Mr. Trump said “Maybe that’s not possible.”

Regardless, he said he preferred postponing the Games to holding the events with no spectators. Postponing the Olympics would wreak havoc with the sports calendar for the summer of 2021, which is set years ahead of time and includes world championship competitions in several major sports.

The Olympic flame lighting ceremony in Greece on Thursday was held without spectators.

The France-Ireland game set for this weekend in Paris has been postponed, the third Six Nations match to be put on hold. For now, the last remaining match for the weekend, Wales-Scotland, will be played as scheduled.

The Seattle Mariners said they were working on alternative plans for their six home games scheduled for March, in accordance with a ban on large group events in the area, which was announced Wednesday. The ban will last at least until the end of March.

A cross-country World Cup race this weekend in Minneapolis was canceled.

The McLaren team pulled out of the Formula One season opener in Australia later this month after a team member tested positive. The race in China, scheduled for April, was previously postponed.