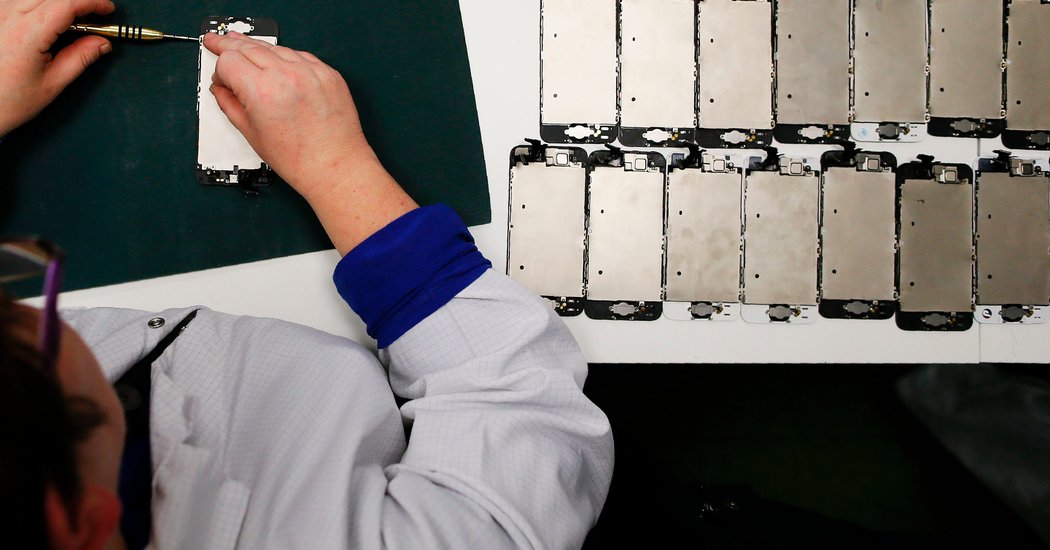 LONDON — Hoping to replace that two-year-old smartphone in a few months? The European Union wants you to think twice about doing that.

The bloc announced an ambitious plan on Wednesday that would require manufacturers of electronic products, from smartphones to tumble driers, to offer more repairs, upgrades and ways to reuse existing goods, instead of encouraging consumers to buy new ones.

The “right to repair,” part of a wide-ranging policy package known as the Green Deal that was introduced this month, is the latest example of the European Union’s ambitions to promote more sustainable economic growth and to prevent waste. It extends standards brought in last year that put “right to repair” obligations on the manufacturers of some large appliances.

“The linear growth model of ‘take-make-use-discard’ has reached its limits,” Virginijus Sinkevicius, the union’s environment commissioner, told reporters in Brussels as he presented the “Circular Economy Action Plan,” which includes the “right to repair” initiative.

“We want to make sure that products placed on E.U. market are designed to last longer, to be easier to repair and upgrade, easier to recycle and easier to reuse,” he added.

The plans are being put forward by the bloc’s executive arm, the European Commission. To become law, they would need to win the approval of the European Union’s Parliament and the governments of its 27 member states, a process experts say would take at least four years.

But Mr. Sinckevicius said the proposal reflected a growing demand from consumers. According to the commissioner, surveys have found that two-thirds of European citizens want their electronic devices to serve them longer. They have also indicated support for clearer indications on a product’s life span, easier repairs or more readily available replacement parts.

Manufacturers like Apple take old iPhones back when consumers buy a new one, but the E.U. plan wants them to go one step further: If implemented, it would encourage consumers to buy less and to keep a product in use as long as possible, and encourage industries to consider recycling only when a device is no longer usable.

Environmental groups said the plan represented a shift from the European Union’s current policy, which is mostly based on recycling. A law passed in 2012 required countries to collect 65 tons of electronic waste for every 100 tons of goods put on sale by 2019, but members have not met such targets. Less than 40 percent of European electronic waste is recycled, according to E.U. estimates.

With the “right to repair,” upgrading a phone’s software, replacing the battery of a tablet, or buying a new display for a laptop instead of changing the whole device would become easier, said Jean-Pierre Schweitzer, from the European Environmental Bureau, a network of environmental citizens’ groups.

“We know people are ready for it,” said Mr. Schweitzer, who focuses on circular economy and product policy at the network. “The measures that the commission wants to take on products and repair are very, very good.”

The plan also includes measures to introduce a common charger for smartphones — an effort that the European Union has long tried to implement, with little success — targets to reduce packaging, and a new framework to recycle batteries and textiles, among other measures.

Mr. Sinkevicius, the European commissioner, said the measures were essential if Europe was to meet its aim under the Green Deal: becoming a net zero emitter of greenhouse gases by 2050. “What we are trying to reach is a little bit different perception of the economic model,” he said this week.

But just as climate activists criticized the Green Deal as too vague, and for not setting a 2030 target, advocates like Mr. Schweitzer also faulted the European Commission for not setting broader, compulsory targets to reduce resource consumption.

“It’s not all negative,” Mr. Schweitzer said. “But where do we want the economy to be in the next couple of years? How much do we want to reduce our material or water footprint? We’re missing the big picture.”