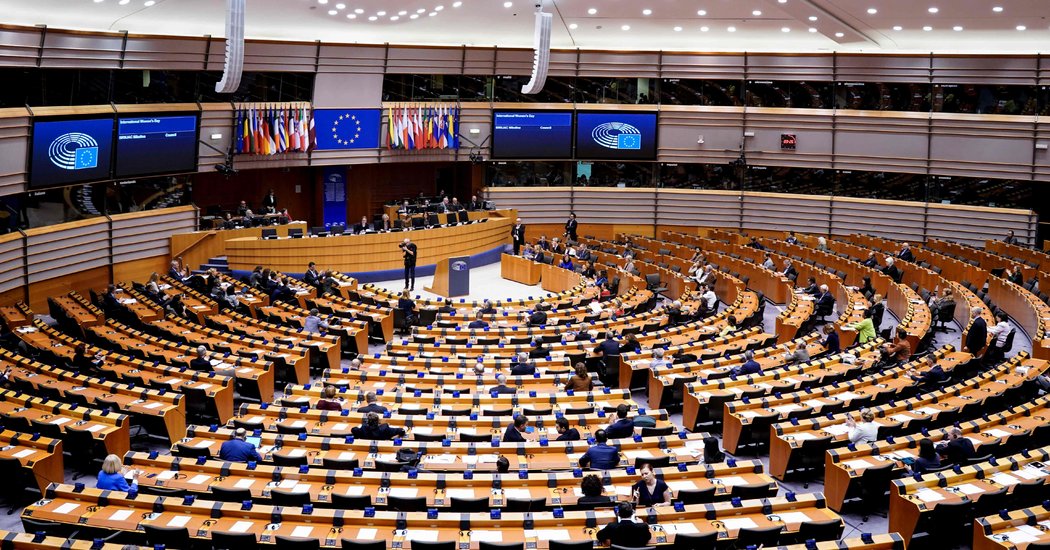 BRUSSELS — The rapid spread of the new coronavirus presents a severe test for democracies, for the European Union as an institution and for the trans-Atlantic alliance.

And so far, it has been every nation for itself.

While Italy begged for aid, the European Union appeared to delay and fumble, with member states ignoring calls for solidarity. The United States, for its part, chose to try to cut itself off from Europe.

President Trump’s decision to divide the United States from its European allies through a travel ban and blame them for inaction, rather than take a leadership role in cooperation and coordination, struck many analysts as particularly politicized and damaging, especially as European governments say the ban was imposed unilaterally, without consulting them.

But the search for scapegoats — first China, then Europe — is seen as part of the inevitable politicization of a crisis some are comparing to wartime.

The responses of democracies — especially as states take increasingly harsher steps, as in Italy, to control the movement of their own citizens, let alone foreigners — may be a significant boon to Europe’s far-right populists, who favor a strong nation state and oppose immigration and globalization.

“After 9/11 and the 2008 global financial crisis, this is the third big test of our decency and ability to cooperate, because the virus does not respect borders,’’ said Constanze Stelzenmüller, a German and senior fellow at the Brookings Institution. “We need to cooperate across the board, in health management and fiscal stimulus.”

For the European Union and the new team at its executive arm, the European Commission, led by Ursula von der Leyen, this pandemic is a challenge to her intention to have a “geopolitical commission,’’ Ms. Stelzenmüller said — ‘‘if the member states let her.”

This is a major test for the European Union, with the virus piled on top of existing crises over migration and rule of law, said Paul Adamson, founder of Encompass, a journal on Europe. “European values, solidarity, sticking together sound like hollow phrases, and we haven’t reached a spike in the virus yet,” he said.

Over time, the virus itself may impose its own kind of discipline on feckless political leaders. The virus does not respect rhetoric, inaction, a lack of coordination, or restrictions with gaping loopholes — all of which it is already exposing.

“It’s very evident how little cooperation there has been among member states and how slow governments have been in supporting the economy,” said Rosa Balfour of the German Marshall Fund in Brussels.

“The European Union has chosen to wait and see,” she added. ‘‘The virus can be a transformative moment and I’m not sure that the E.U. will rise to that.”

Even Chancellor Angela Merkel of Germany, who was praised for speaking in rational terms on Wednesday about how as many as 70 percent of Germans could catch the virus, was criticized for not announcing strong measures proportionate to that diagnosis.

“I’d also like to see the German chancellor say that ‘we’re all in this together,’ and that the Italians will get extra support from us,’’ Ms. Stelzenmüller said.

Instead, that was left to the Chinese, who immediately sent Italy medical experts and promised to provide cheaply 2 million face masks, 20,000 protective suits and 1,000 respirators.

“And that just feeds Salvini,’’ said Charles Grant, director of the Center for European Reform, referring to Matteo Salvini, the Italian far-right populist who is a sharp critic of immigration, globalization and the European Union itself.

Matters will get worse with the economic impact of the crisis, Mr. Grant said. “The euro crisis could return, because there are too many bad debts in banks,’’ especially in Italy, “and there is still no proper bank resolution regime and no eurozone deposit insurance.’’

The populists, he said, “will make hay with that.’’

If the virus proceeds at pace and governments respond less effectively than in South Korea or Singapore, criticism “will feed into an already troubled political climate, with general frustration and resentment of government,’’ said Simon Tilford, director of the Forum New Economy, a research institution in Berlin.

Those frustrations will only be made worse by the severe economic shock that the virus is likely to deal to a Europe barely growing, he said.

“If governments mishandle the policy response to the economic downturn, the political reaction could be toxic at home and for the European Union,’’ Mr. Tilford said. Italy is particularly explosive, he said.

“There’s already a backlash against globalization and openness there, a strong feeling that the country has been on the losing side of globalization and the euro, that the elite have not defended the national interest, and that Italy has already been badly let down by the E.U. over migration,’’ Mr. Tilford said.

The virus, he said, “is clearly a gift to the populist right in Europe.’’

Yascha Mounk, an expert on democracy and populism at Johns Hopkins University, notes that while the virus may aid populists in opposition, it could also undermine populists who are in power.

“You can have a reality-free administration as long as you don’t face a major crisis,” he said. “But in the face of a global pandemic, braggadocio and denial of reality will display the credibility crisis populists face.”

But if more traditional leaders like Ms. Merkel “have spoken in more honest and serious ways, competent governments are also failing badly in their responses,” Mr. Mounk said.

“Merkel is more forthright about the facts but fails to draw the obvious conclusions,’’ he added, pointing out that German schools were still open, major sports events continued, and people had not been urged to work from home.

“So populists will respond first with a denial of facts and responsibility, of how bad the situation is,” Mr. Mounk said. “Then they’re likely to admit it’s bad but pretend it’s all the fault of everyone else and that they have been fighting a valiant struggle against the virus all along.”

Mr. Trump’s decision to try to isolate the United States is not by itself irrational as an effort to slow the pace of the disease, said François Heisbourg, a French analyst, noting that Israel had taken even tougher action without criticism.

The problem is the way that Mr. Trump had aimed the ban at the European Union, which he has already labeled an economic foe, Mr. Heisbourg said, while allowing flights to continue from countries like Turkey.

That underlines the sense in the Europe Union that it is being opposed by “three predators — Russia, China and the United States, which all seek to destroy it,” he said.

“For Europe this is a very big moment, which requires faster action by states to lock down people, because the longer the delay, the worse the consequences,” Mr. Heisbourg said. “A pandemic carries the same logic as a war, and in war, it’s the results that count. The state is at the center, and it’s not a situation where the normal pace of democratic debate can handle the crisis.”

Rates of infection are following the Italian pattern, and if Brussels and states do not respond more forcefully and faster with strong executive action, Mr. Heisbourg said, they are inviting larger trouble.

“Then you leave the field to the populists and you’re dead, because here the populists are right,” he said. “Even democracies behave more like authoritarians in a war.”