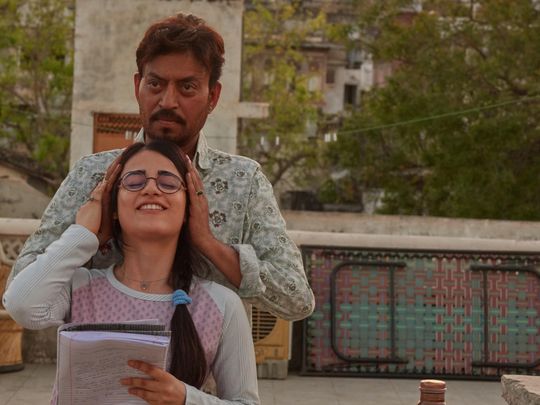 Stars: 3.5 out of 5 (The extra half for Irrfan Khan’s glorious return to the big screen)

‘Angrezi Medium’, a tale about a doting father from a small Indian town going to bizarre lengths to enrol his daughter into a university in London, is a crash course on incredible collective acting and a lost opportunity.

My favourite part? Taru tells her father she wants to study in that UK and he goes, “You want to study in Uttarakhand?”. That scene encapsulates his character’s boyish innocence and his lack of worldliness or exposure.

Khan is perfectly cast as the crafty-yet-gullible Champak and if he were in a graduating class he would pass with flying colours for his nuanced performance. You have seen him in a familiar space before — where he is perfectly pragmatic and vulnerable — but his charm never wears off. His equation with his capricious daughter Taru (Madan) hits all the right buttons. Their chemistry and their sparring leaves you with a warm and fuzzy feeling in your heart.

Speaking of sparring, his mercurial equation with his pesky cousin, played by Deepak Dobriyal, is a treat to watch at first. But their hot and cold relationship gets tiring after a point. While Adajania extracts the best from his actors in terms of performance, the film is too bloated for its own good.

Call it self-indulgence, but the astute director, who has spearheaded films such as ‘Being Cyrus’ and ‘Cocktail’, seems to lose his grip at some point in the film that shows the generational gap between a single dad and his precious daughter. The narrative and the comedy of errors — with two bumbling small-town Indians heading to an English-speaking London — gets tiresome. The tangent where they run into Kareena Kapoor as this hot-headed cop grappling with a troubled relationship with her kooky mother, played by Dimple Kapadia, was an unnecessary twist.

The portions set in the airport where the immigration staff mistakes them for drug dealers and deports them is cheesy and lame. However, seasoned actor Pankaj Tripathi shines in his limited role as a con man with a Middle Eastern accent. The scenes featuring Khan, Dobriyal and Tripathi are pure comic gold. In these grim times of global health scare, this movie is just what the doctor ordered.

But they do overstay their welcome. While the first half is set in Udaipur, the second half is set entirely in London.

Madan’s role as a teenager starts off on a strong note, but falters and isn’t given time to bloom. Precious minutes are wasted in those whacky situations that Champak and his tribe mistakenly enters. It gets tiring after a while.

While the comedy has its shining moments, it’s sporadic. Watch this film if you are keen to watch Khan in top form along with a handful of actors who know their craft. Had the movie shed its proverbial lard, it would have been a cracker of a film.