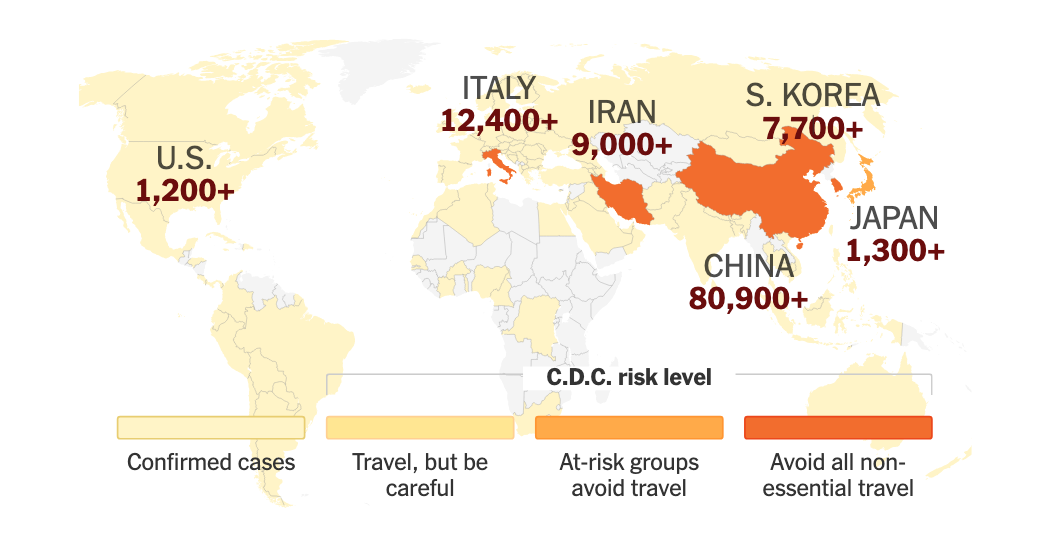 A ‘global pandemic’ that could go two ways

The coronavirus outbreak is not just an epidemic, it’s also a global pandemic, the World Health Organization declared on Wednesday.

The W.H.O. resisted using that term until now, for fear that people would take it to mean the virus was unstoppable and would give up trying to contain it. But the head of the W.H.O. said in Geneva that “all countries can still change the course of this pandemic,” so it’s vital to keep fighting its spread.

You can see why in a chart that has quickly become a defining image of the crisis. It shows two curves for the number of cases over time: A swift, steep peak if no protective measures are taken, and a flatter, more manageable slope if people wash their hands, limit travel and practice “social distancing.”

Flattening the curve with mitigation “reduces the number of cases that are active at any given time, which in turn gives doctors, hospitals, police, schools and vaccine manufacturers time to prepare and respond, without becoming overwhelmed,” Drew Harris, a population health analyst at Thomas Jefferson University, told our colleague Siobhan Roberts.

Dr. Harris added: “Some commentators have argued for getting the outbreak over with quickly. That is a recipe for panic, unnecessary suffering and death. Slowing and spreading out the tidal wave of cases will save lives. Flattening the curve keeps society going.”

The government squandered a chance for early warning of the coronavirus’s spread in the Seattle area after the first U.S. case surfaced in January, our correspondents Sheri Fink and Mike Baker report.

Researchers tracking the flu in the region had collected samples from thousands of people with symptoms — samples that could be screened for the coronavirus as well. But to do that, the researchers needed federal permission, and officials repeatedly turned them down.

After weeks of frustration, the researchers started testing the samples anyway in late February — and one swiftly came back positive. That case — a local teenager with no recent travel history — showed that the virus had already established itself on American soil without anybody knowing it.

Federal officials had said no because the researchers’ lab was not certified for clinical work and the test subjects had not given permission, among other reasons. On Monday night, they ordered the researchers to stop testing their samples.

Hear more: Ms. Fink, who covers global public health for The Times, discusses the story, and the wider consequences of lags and lapses in testing in the U.S., on today’s episode of “The Daily” podcast.

A scramble for action in Washington, D.C.

That was Dr. Anthony S. Fauci, the director of the National Institute of Allergy and Infectious Diseases, warning Congress that the coronavirus would keep spreading rapidly in the United States, which crossed the 1,000-case threshold overnight.

President Trump said he would address the nation on the coronavirus crisis at 9 p.m. Eastern.

Senate and House leaders were racing on Wednesday to put together a bipartisan short-term bill that could be sent to Mr. Trump this week. It would most likely focus on paid leave, enhanced unemployment insurance, food assistance and help for small businesses affected by the outbreak.

Worried about your taxes? The Internal Revenue Service said it was thinking about extending the April 15 deadline for most people to pay their 2019 income tax. (Filing extensions are easy to get, but you usually still have to pay on time, even if you file late.)

Teenagers may be particularly anxious. Explain that anxiety alerts us to potential threats and helps us move toward safety. “Feeling some anxiety,” you might say, “makes sense right now. You’re having the right reaction to the emerging news about the coronavirus.”

Learning doesn’t have to stop when kids are home. Some tips from a school administrator: Stick to their daily routine, including wake-up times; let them pursue topics that interest them; and get outside when you can.

You should know the drill by now. But let’s run it again: Wet your hands. Lather them with soap. Scrub for 20 seconds. Rinse off. Dry with a clean towel. It really is the best way to keep safe, because soap is molecular Kryptonite for viruses.

Per the recommendations of the C.D.C., I’m being more diligent than usual about washing my hands. Another measure that I’ve taken is to carry a stylus that I use for all touch-screen transactions outside my home. When using A.T.M.s, vending machines, and tablets at retailers and coffee shops, I use a stylus instead of my finger.