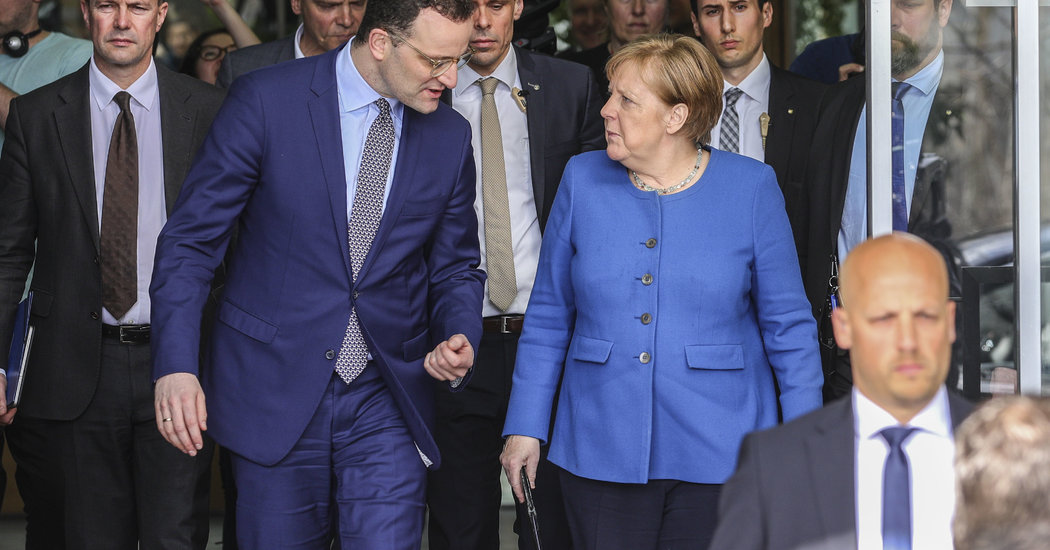 BERLIN — Chancellor Angela Merkel is on her way out and her power is waning, but in her typically low-key, no-nonsense manner, the German leader on Wednesday laid out some cold, hard facts on the coronavirus in a way that few other leaders have.

Two in three Germans may become infected, Ms. Merkel said at a news conference that reverberated far beyond her country. There is no immunity now against the virus and no vaccine yet. It spreads exponentially, and the world now faces a pandemic.

The most important thing, the chancellor said, is to slow down the spread of the coronavirus to win time for people to develop immunity, and to prevent the health care system from becoming overwhelmed.

“We have to understand that many people will be infected,” Ms. Merkel said. “The consensus among experts is that 60 to 70 percent of the population will be infected as long as this remains the situation.”

Ms. Merkel’s estimates were probably a worst-case scenario, though not wildly out of line with those of experts outside Germany.

But her warning provided a stark contrast to the crimped pronouncements of many other world leaders, among them President Trump, who has mostly played down the contagion. “The risk to the American people remains very low,” he said recently.

Mr. Trump has staged photo-ops with scientists at the federal Centers for Disease Control and Prevention, but with this crisis, as with others, he has seemed to pride himself on following his own advice.

“I like this stuff, I really get it,” Mr. Trump said at the C.D.C. “People are surprised that I understand it. Every one of these doctors said, ‘How do you know so much about this?’ Maybe I have a natural ability. Maybe I should have done that instead of running for president.”

Ms. Merkel, by contrast, did in fact spend time studying science before becoming a politician: she is a trained physicist.

On Wednesday, when she addressed her fellow Germans, flanked by the health minister and the head of the public health institute, she took pains to say that the information she was sharing had come from the experts. And that information, she said, informed the public health decisions being made by the authorities.

Lothar Wieler, president of the Robert Koch Institute for public health, said that while health experts currently believe that two-thirds of the population may become infected with the coronavirus, “we don’t know how fast that will happen.”

One of the country’s top virologists recently said that it could take a year or two, or even longer, for that many people to become infected.

At the news conference on Wednesday, Ms. Merkel did not make big promises. Her announcement, sober in tone, was more a call to arms.

The chancellor urged Germans to observe restrictions and stand in solidarity with one another, for the common good.

Soccer games will play to empty stadiums. Big events will be canceled. If need be, Germany will even suspend its cherished balanced budget and borrow more.

“We must take all necessary measures,” Ms. Merkel. “That is true for the government and everyone in a position of political responsibility. But it is also true for all citizens, the 83 million people who live in our country. It is about protecting older people, those with previous illnesses and vulnerable groups.”

“This is putting our solidarity, our common sense and our openheartedness for one another to the test,” she said. “I hope that we will pass it.”

The chancellor has been in regular consultation with her health minister and with German scientists who have been tracking the virus since it first appeared in Bavaria in January.

As the number of infections rose in recent days — they hit 1,600, with three fatalities, on Wednesday — the chancellor came under criticism in the media and from the opposition for not addressing the public about the health crisis.

When Ms. Merkel did so on Wednesday, it was a reminder of the woman who for much of the past 14 years has been the rock in European politics. She is the leader who reassured savings account holders during the financial crisis; who held the euro area together in the sovereign debt crisis; and who was celebrated, at least in many quarters, as the defender of liberal values after her decision to welcome over a million migrants in 2015.

“It was vintage Merkel,” said Andrea Roemmele, a professor of political science at the Hertie School in Berlin. “She showed leadership in a crisis. She reassured people. And she talked facts.

Many, including Ms. Merkel herself, drew parallels to 2008, when markets plummeted following the collapse of Lehman Brothers and a run on banks became a distinctive possibility. At the time, Ms. Merkel stepped before her country and sought to calm frayed nerves.

“We are telling savers that your savings are safe,” she had said at the time.

People believed her. There was no run on the banks.

“What she managed to do is reassure people, avoid a panic, without playing down the crisis,” Ms. Roemmele said.

That appeared to be her aim again on Wednesday.

Ms. Merkel told reporters that she wanted to help people understand the breadth of the challenge posed by the rapidly spreading, still largely unknown virus. And she wanted to make clear that “we are not yet able to offer solutions in all areas.”

The message, she said, was: “We will do what is necessary, together and in a European context.”

Experts on disease modeling said on Wednesday that predicting overall infection rates across a country was an uncertain business, but that estimates in the 60 to 70 percent range were realistic, if perhaps on the high end, for some areas of the world.

“People in my field have been saying for well over a month that 30 to 60 percent of the world’s population will get infected,” said Dr. Elizabeth Halloran, a biostatistician at the Fred Hutchinson Cancer Research Center and the University of Washington.

But she and other experts said that Ms. Merkel’s estimates were most likely at the high end of the range. The real infection rate will depend on whether measures like social distancing and quarantines reduce the spread of the virus, they said.

Alessandro Vespignani, a professor of computer and health sciences at Northeastern University in Boston, has been modeling the social dynamics of infectious disease spread for years and is currently consulting with health official around the world. He believes the two-thirds number is a worst-case scenario.

“I would say it could be closer to 30 to 50 percent attack rate, meaning the fraction of the population infected,” he said. “This is the number you get from looking at when the disease has infected enough people to burn out spontaneously.”

Dr. Vespignani did not, however, rule out a two-thirds rate in some parts of the world, depending on how much time the virus circulates before being somewhat contained.

“Long story short, these are numbers that are part of the possible scenarios,” he said.