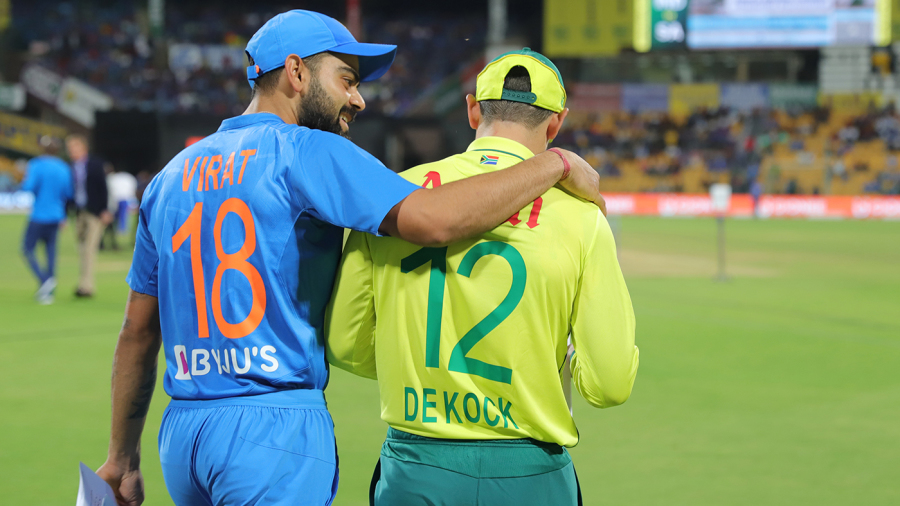 India are back in the comfort of home conditions but they can hardly afford to relax. Not after the drubbing in New Zealand. Given the low temperatures in Dharamsala and the threat of rain looming, India might not yet feel completely at home either.

Even though it’s a year when ODIs are on the backburner to the Test Championship and the T20 World Cup, India have reputations to mend after they went through the shredder in New Zealand.

The returning trio of Shikhar Dhawan, Hardik Pandya, and Bhuvneshwar Kumar elicit curiosity, but they will certainly strengthen the side. Dhawan slots right back at the top, providing much-needed experience there, particularly in the absence of the injured Rohit Sharma. Pandya and Bhuvneshwar’s returns complicate team composition, but it’s a welcome headache to have.

Ravindra Jadeja made himself indispensable as the allrounder in Pandya’s absence, but he was filling in for him, so will he now make way for him? One option India might exercise is to have both Pandya and Jadeja bat in the top seven, thereby giving themselves six frontline bowling options, especially after failing to defend big totals twice in New Zealand. Plus, if Bhuvneshwar slots in at eight, it further lengthens the batting, an incessant bugbear of this team.

For South Africa, the last few months have been a rollercoaster with a management overhaul, a second successive home Test series defeat – albeit a year apart – and subsequent and sudden white-ball resurgence. They surprised India in the T20Is late last year, leveling that series one-each, but will have higher ambitions this time. The return of Faf du Plessis bolsters a young batting line-up that really found its moorings against Australia, but wears an inexperienced look in these conditions. The inexperienced attack led by the in-form Lungi Ngidi might not feel entirely out of depth in Dharamsala where the pitch can assist the quicks and further inspiration can be drawn from the fact that two other teams – England and Sri Lanka – have previously bowled India out cheaply at this venue.

Over the years, India have relied so heavily on their openers that the absence of even one of them has been felt, but not to the extent to which it was felt in New Zealand where both Rohit Sharma and Shikhar Dhawan were out due to injury. The problem was further compounded by the fact that KL Rahul, who has otherwise opened in the absence of one of Sharma or Dhawan, had settled nicely in his middle-order slot, which India did not want to disturb. Openers on tour, Mayank Agarwal and Prithvi Shaw, couldn’t manage a single individual fifty in the three matches, but now with Dhawan back, India can breathe a little easy at the top.

South Africa captain Quinton de Kock had a poor series against Australia but he likes playing against India. In the drawn T20I series against the same opposition late last year, de Kock was the highest run-getter from both teams. He also averages over 63 in away ODIs against India but the last of those appearances where he slammed a hundred came way back in 2015 in Mumbai. Furthermore, the best place to bat in India is against the new ball with the field restrictions in effect, and South Africa will hope that de Kock can fire from the outset.

The returning trio of Dhawan, Bhuvneshwar and Pandya should slot right back into the XI. Manish Pandey, who had a decent game against New Zealand in Mount Maunganui might have to make way for Pandya, while Dhawan comes back at the top for Agarwal and Bhuvneshwar should come in for Shardul Thakur. This will allow India to field four seamers and two spinners.

With uncertainty hanging over Temba Bavuma’s fitness, Janneman Malan, a late addition to the squad, could possibly continue to open alongside de Kock. Middle-order slots will be trickier to fill with the returns of Faf du Plessis and Rassie van der Dussen, who are sure to make the XI. Kyle Verreynne and JJ Smuts who impressed against Australia might be the unlucky omissions to accommodate them, although Smuts can also be picked as an opener. On the bowling front, South Africa will have to make a difficult choice between left-arm seamer Beuran Hendricks and left-arm spinner George Linde, who made his Test debut in India in October, although given the weather that’s been around Dharamsala, they might lean towards the extra seamer for this one.

It’s amazing that there have been six completed internationals in Dharamsala given how much rainfall the region receives throughout the year. The last time these teams were scheduled to play a T20I here in September the game was washed out, and the same result cannot be ruled out with rain predicted on match day. That apart, history suggests Dharamsala is a field-first venue, with teams chasing winning three out of the four ODIs played here. The last time these teams met here in a T20I in 2015, South Africa chased down 200. Faf du Plessis and David Miller from the current squad were part of that XI.