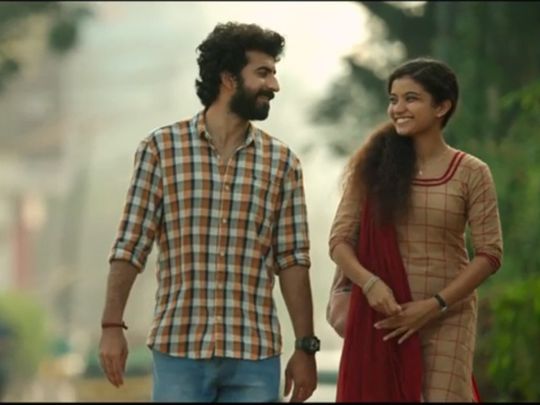 Led by the talented trio — Anna Ben, Roshan Mathews and Sreenath Bhasi — the simple tale of ‘Kappela’ is garnering praise for its performances and screenplay

Siddhartha Siva’s Malayalam film, ‘Ain’ did not get its due. Despite winning the Indian national award and the Kerala state award for Best Feature in 2015, the film failed to get a proper theatrical release. Big budget films boasting of stars elbowed it out.

‘Ain’ (meaning eyes in Arabic) followed the life of a village simpleton Maanu, a laid back young man doing odd jobs, yet loved by many. He happens to witness a murder. And when chased by the goons, Maanu leaves his home in Kerala to escape death.

Actor Musthafa, who played Maanu, was a revelation in ‘Ain,’ (Check it out on YouTube if you love good cinema).

His depiction of this naive man was terrific. Musthafa received special mention by the national jury for his natural performance that made the viewer invest completely in Maanu’s life.

A theatre actor since his young days, Musthafa entered the industry after being spotted in reality show ‘Best Actor’ on Amrita TV. From assisting director Ranjith on two films to taking on supporting roles, Musthafa fulfilled a long nurtured dream to be a director with ‘Kappela.’

Running to packed houses in Kerala, ‘Kappela’ is receiving appreciation for its storytelling and incredible performances by the lead actors.

Musthafa, in an exclusive interview with Gulf News tabloid, talks about his love for acting and the road travelled so far.

‘Kappela’ follows 18 year-old Jessie from Wayanad and her journey. Jessie is in love with Vishnu, an auto driver from Mallapuram.

“This story idea was narrated by my friend Wahid. I worked on it for over two years along with my friends — scriptwriters Nikhil Wahid and Sudhas V. On the whole, ‘Kappela’ talks about our judgement of people based on their external appearances,” said Musthafa.

Ben plays Jessie with Mathews playing her lover Vishnu. What happens when another man (Roy, played by Basi) crosses their path? Bhasi’s Roy is a business administration graduate from Kannur but unemployed.

Working with these talented actors was easy, he added. “I did not have to work much on them. They knew exactly what was expected and delivered twice over.”

‘Kappela’ was filmed in Poovarmala (a virgin mountainous region in Wayanad), Mallapuram and Kannur.

The big hurdle the team overcame was the filming of scenes at Kozhikode bus stand, which is always teeming with people.

“Controlling the mob is impossible here,” remembered Musthafa. “I still can’t believe that we shot there for three days. I was new to direction and so were my assistants. There were long scenes to be worked on but we achieved it smoothly. People were supportive.”

As for the title, ‘Kappela’ means chapel. Musthafa explained that it referred to a dilapidated chapel in the neighbourhood of Jessie’s house.

“This kappela was Jessie’s personal space.”

‘Kappela’ is supported by a cast that includes Sudhi Koppa and Musthafa and is produced by Vishnu Venu. Music is scored by Sushin Shyam and cinematography handled by Jhimsi Khalid.

Three films old, Anna Ben is busy filming her next with director Ranjan Pramod. Her hectic schedule has not allowed her to watch ‘Kappela’ in theatres. However she is overwhelmed with the feedback on social media. Excerpts, from a conversation with Anna Ben.

Jessie is unlike my earlier roles, Baby Mol (‘Kumbalangi Nights’) and Helen (‘Helen’). She is an 18-year old, naive girl from a village that is not much developed. Her family is conservative, one that protects their children from the outside world. It’s not the family’s fault, because they think it’s the best for their children. Jessie is neither exposed nor familiar with the outside world. ‘Kappela’ talks about her journey in the outside world, her experiences in real life and how she realises many things about her that helps her find strength in becoming bold and independent. She is a sweet and innocent character and a different role to explore. I went back to my school days and recalled some of the innocent and straight forward girls I knew.

I have known Musthafa as an actor and admire his work. With ‘Kappela’, he earned his place as a good director. Being an actor himself he gave us enough space. We had discussions on how to get into our characters. There was a lot of give and take. The plot is simple and has been talked about in other films but the way Musthafa has captured and treated it is different. ‘Kappela’ is neat with the right balance of thrills.

Roshan Mathews on his film

Vishnu is an auto driver from a small town of Mallapuram. He is extremely social, easy to be around but is not in for a permanent life anywhere. He likes his world to keep changing and jumps from one place to another.

On working with Musthafa

Musthafa has stayed honest to the story without making any compromise to ensure a certain commercial response to the film. Yet he figured out an entertaining way to do so, without going for formulas. I liked his choice of story. He is a good actor himself. While giving us the briefs, he lets us go first and only when he wants changes made he will tell us. He never lets an opportunity go and pushes our strengths. Without actually demonstrating what he wants, he points out to an opportunity that we actors can play with for our characters.