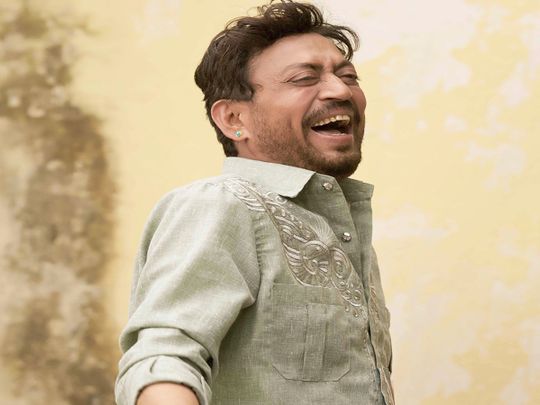 Indian National Award-winning actor Irrfan Khan spent most of 2019 and the year before battling a near-fatal brain tumour in London, but he had an iconic Hindi song that kept playing in his head. In more ways than one, those verses defined that grim period in his life that sprang out of nowhere.

“I tell life: ‘Lag Jaa Gale Ki Phir Yeh Haseen Shaam Ho Naa Ho, Shayad Is Janam Mein Mulaqaat Ho Na Ho [Embrace and hug me life, for your never know if we will ever have this magical evening like this or not, Perhaps we may meet or never meet again in my lifetime],” said Khan in an exclusive email interview with Gulf News tabloid.

Khan, 52, was alluding to the iconic romantic song sung by Lata Mangeshkar that encapsulates the frailties of life by two lovers and those lines continue to be significant for all those who have lost loved ones or courted death.

Incidentally, his choice of words — tinged in sorrow and hope — was an apt choice for this actor who was diagnosed with a high-grade neuroendocrine tumour in March 2018, something that the actor himself took to Twitter to inform his fans. But he embarks on a new chapter in his career this week.

Khan, who has acted in over 100 films, is back on the big screen on March 12 with ‘Angrezi Medium’, a warm and fuzzy father-daughter tale directed by one of Bollywood’s finest directors Homi Adjania who famously waited for the actor to recover so that he could begin filming.

“My health issues came out of nowhere. Yes, I took a break and yes I am hopeful to come back,” added Khan.

Khan plays a doting father from a small Indian town in ‘Angrezi Medium’, who will go to any lengths to help his ambitious daughter realise her dreams of studying at a prestigious university in the United Kingdom.

The actor may harbour doubts about his appeal and skills, but his army of ardent fans will unflinchingly vouch for his long enduring pull among movie fans.

It’s evident that no actor’s comeback in Bollywood has been as highly anticipated in 2020 as Irfan Khan’s whose credits including a string of visceral and stunning films such as ‘Paan Singh Tomar’, ‘Piku’, ‘Maqbool’ and ‘The Lunchbox’. Khan was last seen in the 2018 slice-of-life road movie ‘Karwaan’, in which the lanky actor steered the narrative forward with his sardonic wit and trademark flamboyance.

As director Adjania — who put his film on hold for 18 months until Khan recovered — puts it, “I was not looking at some finish line, the movie was shot so organically as we took each day as it came. This movie was made with so much love and laughter.”

The two had met in Mumbai back in 2006 during the screening of director Mira Nair’s celebrated feature ‘The Namesake’ that saw Khan in a brilliant form in the role of Ashok, a first generation Indian immigrant in the US. Both spoke about collaborating, but it took them more than a decade to materialise their dream of working together. According to the director, Khan has revealed his most sensitive side as an actor in ‘Angrezi Medium’.

“As an actor, I believe that they draw from their circumstances and what’s happening in their lives and you will find those nuances seeping into their character. The whole experience has made Irrfan a sensitive person and sensitive to what matters really in life which we forget in our regular lives. We often complicate our life with trivial crap and he brings those aspects alive with his role,” said Adjania.

As their latest film ‘Angrezi Medium’, which chronicles a father’s quest to put his daughter through a foreign university, gets ready to release in the UAE, here’s an interview with Khan as we talk about fleeting nature of films, life, fears and unfulfilled dreams…

Tell us about ‘Angrezi Medium’ and your role in the film.

I am the mother and the father of my only daughter. He goes to any extent to fulfil her dreams to study abroad. What he goes through and what all he does is the film’s plot. For me, trying to be a mother in a patriarchal society that he clearly belongs to was the layering that I loved the most. I play a doting father who’s endearing and innocent.

What was the most difficult part of playing the role?

Oscar winning South Korean film ‘Parasite’ talked about class warfare in a grim yet humorous way. Do you think ‘Angrezi Medium’ will also highlight the divide between the have and the have-nots in a witty manner?

They are completely different films and there are thousands of film about poverty. This is not about poverty, it’s about richness in the characters.

I have led a very satisfied life and I’m trying to make it more positive and satisfying now. Though one dream that I harboured was to have a daughter which never got fulfilled.

‘Angrezi Medium’ seems to have a daughter-father dynamic at its core. What are your favourite dad-daughter dramas and why? And why do you thing such genres work so well among movie fans?

I don’t remember having a favourite father-daughter film, but daughters are very special. I don’t have one but I have always craved for one. I dreamt of having one and I am sure that I would have made her feel special and spoilt her. For all the daughters out there, I want say “Tere maathe pe yeh aanchal bahut khubsurat hai lekin tu is aanchal ka parcham bana leti toh aacha tha.” [Your veil looks beautiful on your forehead, but it would have been better had you turned it into a flag].

“Inside I am very emotional, outside I am very happy” was one of your posts on Twitter as you unveiled the trailer of ‘Angrezi Medium’. Can you please elaborate?

It was the writer’s way of saying he is breaking into pieces because his daughter will leave him and go abroad to study. But on the outside he is proud that his daughter got through the exams and is venturing out on her own.

What would you want the audience to take away from this film and is there a next instalment in store for us?

The audience should let daughters fly. Just be happy and do what they want to do. Regarding a second instalment, Dinoo [producer] is the person to ask about franchises.

What is your equation with other actors in ‘Angrezi Medium’ including Radhika Madan, Deepak Dobriyal and Kareena Kapoor Khan?

Kareena is a superb actor and she still might not know her potential. Radhika is budding and she will bloom into a great actor, while Deepak is my buddy in acting and I love our jugalbandi (interaction).

What is your biggest strength and fear as an actor and a human being?

My biggest strength as a human being is that I know how to be curious and wondrous all the time. My biggest fear is that I should never succumb to any fear.

‘Angrezi Medium’ is out in the UAE cinemas on March 12.

“I don’t feel any pressure to present Irrfan as an actor… Irrfan and I wanted to collaborate for the longest time since ‘The Namesake’ screening and if you look at the world today, it’s time to chill out and make people laugh. This movie embodies what love is all about… With all that’s going around the world today, we need a film that make you laugh from your bellies and not your throat. There’s a beautiful soul to ‘Angrezi Medium’,” said Homi Adjania

Irrfan Khan and director Homi Adjania spent considerable time together in London during summer where Khan was being treated for neuroendocrine tumour.

“We used to hang out and chat about everything about the film. Irrfan is such a beautiful human being, very sensitive and aware. And, I can’t wait for those qualities to come into the film too. I have never seen Irrfan like this before in any film,” said Adjania.