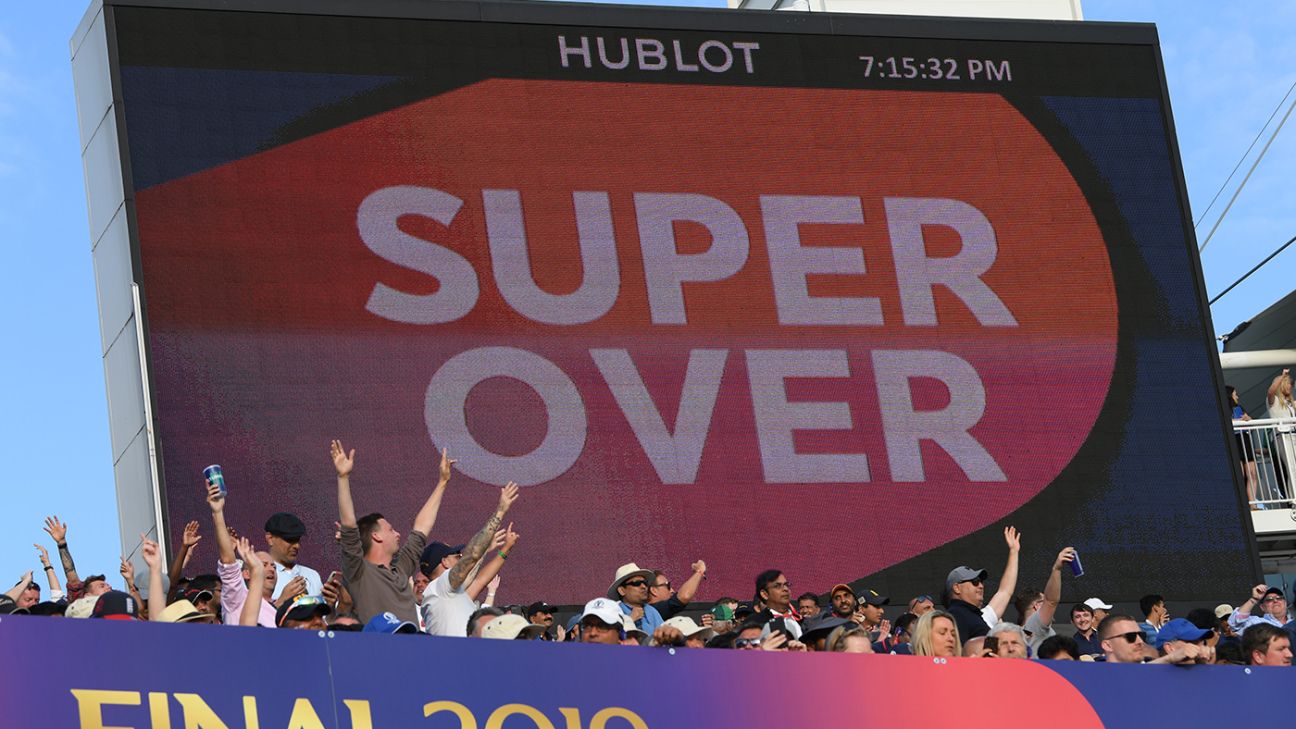 Tied matches in the Hundred will not go to a five-ball Super Over unless Duckworth/Lewis/Stern has been used and the game is a knockout fixture, according to a draft set of playing conditions published on the ECB’s website.

While some of the new competition’s regulations had been revealed in December, the draft playing conditions, dated March 3, include several notable additions:

The draft playing conditions, which are subject to change, consistently make reference to ‘overs’ rather than ‘splits’ or ‘ends’, but clarify that they will last five balls rather than six. Two overs will be bowled from each end alternately, and a bowler shall be allowed to change ends as often as desired, bowling a maximum of two overs consecutively.

Those regulations appear to encourage specialism at certain phases of the game: a team’s best new-ball or death bowler would be permitted to bowl 20 of the first or last 25 balls of an innings, for example.

In group-stage matches, tied games will not go to a Super Over, and wickets lost will be irrelevant: each team will be awarded one point.

In the two knockout games – the eliminator/semi-final between the teams finishing second and third in the group, followed by the final – wickets lost will be the decider in the event of a tie. If teams have lost the same number of wickets, then it will be the team with the highest score after 30 balls that wins, then 25 balls, and so on.

If the Duckworth/Lewis/Stern method has been used in a tied knockout game, then a ‘Super Five’ will be played – effectively a five-ball Super Over. If the Super Five is tied, then the team with the higher score after four balls, three balls and so on will be declared the winner. If it is not possible to complete a Super Five due to the weather, a bowl-out will be used, potentially to be held indoors.

The minimum number of balls needed for a game will be 25, as confirmed in December. The Duckworth/Lewis/Stern method will be used to calculated revised targets.

There is a reserve day for Finals Day, but not for group games. A bowl-out will be used if it is not possible to bowl at least 25 balls per side in a knockout game.

The fielding restrictions are primarily the same as in the T20 Blast, with a maximum of two fielders outside the 30-yard circle in the 25-ball powerplay, and five outside thereafter.

A maximum of five fielders will be permitted on the leg side at any time.

The captain of the fielding team can call a 150-second ‘strategy break’ at any point when the ball is dead, including part-way through an over, outside of the 25-ball powerplay.

It is not mandatory to take a strategy break. The fielding captain will make a ‘T’ sign at chest height to call for one.

65 minutes has been allocated for each innings, separated by an interval of 15 minutes to give a total of 2 hours, 25 minutes per match.

DRS will be in operation for all men’s fixtures and all televised women’s fixtures. Both teams will be allocated one review per innings, and DRS’s operation is in line with international level.

The umpire will cross their hands above their head to signal that a bowler will bowl consecutive overs.