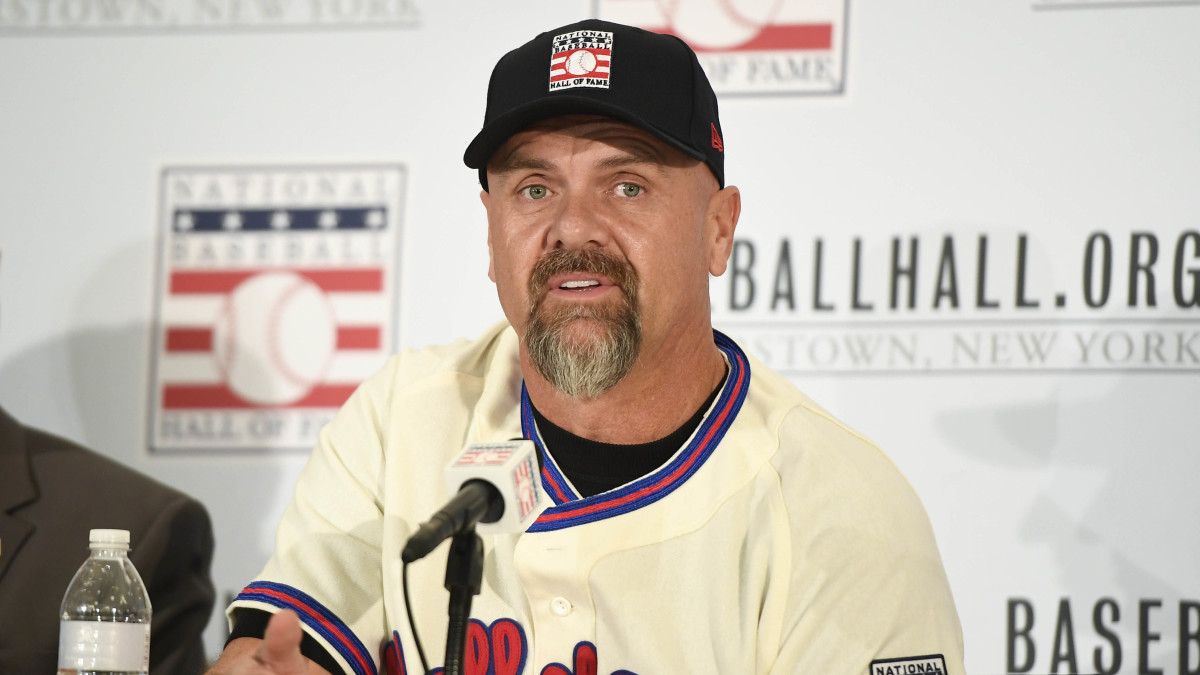 The emergency backup goalie is a big topic in the NHL these days and the Avalanche are about to employ the most famous one yet.

For Saturday’s game against the Golden Knights, the Avalanche will celebrate newly elected Baseball Hall of Famer Larry Walker by having him serve as the honorary emergency backup goalie.

After Zamboni driver David Ayres was pressed into action for the Hurricanes against the Maple Leafs last month, NHL general managers discussed amending the procedure that results once or twice per year in an average Joe being pulled out of the stands to sit on the bench, or even see ice time.

But the system remains in place, and so Walker can live out his dream of playing for an NHL team (sort of).

Before he became one of the greatest hitters in MLB history, Walker dreamed as a kid growing up in British Columbia of being an NHL goaltender. He told Sports Illustrated in 1993 that he once traveled 15 hours to Saskatchewan for a tryout with a junior team. He didn’t make it. He went back the next year and didn’t make the team that time, either.

Baseball was Walker’s backup plan. It worked out fine.

Rob Gronkowski’s larger-than-life personality always seemed more apt for a wrestling ring than a football field and now that may be coming to fruition.

Ryan Satin reported late last night on FS1’s WWE Backstage that Gronk is nearing a deal with WWE and could be appearing on the March 20 edition of SmackDown.

Gronk has appeared for WWE before, helping his friend Mojo Rawley (Dean Muhtadi) win a match at WrestleMania 33 in 2017, and has remained on WWE’s radar.

“Gronk has mentioned WWE before, that he loves it and said had so much fun doing it,” WWE executive Paul “Triple H” Levesque told SI.com last year, right before Gronk’s final NFL game. “I don’t know if it’s something he’d be seriously interested in, but that’s how the conversation started with Ronda Rousey, too. Certainly the door is open for him at WWE.”

It’s difficult to imagine Gronk, who retired from football for health reasons, subjecting his body to the punishment of a full-time wrestling schedule but he definitely has something to offer the company as a special attraction.

Tom Verducci wrote about Shohei Ohtani for the MLB preview issue of the magazine. … Dayton’s Obi Toppin is quickly becoming the NBA draft prospect to watch during March Madness. … In hoping to win the equal pay lawsuit brought by the women’s national team, US Soccer resorted to denigrating the women.

Ravens tight end Hayden Hurst was scammed by a man posing as former Giants pitcher Tim Lincecum. … SB Nation’s Banner Society catalogued, mapped and analyzed every college mascot in America. … 2K has regained its license to make NFL games, but it can’t make a Madden competitor. … ESPN’s wild plan to acquire Al Michaels via trade has (predictably) failed. … The coronavirus has forced the cancellation of Japan’s famous Koshien high school baseball tournament for the first time in its 96-year history.

Great performances all around

I will watch any Russell Westbrook highlight

This guy is navigating the recruiting process the right way

A Russian singer fell 10 feet off stage, broke her foot and kept on singing. … Led Zeppelin won a lawsuit affirming it did not steal the guitar riff in “Stairway to Heaven.” … A new species of chlamydia was discovered under the Arctic Ocean.

A game about nothing

Such commitment to the bit