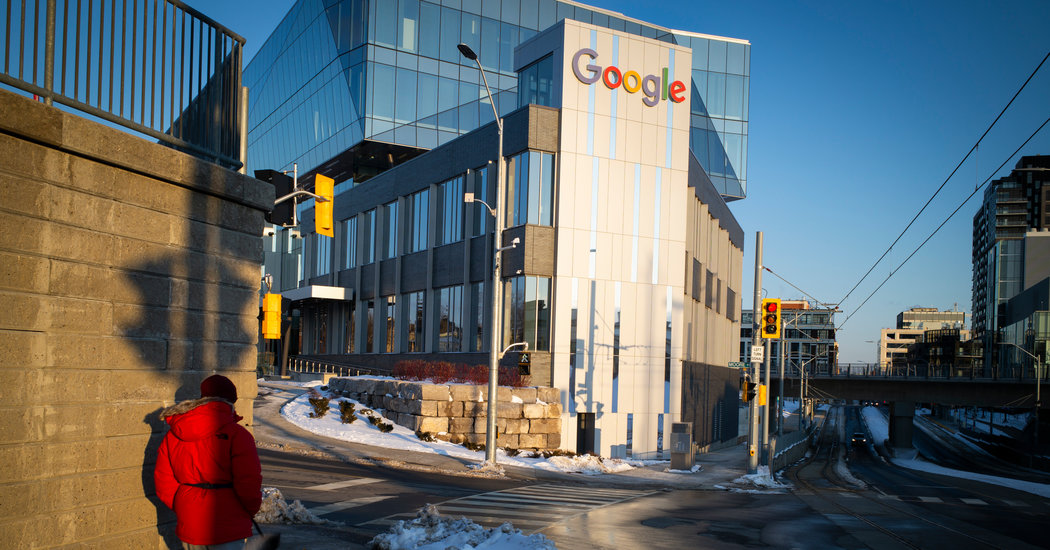 TORONTO — The announcement was big enough for Prime Minister Justin Trudeau to fly down to Toronto and deliver. A corporate sibling of Google had been selected to transform a largely abandoned port area in Toronto into an innovative, sensor-laden, tech-centric city of tomorrow.

But almost from the time of its unveiling, the project — which combined environmentally advanced construction with a plan for sensors to track residents’ movements and actions — was hit by formidable opposition. Critics cast it as a recipe for a surveillance-driven, corporate controlled urban dystopia, and objected to turning over public spaces to one of the world’s wealthiest corporations.

Now, nearly two and a half years later, the opponents have shown that even if you can’t fight city hall, you can take on Google and succeed.

After admitting that it had underestimated privacy worries with its original plan, the Google sibling, Sidewalk Labs, has retreated. A couple of weeks ago, it unveiled details of a much watered-down plan along with new privacy protections. But some critics remain unconvinced. Waterfront Toronto, a government agency, will announce in May if the project will proceed.

“This thing has blown up on them,” said one of the plan’s leading critics, Jim Balsillie, who as a co-chief executive of Research in Motion, helped make the BlackBerry the world’s first successful smartphone and himself into one of Canada’s biggest names in tech. “I smoked them out. They were playing us like a bunch of colonial supplicants and suckers.”

The story of how Toronto walked back the Google plan is in part a tale of locals taking on a big company. But it also reflects a growing pushback around the world against big tech that has accelerated since Sidewalk Labs unveiled its proposal.

“I think there’s been a significant shift in attitudes and public understanding of what’s at stake and the issues with these tech giants,” said Andrew Clement, professor emeritus at the University of Toronto’s faculty of information who studies digital surveillance and infrastructure.

“To let in an enormous company that I would say has not shown much respect for governmental institutions even in the United States, one that has a rather expansive vision of its role as a political and economic actor, strikes me as a kind of Faustian bargain,” he said.

The message of Mr. Balsillie and other prominent critics is blunt: Foreign tech investment in Canada ultimately sucks knowledge out of the country creating a net drain on the economy, they argued. Mr. Balsillie described Sidewalk’s Toronto plan as a move by Google to use data from people’s lives in the physical world in the same way it now exploits their online lives — an assertion that Sidewalk vigorously denies.

The project, known as Quayside, came about when Waterfront Toronto set up a competition in 2017 to redevelop a 12-acre parcel of Toronto’s formerly industrial shoreline along Lake Ontario.

Long abandoned, the land features an old grain elevator, a gravel parking lot and an emergency shelter for the homeless. But it sits beside a potentially enormous development prize: 800 acres mostly owned by the federal government, and the largest undeveloped tract in downtown Toronto.

Sidewalk, founded by Google in 2015 to develop technologies to improve urban life, won the first round of the contest. Its idea was to create a so-called “city of the future” that would marry technological innovation to shape urban planning and design.

High-rises made from engineered wood would replace weed lots and underused warehouses along streets. Bike paths would melt snow. Giant awnings would shelter pedestrians from rain or blazing summer sun. Sensors would track residents’ every movement to optimize everything from traffic signals to underground armies of robots delivering parcels and discarding trash.

And all of it would meet ambitious environmental standards.

Critics pounced. How would Sidewalk use the data it gathered from the streets, washrooms and even the garbage bins, they asked. Who would own the data? How would it be stored?

Several people, including Mr. Balsillie, rejected Sidewalk’s fundamental premise that algorithms, rather than politics, are the best way to design and run a city. And some argued that the project appeared to be a means of promoting concepts such as self-driving cars and other interests of Google, which like Sidewalk is a subsidiary of Alphabet.

“This is about corporate capture of governance and privatizing governments,” said Bianca Wylie, who has long pushed for citizen access to data and who co-founded Stop Sidewalk, the largest group opposing the plan.

Sidewalk, she said, has “wonderfully intelligent people working there and they care about cities.” But, she added, “The problem is that nobody gets to buy democracy and governance.”

Mr. Balsillie took an unlikely leading role in the opposition, appearing regularly on television and radio, writing newspaper op-eds and consulting with the Canadian government on the project.

Dan Doctoroff, Sidewalk’s chief executive, makes little effort to hide his irritation when presented with Mr. Balsillie’s oft-repeated argument that the project was a back door for Google to use data from the physical world in the way it uses online data.

“That is completely untrue,” Mr. Doctoroff said. “He has never uncovered a shred of evidence of that being the case. And so I think that allegation is irresponsible. We have always said that there is no connection to Google.”

The low point for Sidewalk came last June when it released thousands of pages of its master development plan, blindsiding many people in Toronto with a more expansive vision than originally proposed.

Instead of a 12-acre project, the master plan covered the full 800 acres adjacent to the original parcel. Sidewalk proposed receiving a cut of future property taxes from the neighborhood in exchange for building a rail transit line there. That funding idea was ultimately withdrawn.

While Mr. Doctoroff said Waterfront Toronto had requested a broader vision, he acknowledged that Sidewalk had overreached.

“It was just too big certainly until we have proven ourselves at a smaller scale,” he said. “But while we still have negotiations to come, we believe that a large percentage of what we hoped to do will still be possible.”

But after strong public blowback, the plan is back to 12 acres. The super awnings are gone. The self-heating paving stones that were to be used to create snow-melting bike lanes may also be abandoned, a spokeswoman acknowledged, given that any route will run only for a couple of blocks.

The trash robots? They may not be possible with the smaller scale. The huge engineered wood beams will still be used but originally they were to come from a factory that Sidewalk would help establish, an investment that the scaled-down project cannot justify on its own.

After negotiations, Sidewalk proposed that Waterfront Toronto itself set the rules covering data use and that the information be stored in an open “data trust” managed by the agency.

But the company has yet to persuade a variety of critics that the revised proposal imposes acceptable limits on the use of the information, or even the need to gather it.

Last month a panel of technology experts assembled by Waterfront Toronto, including Professor Clement, released a report on Sidewalk’s proposal questioning “whether sufficient benefits had been identified to justify the proposed collection or use of data.”

The group also raised concerns about the rules surrounding data ownership and use, and about “the accountability” of Sidewalk, given that it has Alphabet’s resources behind it.

Still Sidewalk does have many boosters, including Richard Florida, an urban studies professor at the University of Toronto’s Rotman School of Business.

“I think they made the project better,” said Professor Florida, who acknowledged that he had done some work for a company that is advising Sidewalk. “When I go to American cities people go crazy on me and say: ‘Please bring it here, can we please have it here?’”

But Mr. Balsillie hopes the city rejects even the mini-version of Sidewalk’s urban future.

“It’s a mangled and failing project, it’s 90 percent dead,” he said. “What I’ve called for is to restart it and do it right.”