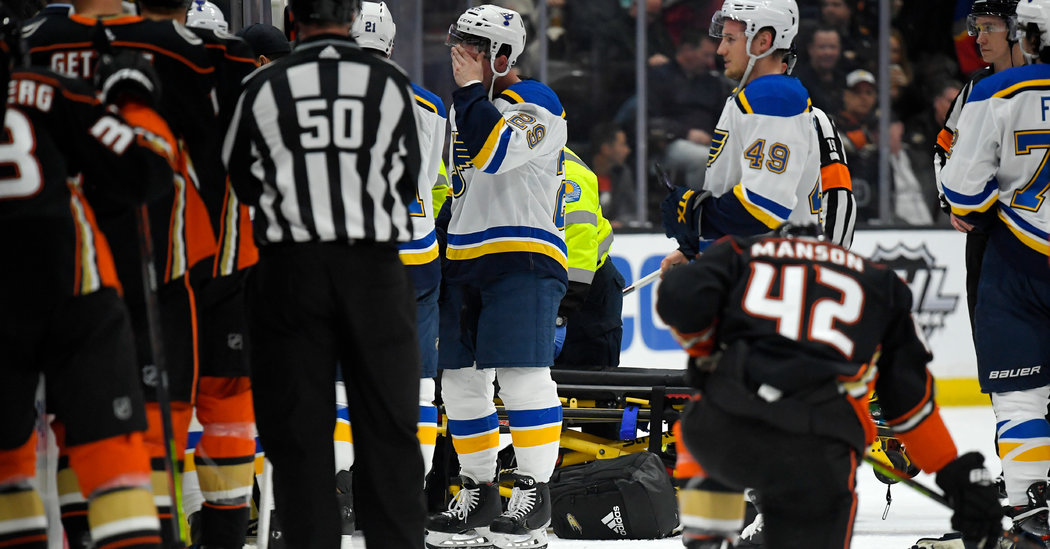 It has been a month since the St. Louis Blues got the rallying moment no team needs.

During the first period of their Feb. 11 game against the Anaheim Ducks, Blues defenseman Jay Bouwmeester went into cardiac arrest and collapsed on the bench just after finishing a shift. Players from both teams helped hoist the bench out of the way so that emergency medical workers could reach the 36-year-old defenseman.

“Everybody had to move aside, they were trying to get the E.M.T. in there. I saw them pressing his chest,” said Darren Pang, a TV broadcaster for Blues games, who was standing between the teams’ benches when Bouwmeester went down.

Bouwmeester spent several nights in a California hospital and had a surgery to implant a defibrillator days later as his teammates left for their next game in Las Vegas. In the aftermath of Bouwmeester’s collapse, the Blues lost three straight games including two on the road.

“We were all emotionally drained from that. It was hard to focus on games,’’ said Ryan O’Reilly, a center on the team. “You’re facing your mortality and it’s tough when that happens.”

Despite the jarring scene, the Blues have lately rallied around Bouwmeester, who is recovering back home in St. Louis and has been a consistent presence at practices in recent weeks. “He visits us almost every day. It’s routine for him and it’s what he does because he’s been doing it for so long,’’ said Alex Pietrangelo, the Blues captain. “When you see a friend — a close friend for a lot of us — go through that, I guess without even realizing, it rallies everyone together.”

On Wednesday, St. Louis expects to play a game in Anaheim for the first time since Bouwmeester’s collapse. “I can’t imagine they will go back there and just be a hockey team. They have to sit on the same bench where they saw a man nearly die,’’ Pang said. “I’ll never go into the Honda Center again not thinking about that moment.”

With Bouwmeester out, the Blues have held ground in the battle with the Colorado Avalanche in the Central Division, where St. Louis holds a two-point lead through Monday’s games. The team had reeled off eight straight wins before losing to the Devils, 5-2, in Newark on Friday night. The Blues currently lead the Western Conference with 92 points.

The streak called to mind the resolve the team showed last season during an unexpected rise in the standings, from being last in the league as late as Jan. 3, 2019 to winning the first championship in the franchise’s 52-year history.

Picked third overall by the Florida Panthers in the 2002 draft, Bouwmeester had been known for his steadfast attendance. During a 10-year stretch, he played in 737 straight games, the ninth-longest consecutive games streak in N.H.L. history. Bouwmeester had not won a playoff series until the 2015-16 season, when the Blues reached the Western Conference Finals. He had played 1,184 regular season games over 16 N.H.L. seasons when St. Louis won the Cup, his first, last spring.

N.H.L. commissioner Gary Bettman handed the trophy first to Pietrangelo who then passed it to Bouwmeester, the team’s longest tenured player without a championship, as is tradition.

“He’s been a mentor for me since he came here so my first thought was to get it to Bo because he’s been waiting a lot longer than I have,’’ Pietrangelo said. “To see the joy that it brought him was very special to me. And he just said ‘thanks,’ which is typical Bo.”

The affable and soft-spoken Bouwmeester had been a quiet leader for the team. O’Reilly, who joined the Blues in a trade from Buffalo before last season and won the Conn Smythe Trophy, awarded to the most valuable player of the playoffs, said he and many others on the Blues roster look up to the veteran.

“He doesn’t say much but when he does everyone listens,” O’Reilly said. “Jay would always say the right thing and you know he’s bang on, that intelligent mind. It was definitely really hard not seeing him around the team. But then he’s at the rink again, you see him and that really puts you at ease, that he’s going to be OK.”

Now Bouwmeester serves in a different role, as a motivational point of focus for St. Louis during the team’s attempt to repeat as N.H.L. champions.

“We lost a great player that’s been in this organization for a long time, a great team guy and a great person off the ice,” Blues coach Craig Berube said. “We were really devastated when that happened, and it took a little time to recover. But once Bo was around and better and we knew he was going to be OK, it really brought some life back to our team.”

As the postseason comes into view, the pressure to defend their title will only intensify.

“It doesn’t surprise me they are playing this way,’’ Pang said. “There’s no doubt in my mind that they want to raise that Cup and they want to hand it to Jay Bouwmeester.”