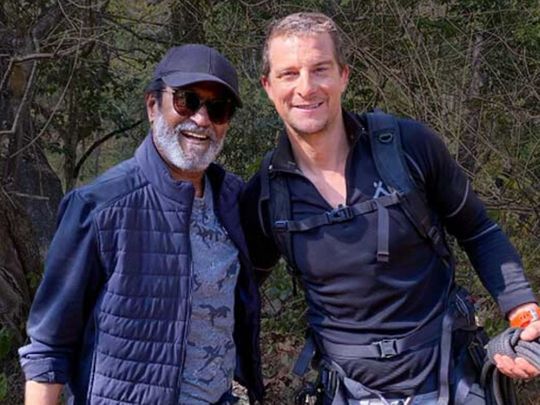 Are you in the mood to watch South Indian superstar Rajinikanth, known for his acting histrionics, flip his sunglass in the wild as he embarks on an epic survival adventure?

Your wait is almost over. On March 23 at 8pm, Rajinikanth will make his TV debut on Discovery Channel with adventure survivalist Bear Grylls and a minute-long teaser of the episode being aired on ‘Into The Wild With Bear Brylls’ is already doing the rounds on the social media.

Rajinikanth is the second Indian personality after Indian Prime Minister Narendra Modi to appear on Gryll’s popular segment where he takes along world-famous personalities into a forest and throws them in the deep end to survive.

“He has faced a lot of fears, but he never gives up and he’s relentlessly positive,” declares Gryll in the 60-second promo.

As always, the TV show opens with ‘Superstar Rajinikanth’ emblazoned as the title just like how he is introduced in his films and the superstar is even seen asking Gryll whether he should climb a tree. He seems to be an absolute sport as he executes fist pumps after he tackles nature at its bestial best. Rajinikanth is also seen wading into a pond with a tiger behind him along with walking precariously on a bridge.

“This is a real adventure,” added Rajinikanth with his trademark laugh. The promo, which has clocked a whopping 377,000 views within 24 hours of its upload, was shot in Karnataka’s Bandipur Tiger Reserve.

During the filming, there were reports that Rajinikanth was injured but the actor’s team denied it.

After Rajinikanth, it will be the turn of Bollywood actor Akshay Kumar to survive the wild with Bear Grylls.