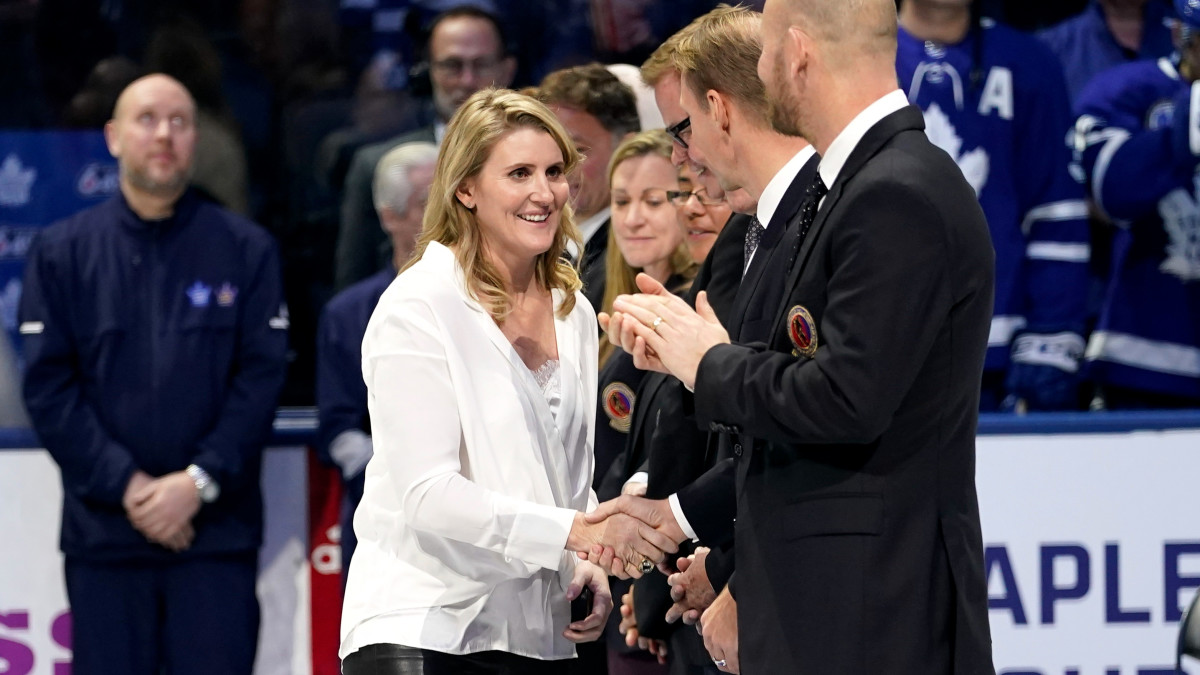 Each summer at the draft, the NHL Coaches’ Association holds a global coaches clinic and when NHLCA president Lindsay Artkin gazes out upon the throngs, she notices a disparity.

That obviously does not reflect the population as a whole and it certainly doesn’t represent the percentage of women in the hockey community, either. So the NHLCA began to think about options.

The first initiative was officially announced on International Women’s Day this past weekend: the launch of the NHLCA Female Coaches Development Program, which aims to help women with whistles in a variety of areas including skills development, leadership strategies and communication techniques – not to mention valuable networking and career advice.

The NHLCA represents head coaches (St. Louis’ Craig Berube is the president of the executive committee), associate coaches, assistant coaches, goalie coaches and video coaches in the league and right now, the group has no women members. The closest NHL representatives would be skating coaches such as Dawn Braid and Barb Underhill (who don’t exclusively work for one NHL franchise) or player development experts like Hayley Wickenheiser with the Toronto Maple Leafs.

What the NHLCA does have, according to Artkin, is a database featuring hundreds of women coaches who could potentially change that goose egg some day.

In other sports, the barrier has already been broken – Becky Hammon is in her sixth season as an assistant coach with the NBA’s San Antonio Spurs, for example, while the NFL has seen a number of women earn positions – including Katie Sowers, who just went to the Super Bowl with the San Francisco 49ers.

At the junior level, the Moose Jaw Warriors brought on what is believed to be the first-ever female coach in the WHL this season when they hired former NCAA Clarkson star Olivia Howe to be a coaching assistant with the team.

So progress is coming, albeit slowly. The upshot of including women in the hiring pool should be obvious – new perspectives, new opinions make for better discourse and given how stale the NHL coaching pool has been in recent years, any development that brings in new blood should be welcome. Imagine, for instance, being in a different super-competitive industry and throwing out half the intellectual talent pool before you even started your hiring process.

In general, the NHLCA’s mandate is to develop all kinds of coaches, but this particular initiative aims at opening up more than just a few job opportunities.

“Female coaches are a critical component of supporting the growth of hockey at the grassroots level,” Artkin said. “And it is essential to the game to diversify the current pool of hockey coaches. We intend for this program to be an impactful step forward in doing so.”

The new program aims to get participation from all 31 NHL franchises, though Artkin notes that some teams already have diversity initiatives that may take precedent in terms of resources. In the first year of the program – which will begin at the NHLCA’s draft conference in Montreal – the NHLCA will pick 50 women, hopefully from a wide geographic range, for the program, which will also include job shadowing events led by NHL coaches and mentorship. If all goes well, the program could be expanded to include more women the year after that.

“Our research suggests there are three critical elements to accelerating the growth of girls hockey: access to inclusive programming in early childhood, casual and aspirational pathways in hockey development, and quality female coaching and role models along that journey,” said Kim Davis, NHL executive VP of Social Impact, Growth Initiatives and Legislative Affairs. “We can close the gender gap in hockey with the right partnerships and strategies, and this program is advancing equity in a way that will produce dividends for the sport long-term.”

And if NHL teams begin to hire women for their coaching staffs in the short-term, that would be even better.

***
More from The Hockey News:
*Why Are the Canadiens Allowing Cole Caufield to Decide His Future?
*Help—and a Reason for Optimism—Is on the Way for the Kings
*Nine Best Rookie Goalies in the NHL This Season