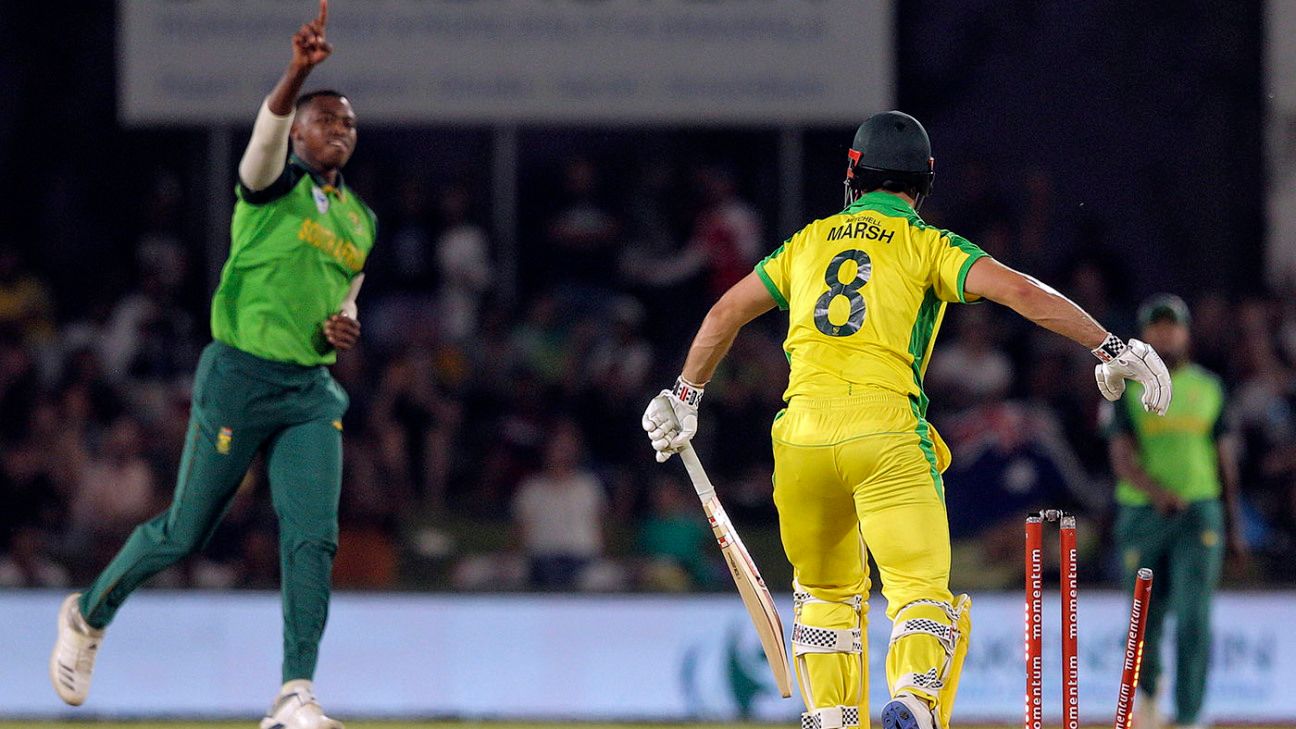 Australia’s ODI side returns home from a series whitewash in South Africa for a three-match series against New Zealand. While Australia’s T20I team has won their last four series as they build towards the T20 World Cup in October, the ODI team has lost seven of their last eight ODIs dating back to the 2019 50-over World Cup where they lost the semi-final to England. Coach Justin Langer has conceded T20 has been the priority but there are some broader questions to answer for both white-ball squads moving forward.

Aaron Finch, David Warner and Steven Smith are unequivocally Australia’s best top-three combination in both formats. Langer admitted his senior trio is weary after 12 months of non-stop cricket and that may explain their lean ODI series against South Africa. But more broadly there’s some things to ponder. Since January 2019, Australia’s top three have the highest combined average in ODIs (in a minimum of five matches): 51.64. Australia’s middle-order problems are well known but it’s also causing tempo issues for the top three. They strike at a combined rate of 87.30, compared to India’s 90.70. The top three of the World Cup winners England average 49.73 and strike at 102.25.

There were times during the World Cup where Australia’s top three were too cautious, admitting internally there was a fear of getting out. Warner has played closer to a T20 tempo in India and South Africa this year striking at 110.52 but aside from his exceptional unbeaten century in the first ODI against India in Mumbai, he’s been caught in the ring three times in five innings trying to accelerate in the powerplay. Meanwhile, Smith has averaged 61.42 and struck at 86.69 in Australia’s last eight ODIs with a century and three half-centuries, but the only game Australia won was when he didn’t bat.

By the 2023 World Cup in India, Warner and Finch will both be 36 while Smith will be 34. There is no reason the trio won’t still be Australia’s best top three at that point but finding a consistent tempo and plan for that trio will be essential for Australia’s success.

“Everyone in the world is looking for it,” Langer said after the South Africa series. “It’s a role that’s there for someone to grab hold of. No one at this stage has absolutely secured it, but there’s good opportunities there for someone to do that. It’s really important for us in T20 cricket and one-day cricket.”

Australia need some answers in both formats. While Australia’s top three have had the best average in ODIs since the start of 2019, Nos. 4-7 have the sixth-worst average of 34.77 while striking at 98.28, with 13 players tried in those roles. England average 44.69 and strike at 105.64 with 10 players used. Australia doesn’t have players bashing down the door in those roles.

It is much harder to develop as a middle-order short-form specialist in Australia because the grounds are so much bigger than India and England and the craft requires more than just power-hitting. Australia look set to continue with Marnus Labuschagne at No. 4 although his similarity to Smith can make the pair easier to contain together in the middle overs as both India and South Africa did in the recent series. Alex Carey‘s form and role has changed regularly over the last 12 months and whilst he is settled in the side as the vice-captain, his specific batting role seems anything but.

Glenn Maxwell returning fit and healthy could help but he is not the panacea. Australia needs good players of spin who can power-hit in the last 20 overs. Matthew Wade, Mitchell Marsh, and D’Arcy Short were all tried in the two formats in South Africa. Ashton Turner was given a run in India while it was Marcus Stoinis’ role in the World Cup. But none have bed it down.

Spin to win, but what type of spin?

Australia have identified spin will play a big role in the T20 World Cup and have picked two specialists in Ashton Agar and Adam Zampa and will stick with them in a five-man attack. But they haven’t been prepared to do it in ODI cricket. Bowling spin in ODI cricket is a slightly different challenge. Batsmen aren’t forced to attack as much and can score in a far more risk-free fashion, particularly with only four out in the second powerplay. Australia’s spinners have had a solid economy rate since the start of 2019 in ODIs, but their average of 55.82 is the third-worst behind Pakistan and Sri Lanka, while India and South Africa’s spinners average under 40 at a better economy rate.

Maxwell and Short give spin-bowling all-rounder options but, like the T20 side, Australia may well find a more successful formula with five specialist bowlers including two specialist spinners who can take wickets in the middle overs. Although that would put more pressure on the top six to do the bulk of the batting. Zampa has bowled well in the two recent ODI tours, but Agar is less of a strike force in ODIs taking just two wickets in 28 overs in India and he played just one game in South Africa. Zampa and Nathan Lyon did well in tandem in India last year but weren’t played together at the World Cup and Lyon hasn’t played since.

Variety is the spice of life

Australia’s T20 attack features two right-arm quicks in Pat Cummins and Kane Richardson, one known for pace, accuracy, and extra bounce while the other is a cutters and slower-ball specialist. They have the best left-arm new ball and yorker bowler in the world in Mitchell Starc, a left-arm orthodox and right-arm wristspinner. Glenn Maxwell, when he returns, will offer a right-arm offspin option who can also bowl in the powerplay. But the ODI attack has had less variety and been less consistent in terms of personnel.

For a World Cup in India in 2023 they may need a Kane Richardson-type bowler on holding surfaces rather than the all-out pace and swing Cummins, Starc, and Josh Hazlewood and there will be a need for two spinners as well. Australia’s inability to find answers with the middle-order batting means there is a lack of clarity in the type of allrounder they use and hence the balance of the attack is affected as a result. Experimentation over the next few ODI series will help but they need to give combinations extended runs to find out what works and what doesn’t.