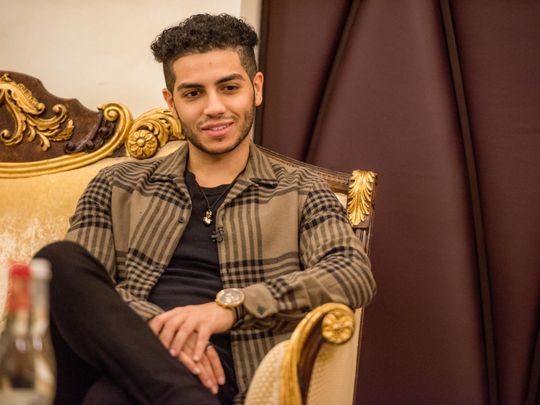 He doesn’t need sunglasses, a baseball cap or an entourage.

Despite starring in a billion dollar blockbuster, life hasn’t changed much for Mena Massoud.

The Egyptian-Canadian actor, 28, broke through on the big screen in last year’s ‘Aladdin’ — Guy Ritchie’s live-action remake co-starring Will Smith.

The film crossed $1billion at the box office, making it one of the most successful movies of 2019.

And yet, Massoud finds his life to be strikingly similar to what it was before becoming a Disney heartthrob. And, he’s been vocal about the lack of auditions for Arab actors — even with films like Aladdin under their belt.

“When I started 10 years ago, my first professional union job was Al Qaeda No 2, and I had two lines. So, it’s gotten better,” said Massoud at the Middle East Film and Comic Con on March 6.

“But, if you take a look at the African-American community, for example, they’ve been fighting for their place in Hollywood for decades. Only now are they really starting to take off.”

“I’m trying to be a voice for the North African Arab community,” he added. “We’ve got to continue to fight for our place in the industry.”

(He also called for more representation behind the scenes, saying: “While it’s great for [actors like] Rami Malek, Rami Youssef and I, we need more Sam Esmails in the world,” referring to the Egyptian-American producer, and creator of hit TV series ‘Mr Robot’.)

In his latest role, Massoud plays a special assistant to the late controversial political figure Rob Ford in ‘Run This Town’, co-starring Nina Dobrev and Ben Platt, out now in North America.

In a candid interview on the sidelines of MEFCC, Massoud opened up about 9/11’s impact on Arab actors, how he hasn’t got a call about ‘Aladdin 2’ and why he thinks the Toronto Raptors might be on their way to another championship.

The last time we spoke was in Amman, Jordan, before ‘Aladdin’ came out. Has life been the same for you since then? Can you still go into Starbucks?

I’m pretty good at going incognito. Honestly, not much has changed. I gotta be honest with you. Same old, same hustle, same grind. I think I was even surprised by how little it’s changed.

We recently heard that ‘Aladdin 2’ was a go. What was your reaction to that?

I hope so. I mean, no one’s formally spoken to me about it. I actually had a friend send me the article. That’s how I found out. So I’m hearing everything for the first time, like everyone else. I hope they, you know, write the script and do a good job and see what happens.

Would you be in for that?

I want to talk a little bit about the landscape for Arab actors in Hollywood, because you have spoken about the struggle to get booked for roles even after being in a huge production. Is that still the case?

Yeah, I think so. I grew up in Canada and I was 10 years old when 9/11 happened. And I think that really changed the landscape for Arabs around the world, obviously, but especially Arab actors, I think we started getting viewed a little different. Like, my whole experience just as a kid before 9/11 and after 9/11 was drastically different. So, that’s definitely made things more difficult.

You have ‘Run This Town’ coming out, with Nina Dobrev, who went to the same university as you, and Ben Platt. What was the experience of filming with them and making that movie?

It was great. You know, I barely got to work with Ben, because we basically lead two separate storylines, really, in the film. But I got to work with Nina a lot. We really bonded and I was excited to work with her, because she’s a pretty famous Canadian actress and I hadn’t worked with her before. That was a lot of fun.

Tell us a little bit about your role in ‘Run This Town’.

I play Kamal, and he basically is the righthand man to Rob Ford, who this film kind of revolves around. And Kamal runs his life, his day-to-day, protects him from media outlets and runs his whole life. I think it’s a good narrative on the millennial experience, the immigrant experience; the character I play is an immigrant, he takes care of his grandmother. I think it’s got a lot of really relevant thematic messages to portray.

Do you think it’s tough to get Canadian stories noticed?

Yeah, yeah, yeah, I think so. Canada’s a small market. I think sometimes we do too much of supporting American stories in Hollywood and not enough supporting our own. I think it’s a little difficult to get Canadian stories out there.

You’re in Dubai now. Are you going to be heading out, exploring?

I’m here for like, two days for the convention and then I’m headed out. I’ll definitely have to come back and get through the city.

Going forward, what are you working on? Are there any dream roles that are on your list?

Right now, I’m just trying to figure out my next job. You know, beggars can’t be choosers, is what they say. I’m open to anything and everything. I started my production company, we’re trying to produce a few things and get that off the ground. It’s a pretty wide open landscape, and I’ve probably got a book tour coming up from my book [‘Evolving Vegan’], that’s coming out in September. You know, things here and there.

Completely off topic, but how did you feel about the Toronto Raptors win and this season?

[laughs] Ecstatic! I’m sad Kawhi Leonard left, but we’re doing well this season without him, so hopefully we’ll make it back to the finals again.