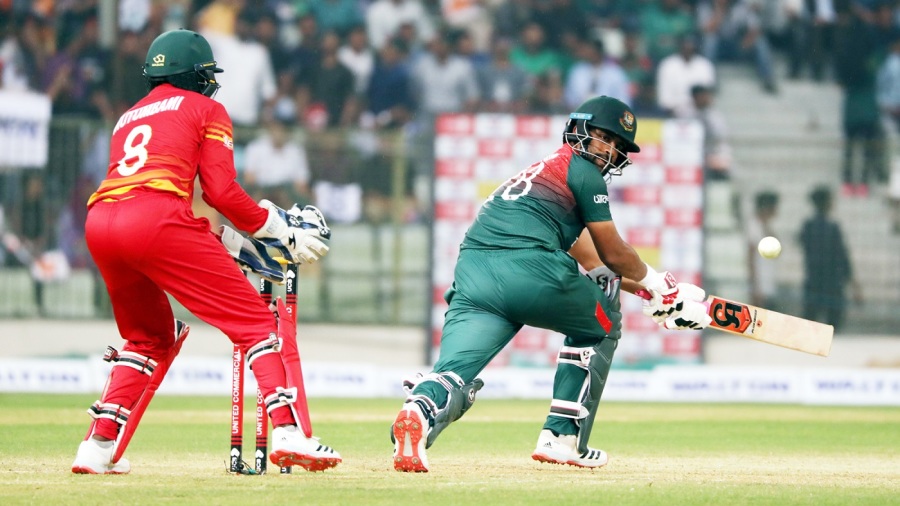 As Bangladesh look to complete a 100% win record against Zimbabwe in this home season, their performance in this series seems to have re-energised some of their players, ahead of a pretty busy year in which they have a lot to prove without Shakib Al Hasan in action for most of it.

On Monday, Bangladesh thrived on another good start from Tamim Iqbal and Liton Das, who paced themselves very well during the powerplay and the 4.2 overs thereafter. But even after both returned to the dugout, the home side didn’t slow down as Soumya Sarkar added 40 runs with Mushfiqur Rahim and 54 in 4.1 overs with captain Mahmudullah.

Bangladesh calmly defended the 200 runs, with Mustafizur Rahman and Aminul Islam taking three wickets each. They were well backed up by Mohammad Saifuddin and Shaiful Islam, and it looked like they didn’t even miss the stability of a left-arm spinner. Mahmudullah perhaps can have one of his spinners take on a few more pressure overs in the match, even though it is certain that Mustafizur and Saifuddin are his gun bowlers at the death.

Zimbabwe meanwhile are lurching from one problem after another. Their captain Sean Williams has said that he is disappointed with the lack of attention to detail from his team-mates. He is also strongly backing his top and middle-order, particularly Brendan Taylor who has had an unusually light tour.

They will once again bank on their experienced middle-order, but they also must realise that the time for learning is over for some of their bowlers. Carl Mumba and Donald Tiripano must have something to show for by the end of this tour, while Chris Mpofu had a poor outing, conceding 58 from his four overs in the first T20I. Zimbabwe also depend heavily on Sikandar Raza’s offspin, although it was strange to see them not use Tinotenda Mutombodzi at all on Monday.

Aminul Islam finished with 3 for 34 from his three overs, although he would consider himself lucky to take Sean Williams’ wicket with a full-toss. Aminul also got hammered for three sixes and a couple of fours, but more accuracy will give his captain the trust to use him more in crunch situations.

Tinashe Kamunhukamwe smashed the first two balls of Zimbabwe’s chase for fours, but thereafter couldn’t quite time the ball well enough to find more big hits. He hardly batted like a T20I debutant, as he went for swing after swing to find boundaries.

Bangladesh have one last chance to take a look at young pace bowler Hasan Mahmud and left-arm spinner Nasum Ahmed in the second T20I.

Zimbabwe could give a chance to Charlton Tshuma, Ainsley Ndlovu or Regis Chakabva, as they look for the right combination against Bangladesh.

Shere Bangla National Stadium will be pleasant for batting again and there seemed to be very little dew. The weather remains clear.