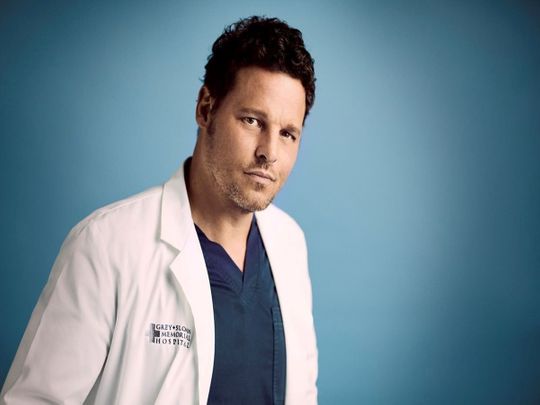 ABC’s long-running medical drama ‘Grey’s Anatomy’ said goodbye to reformed bad boy Dr. Alex Karev, played by Justin Chambers, on Thursday. The network also posted a video retrospective of the character’s time on the show to YouTube. Chambers’ departure leaves Ellen Pompeo’s “dark and twisty” protagonist Meredith Grey as the last of the five central characters then surgical interns still on the show, which launched in 2005. (Chandra Wilson, as no-bull chief of surgery Miranda Bailey, and James Pickens, Jr, as eminence grise James Webber, are the only other original cast members to remain.)

In the episode, Karev sends four handwritten letters to his wife and hospital colleague, Jo (Camilla Luddington), Meredith, Bailey and Webber. He explains that he has left Jo for his old flame, Izzie Stevens (played by original cast member Katherine Heigl). He also reveals that he and Izzie have twins together, conceived with frozen embryos after her character left the show in Season 6. Until last week, Jo and viewers were under the impression that Karev was visiting his ageing mother in Iowa.

The reaction of fans on social media ranged from disbelief to fury, with a number threatening to quit ‘Grey’s’ entirely this in its 16th season on air. The response was reminiscent of another abrupt exit, similarly cobbled together after an actor left the show for greener pastures: The death of Dan Steven’s Matthew Crawley in a car crash in ‘Downton Abbey’.

Chambers unexpectedly announced his departure from the series in January, saying in a statement to The Times that he “hoped to diversify my acting roles and career choices.” His last appearance on the show came in November’s “My Shot,” which featured patients from the annals of ‘Grey’s’ coming to Meredith’s defence as she vied to protect her medical license.

“It is nearly impossible to say goodbye to Alex Karev,” showrunner and executive producer Krista Vernoff said in a statement Thursday. “That is as true for me and for all of the writers at ‘Grey’s Anatomy’ as it is for the fans. We have loved writing Alex. And we have loved watching Justin Chambers’ nuanced portrayal of him. For 16 seasons, 16 years, we have grown up alongside Alex Karev. We have been frustrated by his limitations and we have been inspired by his growth and we have come to love him deeply and to think of him as one of our very best friends. We will miss him terribly. And we will always be grateful for his impact, on our show, on our hearts, on our fans, on the world.”

Chambers is not the first performer to leave ‘Grey’s’ suddenly in the course of its run. See: Heigl, Isaiah Washington, and Patrick ‘McDreamy’ Dempsey.

Fans of the series had speculated about Karev’s fate since the news broke in January that Chambers’ final episode had already aired a number with consternation over what they saw as his mistreatment. Even before the shocker, the frustration with the way the character was being written off the show gave rise to the Twitter hashtag #JusticeForKarev.

The scale and suddenness of the episode’s revelations are unlikely to quiet that criticism: After all, until ‘Leave a Light On’, the character’s disappearance had largely been marginal to the series’ plot, save for an episode last month in which Jo compares her situation to a bear attack in which a man’s severed nose is sewn into his arm for safekeeping.