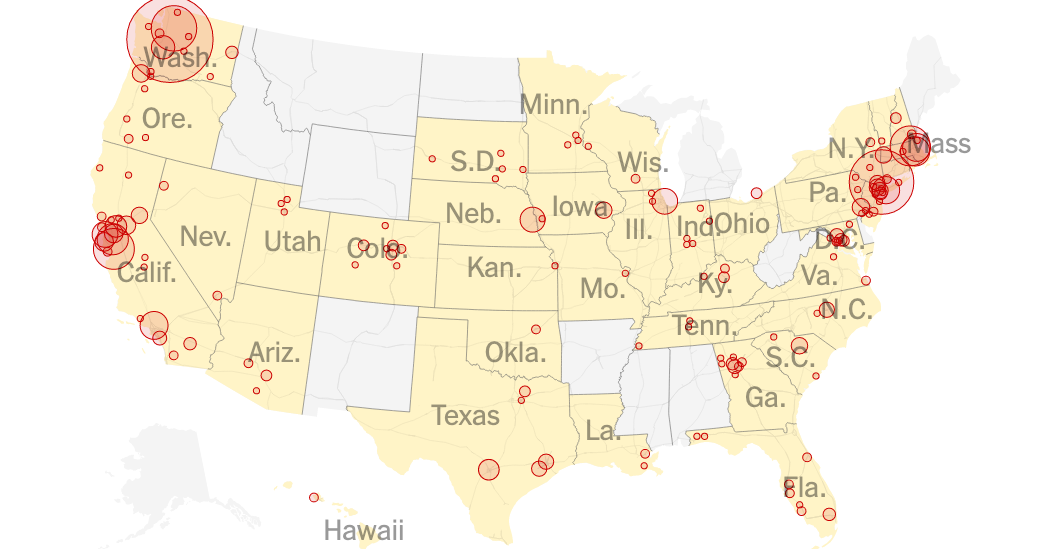 Public events are being scrapped

Worries about the spread of the coronavirus in the U.S. are prompting organizers to cancel sports and cultural events across the country. And they have intruded on the presidential race for the first time: Bernie Sanders and Joe Biden each called off primary-night events scheduled for Tuesday.

The organizers of the Coachella Valley Music and Arts Festival are in talks to postpone it until the fall. Austin, Texas, has called off its annual South by Southwest festival. The rock band Pearl Jam scrapped the first leg of an upcoming tour.

“The whole live music industry is really being shaken and challenged by this,” says Ben Sisario, who covers music for The Times. “It’s a business model about a large amount of people coming together in a small space.”

Leaders of the nursing-home industry are calling for sweeping new precautions to protect residents, including an end to social visits by relatives and friends.

Receptionists should screen everyone — staff members, family members, contractors and government workers — for signs of illness, and admit only those who are healthy and have essential business.

The coronavirus has been most dangerous to older adults and patients with chronic health problems — the very people who reside in nursing homes. At least 18 residents of one hard-hit facility in Kirkland, Wash., have died, and four other facilities in the Seattle region have cases.

Defenseless: Seasonal flu is also a menace to nursing homes, but the homes can fight back against the flu with vaccines and antiviral drugs used protectively. Nothing like that is yet available to check the coronavirus.

What you can do: If you have a loved one in a nursing home or assisted living facility, research the facility — especially staffing and sanitation ratings — and ask about the plan for a potential outbreak. If you make the difficult decision to relocate your loved one, be sure to account for all their medical and logistical needs.

On the first day of nationwide restrictions on movement and public gatherings, Italians dutifully stayed away from the country’s streets, shops, churches and soccer fields, our Rome bureau chief, Jason Horowitz, reports.

Some of the country’s busiest tourist spots are almost deserted. “In Rome, water cascaded out of the usually mobbed Trevi Fountain,” Jason wrote, “but there was no one around to see it.”

Matteo Renzi, a former prime minister, told The Times that sweeping measures like the government’s decree were necessary to protect the rest of the continent.

“Today, the red zone is Italy,” he said, but unless other countries also take drastic steps, soon “the red zone will be Europe.”

Living under lockdown: “In just two weeks, all the usual certainties have gone,” an Opinion contributor writes from Milan. “It’s been a spiritual exercise in letting go.”

Steps to take against the coronavirus. This should sound familiar by now, but we’ll keep repeating it: Wash your hands; stay at least six feet away from others; and check in with people who are less able to prepare.

How to boost your immune system: There’s no magic pill or miracle food, but you can manage your stress (through meditation, for example), improve your sleep habits, check your vitamin D levels, avoid excess alcohol and eat a healthy diet.

Do you have an upcoming cruise? You can expect increased health screenings and temperature checks before boarding. And if you’re looking for a way out, you may be in luck: Some companies are loosening their typically strict cancellation policies.

You kid’s school is closed — now what? Education may be disrupted, but that doesn’t mean your children have to lose out, starting with predictable, consistent routines at home that provide a sense of security.

Cellphones are germ vehicles and hard to clean. When we go outside, we place cellphones in a plastic Ziploc bag: The touch screen still works. When we’re back home, we take them out of the bag.