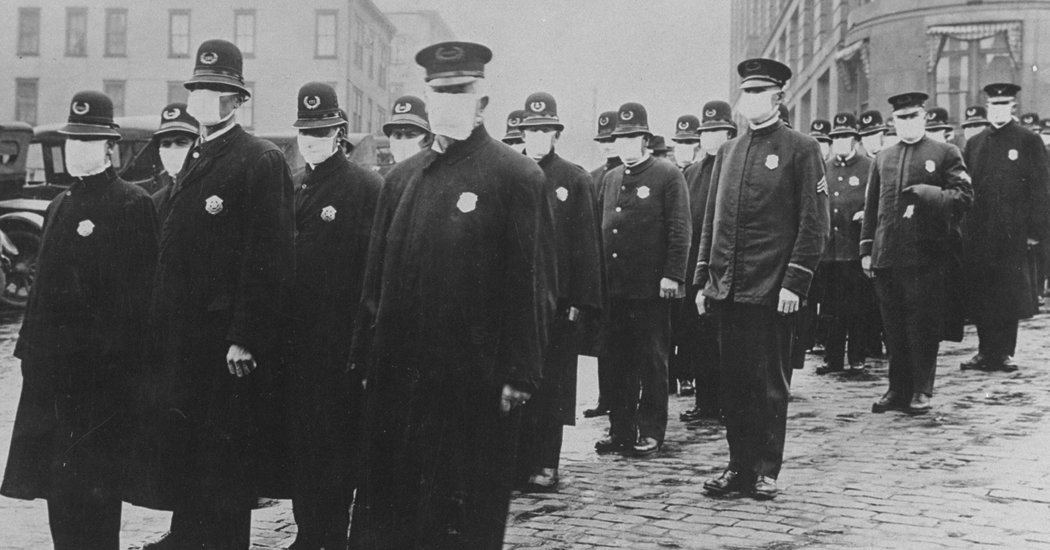 It was a disease so awful that it terrified people for generations.

The 1918 flu pandemic, thought to be the deadliest in human history, killed at least 50 million people worldwide (the equivalent of 200 million today), with half a million of those in the United States. It spread to every part of the world, affecting populations in Japan, Argentina, Germany and dozens of other countries.

Maybe most alarmingly, a majority of those killed by the disease were in the prime of life — often in their 20s, 30s and 40s — rather than older people weakened by other medical conditions.

As the coronavirus spreads around the world and public anxieties spike, comparisons between today’s situation and the Spanish flu pandemic of 1918 are proliferating in journalistic outlets and on social media.

While the fearful atmosphere — surgical masks, stockpiling of food and avoidance of public gatherings — and potential economic ramifications are like those of 1918, the medical reality is quite different.

“Nurses often walked into scenes resembling those of the plague years of the fourteenth century,” wrote the historian Alfred W. Crosby in “America’s Forgotten Pandemic.” “One nurse found a husband dead in the same room where his wife lay with newly born twins. It had been twenty-four hours since the death and the births, and the wife had had no food but an apple which happened to lie within reach.”

In 1918, the world was a very different place, even without the disruptive influence of World War I. Doctors knew viruses existed but had never seen one — there were no electron microscopes, and the genetic material of viruses had not yet been discovered. Today, however, researchers not only know how to isolate a virus but can find its genetic sequence, test antiviral drugs and develop a vaccine.

In 1918, it was impossible to test people with mild symptoms so they could self-quarantine. And it was nearly impossible to do contact tracing because the flu seemed to infect — and panic — entire cities and communities all at once. Moreover, there was little protective equipment for health care workers, and the supportive care with respirators that can be provided to people very ill with coronavirus did not exist.

With a case fatality rate of at least 2.5 percent, the 1918 flu was far more deadly than ordinary flu, and it was so infectious that it spread widely, which meant the number of deaths soared.

Researchers believe the 1918 flu spared older people because they had some immunity to it. They theorize that decades earlier there had been a version of that virus, one that was not as lethal and spread like an ordinary flu. The older people living in 1918 would have been exposed to that less lethal flu and developed antibodies. As for children, most viral illnesses — measles, chickenpox — are more deadly in young adults, which may explain why the youngest were spared in the 1918 epidemic.

The new coronavirus tends to kill older people and those with underlying medical conditions, and it does not seem to kill children. All of which means it will have far less effect, if any, on life expectancy.

As for the coronavirus case fatality rate, it is not yet known, but the latest data from South Korea, with 7,478 confirmed infections, shows one in line with that of seasonal flu. After testing 100,000 people for the virus, the country appears to have a case fatality rate of .65 percent.

What the current situation does have in common with 1918, though, is the tenor of public concern.

Among the first places the 1918 flu arrived in the United States was Fort Devens, near Boston. So many young soldiers were sick, and so many were dying, that the Surgeon General sent four of the nation’s leading doctors to investigate.

One of them, Dr. William Vaughan, later recalled: “Hundreds of stalwart young men in the uniform of their country, coming into the wards of the hospital in groups of ten or more. They are placed on the cots until every bed is full, yet others crowd in. Their faces soon wear a bluish cast; a distressing cough brings up the blood stained sputum. In the morning the dead bodies are stacked about the morgue like cord wood.”

On Oct. 3, 1918, Philadelphia closed all schools, churches, theaters, pool halls and other gathering places. Undertakers were overwhelmed — some funeral homes increased their prices sixfold and some even made the bereaved bury their own dead.

In Tucson, Ariz., the board of health forbade people to venture out in public without a mask. In Albuquerque, where schools and theaters were closed, a local newspaper wrote, “the ghost of fear walked everywhere.”

Similar actions are being taken today. Seattle has closed some public schools. The South by Southwest festival in Austin, Tex., has been canceled. Apple asked employees to work from home. More than 2,700 people are under some sort of quarantine in New York City. And some Costco stores are having trouble keeping bottled water in stock.

But so far this year, the annual epidemic of seasonal flu in the United States is proving much more devastating than the coronavirus.

The Centers for Disease Control and Prevention reports that there have been at least 34 million infected with flu this season, 350,000 hospitalizations and 20,000 deaths. So far, coronavirus has killed 27 people in the United States.

For the economy, the effects of the 1918 flu, despite factory closings and social disruptions, were hard to disentangle from the profound ones of World War I. The world was not as interconnected as it is today, and by the summer of 1919, the pandemic had ended.

Coronavirus is already having significant impacts on the stock market and other aspects of the economy, but the long-term consequences remain to be seen.