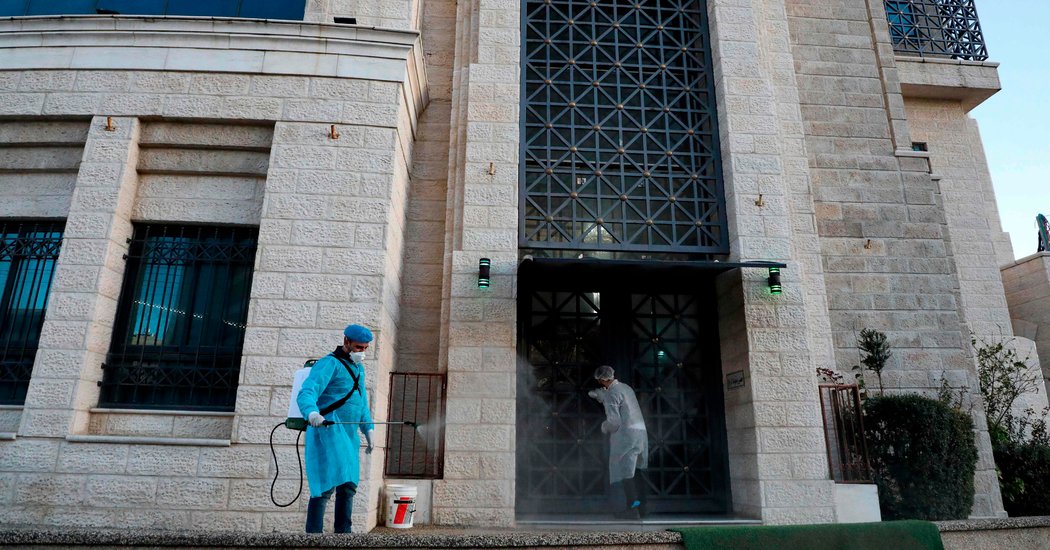 Countries ramp up their restrictions to limit coronavirus spread

Israel, which has 41 confirmed cases of the coronavirus, announced a 14-day quarantine for all international arrivals, joining a list of countries ratcheting up their control measures.

Saudi Arabia closed off air and sea travel to nine countries; Egypt limited access to its most famous temples along the Nile at Luxor; governments across Europe canceled major events; and the U.S. considered instituting its own restrictions as its cases approached 600.

The biggest example on everyone’s mind — and maybe a case study for the West — was Italy, where a lockdown affecting 16 million people continued, but was complicated by protests in at least two dozen prisons. With 9,172 cases by Monday, Italy surpassed South Korea as the site of the largest outbreak outside China.

Living under lockdown: “In just two weeks, all the usual certainties have gone,” writes an Opinion contributor living in Milan. “It’s been a spiritual exercise in letting go.”

Afghanistan’s capital remained on lockdown most of Monday after a barrage of rockets hit the city, not far from a strange scene where the president and his chief rival were each taking the oath of office, separated by only a thin wall.

Though some in the audience ran for cover, President Ashraf Ghani refused to leave the stage and urged calm. “I am not wearing an armored vest,” Mr. Ghani said, opening his jacket. “We have seen big attacks. A couple explosions shouldn’t scare us.”

The attacks came in the midst of a complicated peace process: Talks between the Afghan government and the Taliban, which were supposed to start on Tuesday, are now delayed.

Background: President Ghani, the winner of a bitterly disputed vote, had announced he was going ahead with his inauguration. His rival, Abdullah Abdullah, who has accused him of winning unfairly, promised he would hold his own next door.

Context: “It feels like uncharted territory,” Mujib Mashal, a Times correspondent in Afghanistan, told me in a WhatsApp message. “Over the past 18, 19, years of U.S. presence, three out of the four presidential elections have been disputed. But at no point did we go to a situation where we had two governments declared. This is the first time it’s happened.”

U.S. stocks suffered their worst drop since the height of the financial crisis more than a decade ago. The S&P 500 Index fell another 7 percent; in Europe, major stock benchmarks were down more than 7 percent. Here are the latest updates from the markets.

The losses were part of the market reaction to the coronavirus epidemic, but the immediate cause for the sell-off was a crude oil price war between Saudi Arabia and Russia, which could ravage oil producers in Venezuela and Iran and even shale oil companies in the United States.

Crude oil lost nearly a quarter of its value — the kind of plunge that has not happened in nearly 30 years — which led to a collapse in share prices of companies and businesses that service the oil and gas sector. Manufacturers and banks, which are sensitive to concerns about the economy, also tumbled.

If you have 9 minutes, this is worth it

‘I want to be an ambassador of hope’

A year ago, Adam Castillejo, above, was introduced to the world as the “London Patient,” only the second person to be cured of H.I.V. Mr. Castillejo, 40, has now chosen to reveal his identity, after realizing that his story carried a powerful message of optimism.

“This is a unique position to be in,” he said. “A unique and very humbling position.”

U.S. presidential race: Several primaries are taking place on Tuesday, including the crucial state of Michigan, as the industrial Midwest takes the focus in the contest to face President Trump between Senator Bernie Sanders and former Vice President Joe Biden.

North Korea: The country launched multiple projectiles in its second weapons test in a week, the South Korean military said.

MH17 trial: Four Russian former agents are being tried in absentia for the shooting down of a passenger jet over eastern Ukraine in 2014. The trial may implicate senior Kremlin officials.

Snapshot: Above, Prince Harry and his wife, Meghan, at Westminster Abbey for a Commonwealth Day celebration — their final royal engagement. They will head to their new home in Western Canada after this to begin a life of semi-royalty.

What we’re listening to: This Radio Lab podcast about a reporter, Latif Nasser, who discovers a Guantánamo Bay detainee with the same name as him who was cleared for transfer in 2016 but is still stuck inside the prison. “The show takes you on a wild journey to Morocco, Sudan and inside the barbed-wire U.S. military prison in Cuba,” says Alisha Haridasani Gupta, who writes In Her Words.

Cook: This old-school recipe for smothered chicken, which our Food editor, Sam Sifton, calls “the culinary equivalent of a weighted blanket and a nap on the couch: safe and homey” in his newsletter.

Read: In her third memoir, “Untamed,” Glennon Doyle, who founded the Christian parenting blog Momastery, discusses her divorce from her husband and her marriage to the soccer star Abby Wambach.

Watch: A two-part episode of “Oprah’s Book Club” featured Jeanine Cummins, whose novel about a Mexican woman and her son ignited a backlash.

Smarter Living: Your colleagues probably don’t read a lot of what you write — emails, memos, slacks — but there are ways to fix that.

Our Istanbul bureau chief, Carlotta Gall, is covering a tense moment in Syria’s nine-year civil war, as government forces backed by Russian warplanes have been closing in on the country’s last rebel-held city. She recently chatted over email with Mike Ives, on the Briefings team, about what it’s like to report there.

Did your latest trip to Syria feel any more risky than previous ones?

But I saw that the Syrians around us were very nervous when we received radio reports that Russian war planes were in the sky. They have learned that Russian jets are extremely dangerous and unleash devastatingly powerful bombs, and they seem to target civilian areas frequently, especially hospitals, schools and markets.

The most powerful quote in your piece — “The only choice is to wait for death” — comes from a woman who had fled to Idlib city and settled in a nearby town. It was relayed by her son Hikmat al-Khatib, an orthopedic surgeon. What’s his story?

P.S.
• We’re listening to “The Daily.” Our latest episode is about an abortion case before the U.S. Supreme Court.
• Here’s our Mini Crossword, and a clue: Underneath (five letters). You can find all our puzzles here.
• Our reporters felt as if they were in a thriller at times while reporting on Peter Nygard, a wealthy Canadian playboy accused of sexually abusing poor teenage girls in the Bahamas.