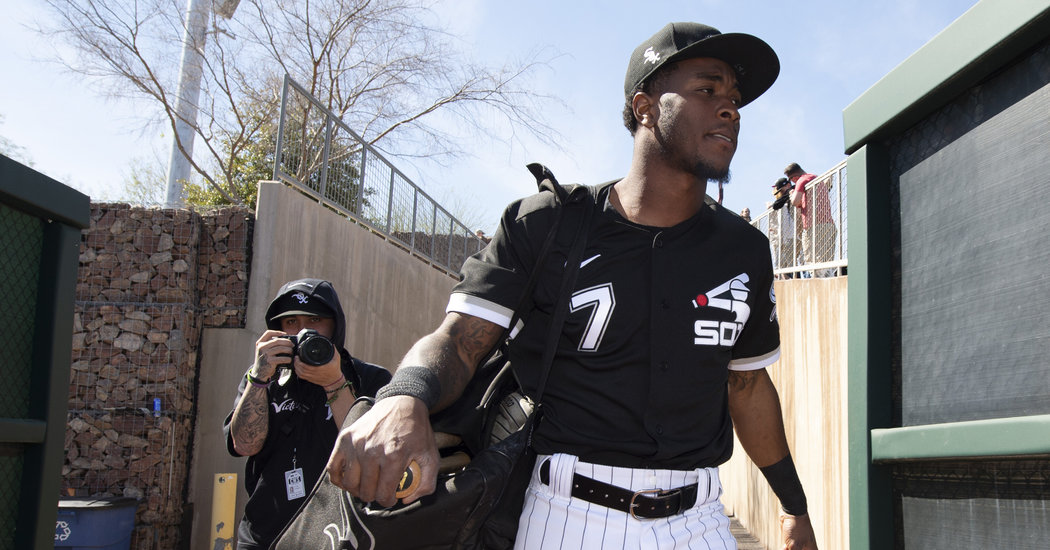 GLENDALE, Ariz. — Tim Anderson is a study in extremes. Anderson, the shortstop for the Chicago White Sox, had the highest batting average in the majors last season. He also made the most errors. He once was terribly shy. Now he is so outgoing that he has his own YouTube channel. He wants to be a superstar, he said. He wants to be everywhere.

“I’m going to be the best,” Anderson said recently, at his corner locker in the White Sox clubhouse. “I don’t know when, I don’t know how, but I know what to do, nobody can outwork me, and I’m determined to get there. It may not be this year; it may not be next year. But it’s coming.”

Anderson, 26, suggested the White Sox marketing slogan for this season: “Change the Game.” He is a unifying force in a young clubhouse, encouraging teammates to ask him anything and vowing to take back Chicago — where he lives year-round — from the more popular Cubs.

“Every corner, you’re going to see a White Sox hat,” Anderson said. “Black and white, man — it’s the most neutral hat in the game. You can wear it with anything.”

When the White Sox introduced that look, in the early 1990s, it instantly became a sensation in the hip-hop world. With Tupac Shakur, Dr. Dre, Aaliyah and others representing the team, the White Sox seemed cool and stylish. The team won its division in 1993 — the year Anderson was born — with African-American stars like Frank Thomas, Tim Raines, Ellis Burks and Bo Jackson out front.

Now, Anderson’s presence highlights another extreme, a reminder of an unmistakable change in the game: He is the only African-American player on the White Sox.

“Tim and I talk about this all the time,” said Ken Williams, the White Sox executive vice president, who is black. “We try to put together the best team that we can, regardless of race. But I would be lying if I didn’t tell you that it would be nice to give him some company.”

Anderson was a dynamic high school point guard who led his team to an Alabama state title. He dropped baseball for a couple of years in high school because of leg injuries, returning to the sport as a junior, mainly because he thought he was too short — 6 feet 1 inch — for the N.B.A. In 2013, when he hit almost .500 for a community college in Mississippi, the White Sox made him their first-round draft pick.

Williams, who built the White Sox’ 2005 championship team as general manager, idolized Willie Mays as a boy. Anderson’s favorite player was Ken Griffey Jr. In the late 1980s, when Williams played in the majors and Griffey turned pro, major league rosters were nearly 20 percent African-American, according to data from Major League Baseball. For the last several seasons, that number has hovered around 8 percent.

The league runs several grass-roots and developmental programs to make baseball more accessible to all communities. But it has clearly felt the absence of cross-cultural stars who once helped popularize the game.

“They brought a little flavor, and that’s something we need right now,” Anderson said. “But let’s be honest — we are playing a white man’s sport. Sometimes it’s tough for a black guy to come into a sport and kind of be themselves.

“That was kind of hard for me when I first came up. All the guys were older than me, so before the game I didn’t really have nobody to hang out with. I’d go eat by myself. I had teammates, and I felt connected with them, but once I left the field, it was like: ‘What do I do now?’”

Today, Anderson said, the racial makeup of the team means nothing to him because he gets along with everyone. (“I’d be around purple people and I’d fit in,” he said.) But he has shown a curiosity about the history of African-Americans in baseball and society, touring the Negro Leagues Baseball Museum on a trip to Kansas City in 2018 and the National Center for Civil and Human Rights in Atlanta last summer.

Last year, Anderson hosted a viewing of the film “42,” about Jackie Robinson, for members of the White Sox’ ACE program, a youth baseball initiative in Chicago that has produced 28 drafted players and more than 200 college scholarship recipients. His personal foundation, Anderson’s League of Leaders, helps children affected by violence in Chicago and Tuscaloosa.

“He’s so great for the community of Chicago,” said Joe McEwing, a coach for the White Sox. “He has that platform and he’s using it — on the field, off the field, at home. He’s at that moment now where he knows what he can do.”

Anderson said he reached a career crossroads last April, after flinging his bat to celebrate a homer off Kansas City’s Brad Keller, who drilled Anderson with a fastball in his next at-bat. The benches cleared and the league suspended Keller for five games, while giving Anderson a one-game suspension for his use of a racial epithet during the fracas.

The incident renewed the debate about celebration etiquette in a stodgy sport, and Anderson heard criticism about being cocky and not respecting the game. Before then, he said, he had tried to stay inconspicuous in public. The backlash inspired him to take a more public persona, giving more revealing interviews and broadening his reach on social media.

“I had no other choice,” he said. “At that point people already labeled me. I had to open up and let people know who I am. Now I’m OK with being me. You’re either going to like me or you’re not, and either one is fine.”

The Royals — then managed by the decidedly traditional Ned Yost — were not fine with Anderson. Catcher Salvador Perez had jawed with Anderson in 2018 after a home run, and last May, a month after the Keller incident, another pitcher, Glenn Sparkman, was ejected for plunking Anderson in the helmet.

“We had kind of a history with him in years past, so it was more of a team thing,” Keller said last week. “But you know what? Guys play the game how they want to, and if that’s how he plays it, so be it.”

Williams told Anderson that he would have hit him, too, if he had been in Keller’s position. But that did not mean Williams disapproved of Anderson’s behavior. Reggie Jackson played with flamboyance, after all, and Williams would sneak into the Oakland Coliseum to watch him in the 1970s. He understands the appeal of expressive, passionate players.

“The game isn’t for me and my generation or generations that have come before me,” Williams said. “The game is for the kids playing now and the kids that are watching. And to keep it fresh and young, sometimes that conflicts with old-school ideas.”

The only way he can play, Anderson said, is to be true to himself. That is why his batting title makes him especially proud — he did it his way, by refusing to let a good pitch go by. In a sport that now emphasizes patience at the plate, Anderson walked only 15 times.

No qualified hitter in 90 years had such a high average (.335) with so few walks. But Anderson has exceptionally quick hands and worked diligently with a tee to stay inside the ball and concentrate on hitting up the middle or the opposite way. He is always in a hurry to swing.

Anderson is just as blunt about his defense, mentioning his league-leading error total (26) without being prompted. The idea, he said, is to embrace a weakness he knows he can fix. McEwing, who coaches Chicago’s infielders, said Anderson played shortstop like a point guard as a rookie in 2016, pursuing every ball with abandon and forcing many throws. Now he knows the nuances, McEwing said, and anticipates plays instead of simply reacting.

When Anderson speaks openly of winning a Gold Glove, it sounds plausible to his coach.

“I think he can do anything he wants on a baseball field,” McEwing said. “I’d never put a limit on what he could be and where he could go.”

Neither would Anderson, who revels in all he has overcome: growing up while his father, Tim Anderson Sr., was in prison on a cocaine-trafficking charge; breaking his leg twice as a teenager; and losing his best friend, Branden Moss, to gun violence in 2017.

Those hardships have made his success even sweeter, Anderson said, and convinced him he can spread his brand of baseball to the African-American community and beyond.

“You need a great example,” Anderson said. “Who’s going to be that example? I am. I’m here to change the game. I’m here to show these kids that it’s OK, baseball’s cool, and you can play it.”