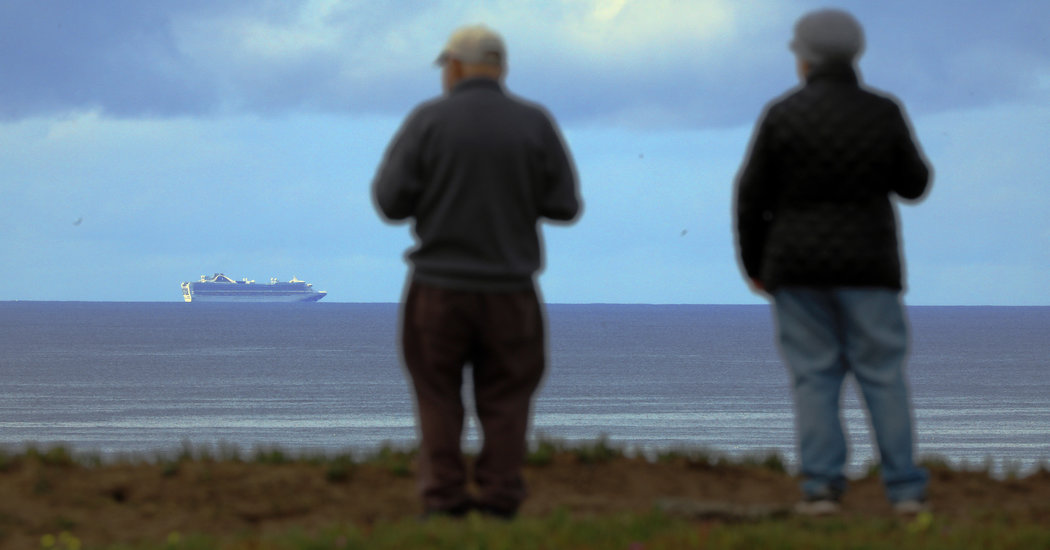 The State Department on Sunday advised Americans against traveling on cruise ships, warning that they presented a higher risk of coronavirus infection and made U.S. citizens vulnerable to possible international travel restrictions, including quarantines.

The decision came after President Trump resisted requests from administration officials to publicly urge older travelers to avoid cruise ships and plane travel, saying he thought it would harm those industries, according to two people familiar with the discussions.

“U.S. citizens, particularly travelers with underlying health conditions, should not travel by cruise ship,” the State Department wrote in an alert posted to its website Sunday.

Americans should not rely on being evacuated if other countries subject them to quarantine, the department said.

The guidance signaled another escalation in the Trump administration’s efforts to ward off the fast-growing spread of the virus, and another instance of what appeared to be separation between health officials and the president, who has repeatedly registered skepticism over making statements he believes are alarmist.

It came as federal and state officials scrambled to contain a cluster of cases on the 3,500-passenger Grand Princess, which has idled off the coast of California. Twenty-one people onboard tested positive for the coronavirus, and it was on its way to dock on Monday at the Port of Oakland, the vessel’s operator said.

The decision to caution Americans capped weeks of discussions on the Trump administration’s interagency task force about how to communicate alarm about cruise ships after hundreds of Americans, including some who tested positive for the virus, were evacuated from the Diamond Princess off the coast of Japan, a process rife with confusion and disorder.

It was Vice President Mike Pence, who is overseeing the federal government’s coronavirus efforts, who signed off on the State Department’s announcement and Stephen E. Biegun, the deputy secretary of state and another task force member, who formalized it, a senior official familiar with the decision said. The final call on Sunday did not reach Mr. Trump’s level, the official said.

The White House did not immediately respond to an email seeking comment.

According to an official with knowledge of the talks, at least four members of the task force pushed for the State Department to caution Americans against cruises: Dr. Robert R. Redfield, the director of the Centers for Disease Control and Prevention; Dr. Anthony S. Fauci, the director of the National Institute of Allergy and Infectious Diseases; Dr. Robert P. Kadlec, the assistant health secretary for preparedness and response; and Dr. Deborah L. Birx, the new coronavirus response coordinator.

The talks picked up last week as the Grand Princess waited for a confirmation of possible infections on the ship. A 71-year-old man died after traveling on a previous leg of the cruise, a round trip from San Francisco to Mexico. Another passenger from that leg of the trip also tested positive for the virus and is being treated in California.

After the Grand Princess docks, those aboard will be taken to military facilities around the country to be tested and quarantined for 14 days, according to the Department of Health and Human Services.

About 1,000 passengers who are California residents will go to Travis Air Force Base in Fairfield, Calif., or the Marine Corps Air Station Miramar in San Diego. Residents of other states will be taken to Joint Base San Antonio-Lackland in Texas or Dobbins Air Reserve Base in Marietta, Ga.

More than 500 coronavirus infections have been confirmed by lab tests in the United States as of Sunday, and 22 people have died so far from them.

“This is a fluid situation,” the State Department notice said, adding that the C.D.C. recommends that older adults, in addition to those with underlying health problems, should avoid any setting that makes them more vulnerable to disease.

In response to the State Department, Carnival Corporation said in a statement on Sunday that its brands, which include Carnival Cruise Line, Holland America Line, Princess Cruises and Cunard, enhanced its health screening protocols to include thermal scans and temperature checks before boarding and onboard.

“We are currently in discussions with the C.D.C., World Health Organization and other health officials,” the statement said, noting that the cruise industry committed to an aggressive response plan when it met with Mr. Pence on Saturday. “The health and safety of our guests and crew is our highest priority, and cruising remains one of the most attractive vacation options available.”

“Absolutely don’t get on a cruise ship,” he said.