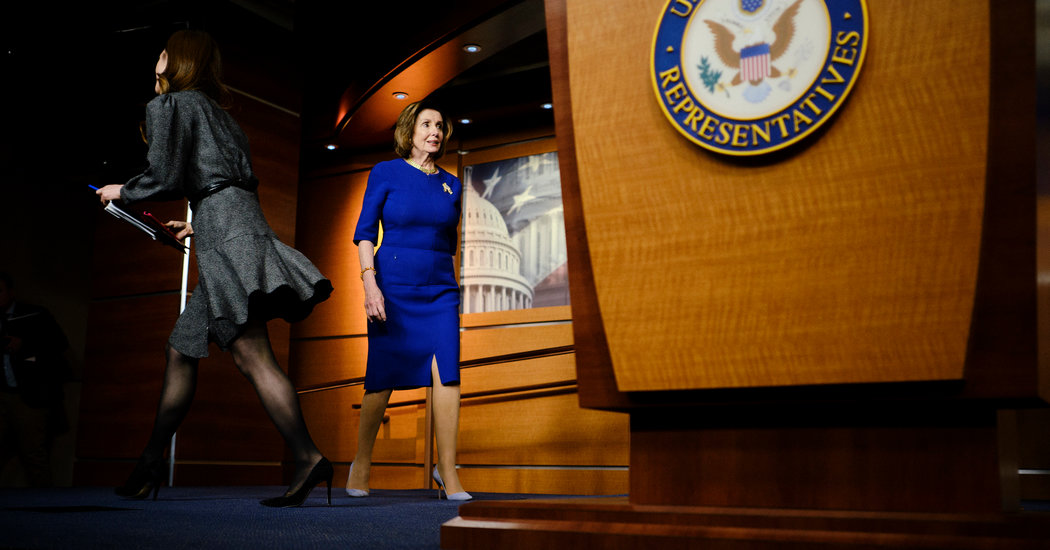 WASHINGTON — Speaker Nancy Pelosi is preparing to unveil a sweeping plan to lower the cost of health care, moving to address the top concern of voters while giving moderate Democrats who face tough re-election races a way to distance themselves from the Medicare for All plan embraced by the progressive left and derided by Republicans as socialism.

The legislation, timed to coincide with the 10th anniversary of the Affordable Care Act, is part of a major push by Democrats to position themselves as the party of health care before the 2020 elections. Former President Barack Obama will support the effort, appearing with Ms. Pelosi at American University in Washington on March 23, 10 years to the day he signed the Affordable Care Act into law.

While the measure has little chance of survival in the Republican-controlled Senate, it is the latest evidence that Democratic leaders, determined to protect their House majority and the moderate lawmakers who helped them to power, are looking for ways to distinguish their rank and file from the party’s presidential nominees.

The plan bears no resemblance to Medicare for All, the national health insurance system championed by Senator Bernie Sanders of Vermont, the self-described democratic socialist. And it omits a “public option” to create a government-run health insurer, an idea embraced by former Vice President Joseph R. Biden Jr., the Democratic front-runner.

In steering clear of the ideas promoted by both leading presidential candidates, Ms. Pelosi is hoping to protect the so-called front-liners who flipped Republican seats in 2018 and delivered Democrats the majority.

The speaker’s new proposal is aimed at reducing costs under the current health bill, according to people familiar with it, who insisted on anonymity to describe a plan that was not yet public. Details are still being finalized, and Ms. Pelosi — who was to meet Monday evening with Democratic committee chairs to discuss a response to the coronavirus epidemic — has not yet shared them with her rank and file. The speaker’s office declined to comment.

The plan could be unveiled as early as this week, though coronavirus could upend that timeline. In eschewing Medicare for All, Ms. Pelosi is turning away from a proposal that does not have the votes to pass the House and has divided Democrats on Capitol Hill.

Instead, the speaker is expected to propose a series of steps to make health care more cost-effective under the Affordable Care Act, including expanding tax credits and subsidies to help people buy insurance and creating a national program to help cover expenses for those with medical conditions. The plan is expected to spotlight ideas put forth by vulnerable freshmen like Representatives Lauren Underwood of Illinois and Angie Craig of Minnesota.

But Ms. Pelosi’s reluctance to embrace Mr. Sanders’s bold vision may draw the ire of her caucus’ left wing, which is pushing for a vote on Medicare for All. Her decision to shy away from the public option is especially notable, given that the House included such a system when it passed its version of the Affordable Care Act in 2019. The provision was later stripped out by the Senate.

“I think it’s way too cautious an approach,” said Representative Ro Khanna, Democrat of California and a national co-chairman of Mr. Sanders’s campaign, though he added that Democrats would most likely embrace any plan that lowered costs, even incrementally.

“No one is opposed to a pragmatic step that’s feasible,” he said. “What we’re opposed to is a lack of imagination and boldness in not giving a vote on policies that economics and health experts are saying is what the country needs.”

But Leslie Dach, a Democratic strategist and the chairman of Protect Our Care, an advocacy group, said it was important for Democrats to spotlight what they could agree on, especially after a string of presidential primary debates where Democrats beat up one another over their health care plans instead of going after President Trump.

“If you do the polling, 80 percent of the people want to lower costs, and they want to protect critical things like pre-existing conditions. That unifies the country and unifies the party,” Mr. Dach said. “What we have had is a debate with tremendous missed opportunities. Democrats should have been up there reminding people what Donald Trump has been doing to their health care, not arguing as much about where they want to go.”

Polls show the public is deeply concerned about the high cost of health care but divided over what to do about it. A recent poll by the Kaiser Family Foundation found that a slight majority of respondents — 53 percent — favored a Medicare for All approach that would cover everyone on a single government plan. A much larger majority, 65 percent, favored a public option.

Republicans have latched onto Mr. Sanders and Medicare for All as a way to paint Democrats as socialists, a strategy that is unlikely to change no matter what proposal Ms. Pelosi puts forth or who becomes the Democratic nominee.

“Voters have watched as the Democratic Party has moved further and further left, to the point where now a majority of their members support canceling private health care entirely for BernieCare,” said Dan Conston, the president of the Congressional Leadership Fund, a political action committee affiliated with House Republicans. Such positions, he said, “make the argument that Democrats have become socialists a particularly effective one, no matter how much they now try to run away from it.”

The Affordable Care Act anniversary comes as the law itself is in fresh peril. It has survived numerous Republican attempts and a vow by Mr. Trump to repeal it, as well as a string of court challenges.

But the Supreme Court, which has twice ruled to leave most of the provisions intact, recently agreed to hear a third case, which could wipe out the Affordable Care Act entirely. When Democrats took over the House in January 2019, they voted to intervene in the case, Texas v. U.S., which was brought by conservative state attorneys general seeking to overturn the law.

Democrats campaigned aggressively in 2018 on lowering costs and protecting health coverage, and they have already taken some steps to make good on those promises.

In May, they passed legislation to reverse Trump administration rules that allowed the expansion of health care plans that did not have to comply with the Affordable Care Act’s mandated coverage of pre-existing medical conditions. And in December, the House voted to lower the rising cost of prescription drugs by empowering the federal government to negotiate prices with pharmaceutical manufacturers.

But like most legislation passed by House Democrats, the two health bills are languishing in the Senate, where Senator Mitch McConnell, Republican of Kentucky and the majority leader, refuses to take them up.

The legislation Ms. Pelosi is drafting is based in part on the Protecting Pre-Existing Conditions & Making Health Care More Affordable Act, a measure introduced about a year ago by the three chairmen whose committees have jurisdiction over health care: Representative Frank Pallone Jr. of New Jersey, the Energy and Commerce chairman; Representative Richard E. Neal of Massachusetts, the Ways and Means chairman; and Representative Robert C. Scott of Virginia, the Education and Labor chairman.

That bill aims to lower health insurance premiums by expanding eligibility for premium tax credits beyond 400 percent of the federal poverty line. It also increases the size of tax credits for people in all income brackets. It would create a so-called reinsurance program, which would provide government funds to help insurers offset the cost of patients with expensive medical conditions. And it would make subsidies more generous for people with incomes below 250 percent of the federal poverty line.

Other Democrats, including Ms. Underwood and Ms. Craig, have put forth similar ideas. Ms. Underwood is the chief sponsor of a stand-alone plan to expand tax credits. Ms. Craig is promoting federal funding for states to run their own programs to reduce insurance premiums.

It is measures like Ms. Pelosi’s — not the kind of systemwide overhaul advocated by Mr. Sanders — that House Democrats want to focus on as they seek to maintain their majority.

“Our front-liners have been very focused on their message, which has been strengthening the A.C.A., making sure we’re continuing to cover pre-existing conditions, and making sure that we resist the constant cuts to Medicaid and Medicare and even Social Security that have been proposed,” said Representative Katherine M. Clark, Democrat of Massachusetts and a member of the leadership. “Whatever’s happening on the national level, I don’t think their strategy is going to change.”